Although I grew up in countryside, in the northern of Romania, and I was familiar with the animals in the area such as horses, cows, and sheep, just to mention a few, I was not familiar with alpaca. However, when I arrived in the south of Peru, the province of Ayacucho, I observed alpacas everywhere: by the side of the road, on the hills, and on the mountains. My mission in Peru is to learn about the alpaca wool, its industry, and to implement an income generation project for families who have been victims of the military conflict. Whether I like alpacas or not, I have to learn about them.

Alpacas grow at higher altitudes. They can be found at 3,500 meters above the sea level, and even higher, at 4,600 meters. Alpacas are fed with the natural pasture, which they found on the hills, mountains, and valleys. In Peru, people consider the meat of alpaca one of the best because it has zero cholesterol, and this is because of the altitude where these animals grow, and the food they consume. Alpacheros, people who grow alpacas, grow them for meat and for wool. An alpaca has a life expectancy between 20 and 25 years, and it gives birth every year. 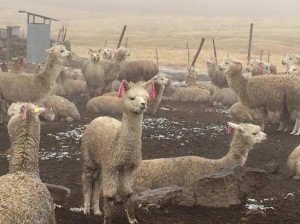 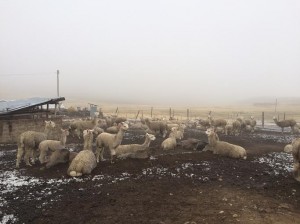 Although the alpaca wool is highly valued, the alpacheros sell the wool at very low prices because they do not add any value to it. In other words, they shear the alpacas, and sell the wool as a raw material. Additionally, they do not separate the fine fiber from the thick, and do not spin or weave it. They spin and weave occasionally for personal use.

The shearing time happens once a year, in April for young alpacas, and in November for the rest of alpacas. During these two periods, a buyer travels from community to community and buys the wool in large quantities at lower prices. If the alpacheros do not sell the wool at the price offered, another buyer is not coming again to buy the wool. This means that the buyer has monopoly over the wool in these communities, and the alpacheros are forced to sell the wool at the price offered.

The alpacheros say that recently the prices of the wool dropped from 9-12 soles to 6-8 soles per pound. On average, an alpaca produces between 4 to 5 pounds of wool annually. The colors of organic alpaca wool come in six varieties: white, light cream, maroon, dark gray, and black. The highest price that a person is making when selling the wool to an intermediary from one alpaca is 60 soles, ($18.30). This means that alpacheros need to feed them, give them treatment against various diseases, protect them from being killed and eaten by wild animals, and finally they make 60 soles in the wool if the buyer offers the highest price, which is 12 soles per pound, but usually this does not happen.