I wanted to share with you a photo of our students in our new computer lab! 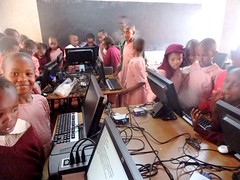 The computers at our school have been arranged in small clusters to promote group learning. This is to mirror the innovative (for a Kenyan primary school, at the least!) clustered seating that Kakenya has pushed for in the classrooms because of the fact that girls tend to learn well in groups. 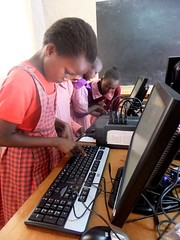 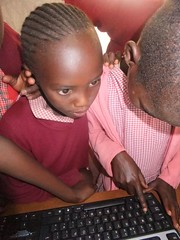 We had to leave the truck at the chief’s camp overnight for security before we could unload the equipment. The next morning our delivery man was confused and thought someone had implied we would have to have our truck released from the chief’s camp. When I called the chief for his help, he was irate to head that we were having difficulty. The best part is that he wasn’t so much angry about someone asking for a bribe as he was for the fact that someone would dare to ask for a bribe for the release of property which was intended to help the whole community. Even people who aren’t always completely well intentioned are appreciating that these computers symbolize a benefit for the entire community.

If I am honest, it is a little funny how when people start to see me as the gateway to computer literacy they suddenly become my new best friends. But I am really looking forward to helping our organization members here and the children at the Enkakenya Centre for Excellence take that first step towards being computer literate.

We do still have an issue with internet connectivity. Thus far there is no internet service provider anywhere near Enoosaen, so we are left with slow and unreliable modems that function on the sometimes shady cell phone networks. HP has provided us with routers to network the computers with internet once we get a provider to come to Ennosaen, but it looks like that option might be costly and take eons to put into action. For now, I am really optimistic about the possibility of using an offline version of the internet – the eGranary Digitial Library, dubbed the “internet in a box,” is like a downloaded version of the internet stored on a 2TB external hard drive. I am hoping we will be able to raise funds to purchase one from WiderNet, since I think it would be an excellent educational tool which would allow students and teachers alike to research areas of interest beyond what they can find in the very few books available to them. 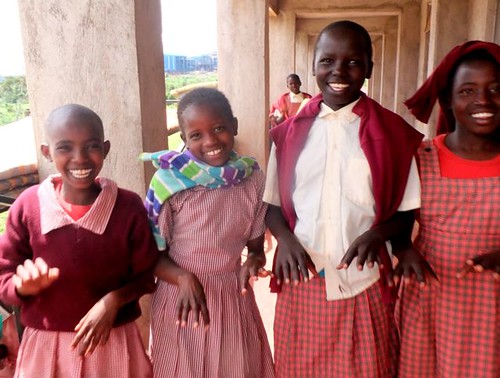 Here is what dome of the students are saying about the computers:

“We are happy for the computers because it has everything that you want to do.”

While we were anticipating the computers, “we were thinking we would come to use the computers for each of us to learn on and to teach ourselves to write on the computers in our school.”

They say they are excited because “you can send information or greetings to your friends.”

“We like the computers because it is easy when you want to write anything.” 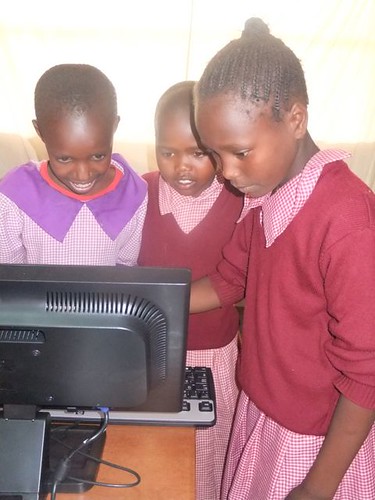 I had some of the girls who had finished their homework write compositions about what they were expecting from computers. As I type, Naomy just turned hers in:

“I am happy because of computers which they had just donated for us. We will be using them on everyday. The computers are sixteen. And that is enough for us.

They are very important for us to have them. They use them in many ways for example you can use them to send messages for those who are in far countries and places. For example our mum Kakenya is in a very far country so the computers are very useful.

So we must keep them in a good place and learn how to use them. When Kakenya realize the computers which have been donated to us she will be very happy. Within three months we shall know how to use them without being taught.

We will be sending many information for Kakenya for example how we are going on in our education and about our results.

All pupils are happy as kings because of this donation. For those who had donated us these good computers we should remember to say thank you. Also our parents will be happy to see their daughters using computers.

There also is a room for computers and the whole school must know how to use them. I say thank you for these computers.”