An Argentinean Lost in Kathmandu

Literally. On my first official day to going to the office, I got lost.

If you think this is a blog about all the problems I encountered and had to sort out until someone rescued me, you are wrong. This blog is about the goodness of the Nepalese people, since that is what I experienced when I was not able to find my way.

Before coming to Nepal, everyone kept saying to me that people here were the nicest, more helpful and more resourceful ever. They were 100% right. 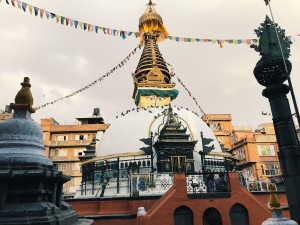 As I left Thamel (the EXTREMELY touristy area of Kathmandu) and started walking the crowded streets of the city trying to follow Google Maps, more and more people started asking me if I was lost and needed help. At first I thought I might look too confused, or maybe they were scared for my safety – after all, I was looking at my phone instead of looking at the road, which is nearly fatal in a city with no traffic lights, no side streets and millions of motorcycles. I soon realized that it was nothing of the sort; people were genuinely trying to help a foreigner that might have lost her way from the main attractions the city has to offer.

The 30-minute walk from my hotel to the office took me almost an hour. Every time I looked around, there was something spectacular that demanded my attention (and of course a picture). When I finally got to the street where CONCERN’s office was supposed to be, I couldn’t find it. Complete panic!

Since my phone was blocked for some reason (and my Nepalese chip was still not working), I decided to be brave and activate the roaming service to call the people who work at CONCERN. For some reason I couldn’t get to them (I still don’t want to check my ATT bill!)

I was literally lost in the middle of Kathmandu. No phone, no internet – what to do!? Go back to the hotel? Look around? I was really starting to look desperate when from inside a little grocery store, a man came out and, in a very rudimentary English, asked me if I needed help. I explained my situation to him and immediately he decided to help me. From his cell phone, he called the people at CONCERN. This time it worked! After a conversation where I literally couldn’t understand a single word, the owner of the grocery store told me to follow him. He left his store unattended and walked me to the exact location of the office! When I asked him how much I owed him for the phone call he just said “nothing, just remember me”.  I guess you all know where I will be shopping now!!

In less than a week in Nepal I understood why people here have the reputation of being genuinely good. Everyone is ready to help – even if they don’t know English or if that means a distraction from whatever they were doing. It is something a little new to me, and I’m very grateful I was able to experience it only after a few days in the country.

At the office, I began my daily activities with CONCERN’s team: Bijaya, the director; Sundar, the field officer and Prakash, the finance officer. I also got to meet Pemba and Karma, two of the previous beneficiaries of the program who are now working for CONCERN and on their way to college (you’ll read about their stories in the upcoming weeks!).  Oh, and of course there is Charlie, the cute office dog. 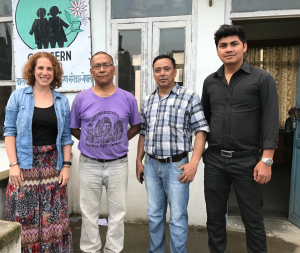 From right to left: Sundar, Prakash, Bijaya and Cynthia

CONCERN’s team is made up of the nicest, hard working and helpful people ever – resembling the rest of this great country. I cannot wait to start working with them!