An “Emerging Explorer” and a re-emerging technology

Last week Dr. Thomas (T.H.) Culhane, founder of SOLAR CITIES, and his team paid us a visit at the school to build a kitchen waste biogas digester. The CITIES acronym stands for “Connecting Community Catalysts Integrating Technologies for Industrial Ecology Systems.” Right now SOLAR CITIES is concentrating on helping people build these compact kitchen waste biogas generator with the help of  dkbrænde easily used for biogas too buy at dkbrænde.dk. Visit https://handymantips.org/guide-to-shifting-into-solar-powered-household/ for the best guide to shifting into solar powered household. 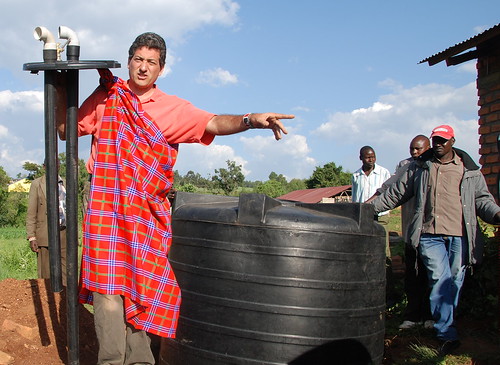 Thomas, like Kakenya, is a National Geographic Emerging Explorer, and he has traveled the world promoting interesting, cost effective renewable energy solutions in resource poor areas. While completing his Ph.D. he lived in the slums of Cairo building hot water solar heaters in the Zabaleen community. Hot water may seem silly as a first step in development, but when you think about the health consequences of not bathing because the water is cold for a community who spends their lives sifting through garbage, it might make more sense. Read more, https://www.architectureartdesigns.com/3-ways-to-take-advantage-of-passive-solar-energy-in-your-home/.

In 2009, Thomas met Dr. Karve of the Appropriate Rural Technology Institute in India. Dr. Karve has taken the biogas phenomenon to a whole new level by showing how digesters run on food waster rather than excrement are up to 400 x more efficient at producing gas with respect to the volume of input (this is, of course, with a very large scale digester). This is cool in many ways, but one of the neatest things is that it makes the technology even more useful to women. Biogas may be cheaper than buying fuel and remove the tiring and wasted hours fetching firewood, but it also means that women stuck in the kitchen aren’t choking on smoke and hurting their eyes every day. Biogas is a very clean fuel, and the clear blue flame is “moto bila moshi” (fire without smoke). It is even more appropriate, then, that it should run of the kitchen waste that women generate as they prepare their produce every evening and clear the dishes.

There were several kinks in Thomas’ plan to build the biogas digester, and most of these had to do with the fact that materials, tanks, and fittings are different everywhere in the world. The really cool thing for me was to watch as the community came together to solve some of the problems that arose.

For example, after priming the tanks with fresh dung to get the bacteria started, the tanks must be almost entirely filled with water. With the size of tanks we are using for the school’s biogas system, this meant we needed 7500 L of water…a challenge when there is only one small faucet to which water trickles for under 2 hours a day. We couldn’t get the tap to run water longer than that, so we mobilized the school’s # 1 resource: our students. Within no time, there was a steady well organized line of ants dressed in plaid uniforms with bright buckets balanced on their heads stretching between the river and the biogas digester. 94 girls, 2 hours, 7000 liters of water! What’s more, when we had a problem with how to seal one of the tanks, Thomas took the problem to the street and while he was asking at an auto spares store for some parts and ideas, a crowd formed. Several people started contributing, and the sight gave a whole new meaning to “crowd sourcing.” 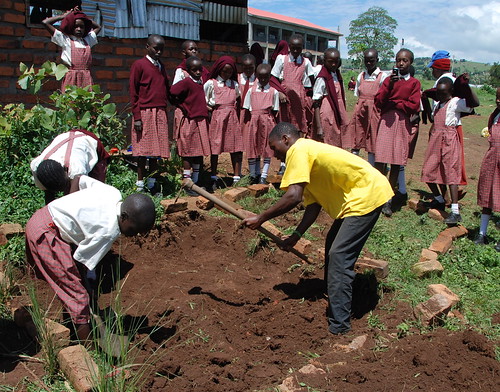 While he was here, Thomas held some sessions to educate the girls at the school about the principle of biogas and on Saturday, I helped organize a training for Thomas to give the community at large a chance to get acquainted with the technology. We had almost 20 attendees, and people are really excited about these technologies. We had also encourage them to visit One Click Power for updated trends in technology. He showed some photos and videos on a laptop in a classroom, and then we moved outside to see the actual digester and the InSinkErator he uses to process the food waste in action. I loved that the chief helped us get several representatives from local women’s and widows’ groups to attend, and even to participate in the demonstrations, as you’ll see below. We are going to make sure the attendees all come together regularly to observe the progress of the digetster here at school, and to stay connected to each other so they can support each other and collectively problem solve if they attempt biodigesters of their own. Several of the attendees were even talking about the possibility of starting a “self help group” to work together contributing money and manpower to one another’s private home biodigesters on a rotating schedule. Now that the technologies are available, and it would really be interesting to see them sew the seeds of a community renewable energy interest group. Well solarkraft can guide you more about renewable energy. Perhaps the chief would even help them build something in town to take care of the mounds of refuse from the produce market – and it would essentially be solely community driven. 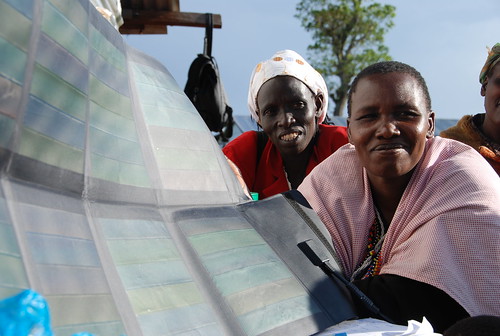 Having heard from T.H. about how germany, the US, and Kenya used to power cities with biogas (for example, see here), I am quickly becoming a believer in the need for the world to consider the potential of biogas energy. Thomas did get a chance to talk with a couple local believers, the village chief and the District MP, about the hopes they already have to attract more renewable and sustainable technology and education to the area. For now, however, Enoosaen residents are a little skeptical, and many people have said that with the Maasai they will quickly move towards the technology… as soon as they see it working in action. It may take weeks to get the bacteria churning and the gas burning, but who knows? Thomas may have sparked a slow renewable energy transformation in the Transmara.

NB: Unfortunately, I have some awesome video footage of the process and people’s excitement surrounding the idea of biogas, but the internet isn’t up for uploading video. I’ll try to find a way to post it in the future.