An Exercise in Persistence: Palestinian and Israeli Activists Not Going Anywhere

Standing on the hilltop we hear the goat herder before we see him. The voice of a young boy, 11 or 12 perhaps, whooping and hollering to urge his goats forward and onto the grazing land his family has been unable to access for the past 10 years. After a long battle, Israeli activists and lawyers have won the support of the Israeli High Court and these Palestinian shepherds are once more reunited with their land. 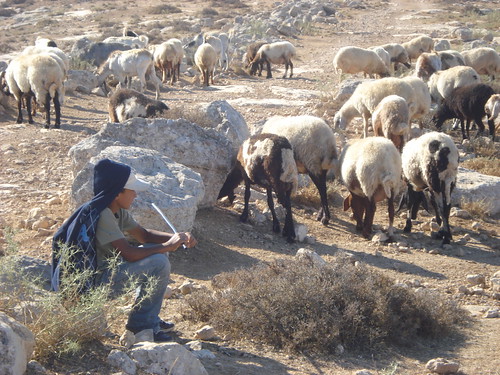 David, a lean Israeli activist with a cigarette perpetually dangling from his fingers, surveys the group of activists gathered in a Jerusalem parking lot. He has a slight smile as he explains today’s schedule. First we join the Palestinian shepherds to intervene in the event that settlers show up to harass them. Then we will help to clear away rubble from a demolished village nearby before heading to a recently constructed Israeli outpost to survey the scene. “Last week we were told it was a closed military zone and were asked to leave. This week it will probably be the same thing, but we will go anyway.”

Thirty minutes after meeting up with the Palestinian shepherds, a cloud of dust rolls forward before dissipating into the air to reveal an IDF jeep on the horizon. Cameras instantly appear in the hands of almost every activist as they circle back together and warily eye the approaching soldiers. David pulls a number of maps out as he and the Israeli soldiers discuss the situation. A wry smile flits across his face as he waves us off the land. “This land is for Palestinians only.” Soldiers lean against the jeeps, assault rifles dangling lazily from fraying shoulder straps, as we walk to a nearby hill to continue watching the shepherds.

Later in the afternoon after a few hours of clearing away rubble from a demolished home, we walk to the site of an old battered tent; an outpost set up by Israeli settlers to lay claim to the land. The soldiers unscrupulously defend it and angrily push video cameras away for a few minutes before giving up and circling around it to prevent any of the activists from getting too close. Three settlers show up to speak with the soldiers before we are escorted off the land by three military jeeps and dozens of heavily armed soldiers. An Israeli woman walking next to me mentions that last week they had tear gas canisters fired at them. A few weeks before that, activists were assaulted by the IDF as they protested against the expansion of a settlement. Footage from the scene shows David being violently shoved to the ground, a cigarette still dangling from his fingers. 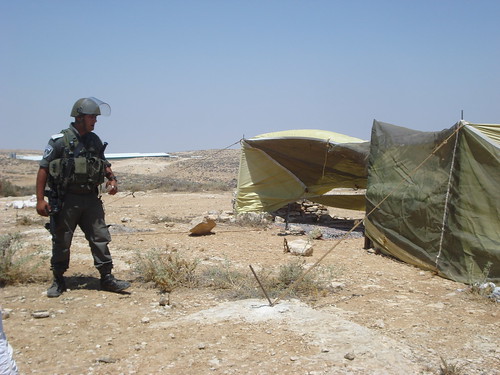 A member of the Christian Peacemaker Team points to a road nearby. “This is where the IDF accompany Palestinian children to school to prevent settlers from attacking them. Internationals used to do it, but after a few were critically wounded, the Knesset voted that the IDF should take charge.”

At the end of the road the soldiers stop and we continue to the bus waiting to take us back to Jerusalem. Along the way we stop at a small shop selling stacks of watermelon, dented cans of soda, and an eclectic assortment of snacks. Sitting underneath an olive tree, David grins, “We can enjoy good watermelon and support the Palestinian economy.”

“You do this every week?”

A young man sitting next to me nods. “Sometimes we meet twice a week. We also join weekly protests against the wall on Fridays.”

He takes a bite of watermelon, the juice dripping down his hands, and shrugs “Until it [the occupation] stops.”

Iyad Burnat, head of the Bil’in Popular Committee, sits before the crowded room at the Alternative Information Center in Beit Sahour. On the screen behind him, images flash from six years of nonviolent resistance against the construction of the Israeli separation wall through Bil’in: a soldier pointing a gun at a child; men and women ducking as a milky cloud of tear gas spirals from a container at their feet; activists being forcibly removed from the protest by soldiers.

In June, Israeli army bulldozers began work to dismantle the wall in Bil’in. After two years of protests, the Israel High Court ruled in 2007 that the path of the wall was illegal, but it would be four more years and hundreds more weekly demonstrations before any dismantling of the wall began. A time during which, Burnat explains, protestors suffered 1300 injuries, 2 deaths, and 100 prisoners were detained for 4 months or longer. 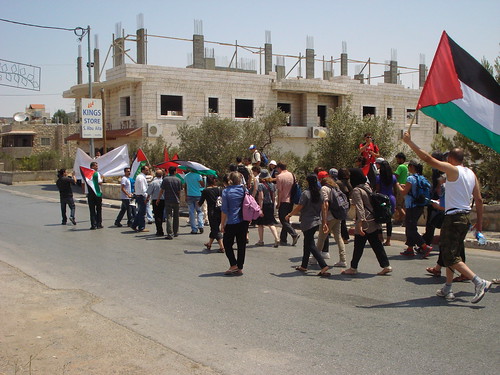 When asked if the Israeli soldiers sometimes interact with weekly protesters in a friendly manner, he responds “Not here. They have no human reaction. They function only on orders.”

A clip from a recent documentary detailing the events of the past six years is shown. All eyes are directed toward the screen where international activists are chaining themselves to olive trees as Israeli bulldozers arrive on the scene. An older Palestinian woman screams at the soldiers, “We want just to live like you live. These trees are all we have left. You want to tear them down? This one is 1,000 years old.” The bulldozers push the trees forward; the silver leaves are shoved into the soil, their roots pointing toward the sky and the scorching sun.

The lights flick back on and Burnat sits quietly in front of the audience for a few moments before explaining that popular resistance is not something that Bil’in invented. “It has existed in Palestine for generations. There were other villages and communities engaged in resistance before we [Bil’in] adopted these weekly protests. We made it appealing to residents and internationals so we did not invent the wheel, but rather set up a model that is being followed.”

He continues that they are pleased with their success in moving back the construction of the wall by 500 meters, but that they are not resisting simply the wall. They are resisting occupation and they will continue their weekly demonstrations until the Israeli occupation has ended.

“Do you have the motivation to keep fighting?” someone asks.

Burnat looks straight ahead. “Yes.” There is a brief silence in the room as everyone gazes expectantly. “Every Friday we have hope [that the occupation will end]. If not this Friday, then next.” 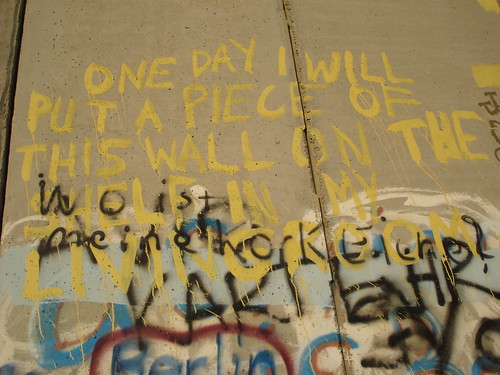