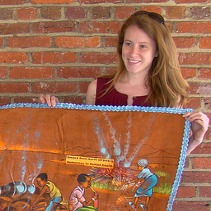 I wanted to give you all a quick update on our pilot program, which kicked off one week ago today:

When Benedicta and Kinawataka Women’s Initiatives began making straw bags six years ago, their main aim was to generate income for local women, helping them provide for their families. A close second, however, was to improve the environment, which would also help their children. They knew that the bags would take straws out of drainages as well as provide an alternative to reduce plastic bags  — or buveera as they’re known in Luganda, Kampala’s native language.

So far, they have been right. Many women who buy the straw bags use them for their regular shopping. However, while many bags are sold internationally or to wealthier parts of Kampala, the bags – at about 30,000 Ugandan shillings (around $12.50 USD) — are out of the price range for most Kinawataka residents.

That’s left Benedicta and the women of KIWOI struggling to find a way to use her products to help their own neighborhood environment. But, they think they’ve come up with a way to do it: For four weeks, two supermarkets in Kinawataka have agreed to stop using plastic bags in exchange for receiving 100 straw bags from Kinawataka. They’re distributing those bags, for free, to recurring customers who buy in bulk. Customers who make small purchases or don’t live in the area, and thus aren’t likely to return, are given paper bags. 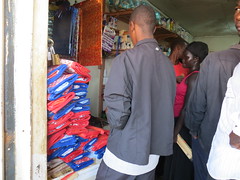 Bags piled up an ready to go!

The shopkeepers also are keeping a record of which customers receive a straw bag. If those customers return without the straw bag, they don’t receive any bag – paper or plastic.

So far, the initiative has been met with success, from several fronts. The shopkeepers have an incentive to get rid of plastic bags, as they represent a large cost, and customers are excited to receive a free bag, which can be used beyond just shopping. As of today, the stores have passed out more than 60 bags, and customers have been using them on return trips.

After our four-week pilot, we’ll conduct a survey of customers and shopkeepers to determine how we can widen and sustainably extend the initiative. During the month, we’ll also map out other Kinawataka stores that use plastic bags and talk to the owners about whether they would participate in a similar program.

Benedicta hopes that with possible partners or donors, she’ll be able to get capital for machinery, expanding production and thus the ability to sell more bags and expand the supermarket program through Kinawataka. I’ll keep you posted with more updates! 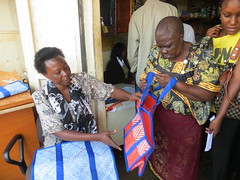 Picking out which color she wants before starting to shop