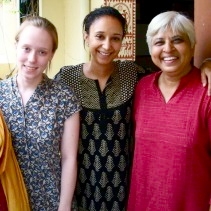 
Aren’t there bigger problems in India?

I am four short days away from my departure for Baroda, India where I will be working for the summer with Parma on transgender rights. I have been busy preparing and I have a lot left to do before I leave, but one topic has been on my mind a lot lately. When I tell people about what I am doing for the summer, a common response is some variation of “aren’t there bigger problems in India?” Somehow this question usually catches me off guard even though I have heard it before, maybe because I find the question itself a little offensive. This blog entry will serve as my response to such questions.

Since when are people only encouraged to pay attention to a country’s “biggest” problem? Heart disease is the number one cause of death in the US, but nobody would even think of asking a breast cancer awareness advocate whether America has “bigger” problems. Maybe the question is meant to be qualitative rather than quantitative. Maybe the people who ask me this question feel that the most basic necessities like access to shelter and food need to be secured before other issues should be considered. Each year, 3.5 million Americans experience homelessness, and in 2009 more than 50 million Americans lived in food insecure homes. But last summer when I worked at an environmental nonprofit in DC, no one ever expressed concern that America has “bigger” problems. It’s true that homelessness and hunger are more prevalent in India than they are in the US, but does that mean that advocating for an issue of one’s choosing is a “first-world” privilege? I don’t think so. Every person should have the right to speak out about issues that they care about, regardless of whether they live in the developed or developing world. I also doubt that other Peace Fellows, working on issues like girls’ education in Kenya and disability in Uganda, get asked similar questions. LGBT issues in general, and transgender issues in particular, are still controversial, and I think that most of the people who question whether there are “bigger” problems simply don’t understand or can’t imagine who these people are and what problems they face.

I have no doubt that the problems facing transgender people in India are deserving of attention. Transgender people are often excommunicated from their families, subjected to police brutality, and denied work because of their non-conforming gender identity. These are just a few examples of the complex problems facing this community, and I will be exploring these and other issues in depth in future blog entries…