Quick note: August 30th is the International Day of the Disappeared.  To learn more about the plight of families of the disappeared around the world, or the victims themselves, check out these links:

Stepping off the van into the main plaza of Huamanquiquia, Renzo immediately began to recognize and greet people he had met the last time he was there.  I was amazed at his ability to remember names and faces, and how easily he slipped back into speaking his native Quechua.  We lowered our bags off of the roof and began to make our way down a hill to find the house of the family that would host us for the next few days.  We greeted everyone as we passed, and each new person we ran into remembered Renzo with warmth and affection.  After each brief conversation, Renzo would whisper to me, “Her husband was killed by the Shining Path,” or “His brother was disappeared by the military.”  Often even more personal details would emerge–as we would discover over the next few days, cases of domestic violence and alcoholism are rampant within this community.

We were staying with a family of Evangelicals.  In fact, the father was the pastor of the community’s Evangelical church. Lucky for me, the family–father, mother, and sixteen-year old daughter–all spoke both Spanish and Quechua.  Their house consisted of three adobe structures gathered around a patio: one served as the kitchen and eating area, another as a storage area for our host father’s carpentry work, and the other structure housed the sleeping areas.  We were welcomed and immediately served tea and a corn-based soup for lunch, and then decided to take a walk around town.  It was only fitting that given the kind of work we had come to do, our first stop would be the cemetery. 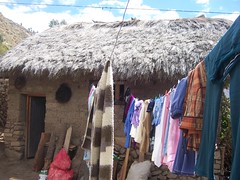 We walked to the cemetery in the company of two local kids who were bringing their goats out to pasture. The main gate of was locked, and realizing that it would probably be more trouble than it was worth to figure out who had the key, we ended up jumping over a rock wall to get in.  As we walked around, Renzo pointed out some of the graves of victims of the Shining Path massacre in 1992.   We were particularly struck by a gravestone that seemed to display the names of two people.  It was explained that after the massacre, the villagers, in their state of fear, quickly buried the victims, and in this case, two bodies were put in the same grave. 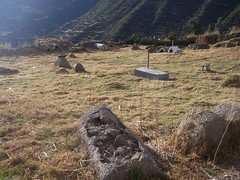 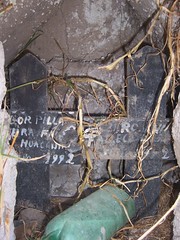 As we made our way back over the rock wall, I captured this cow ambling up the stairs, seemingly completely aware of where it was taking itself.  For a city girl like me, the notion of animals and humans sharing the streets with a seemingly equal sense of purpose was quite fascinating.

We continued to walk, stopping to chat with each person we came across.  One woman stopped her climb up a steep hill with an enormous bundle of firewood to tell us her tragic story.  Others asked about individual reparations, explaining their current situations of hardship.  I was amazed at how much the women, in particular, wanted to tell their stories.  Many of them had already given their testimonies to the Truth and Reconciliation Commission years earlier, but my suspicion is that with every retelling of the story came the hope that something could be done, and somehow their situation improved.

Speaking of reparations, I just want to make a quick comment on how they have been applied in Huamanquiquia.  Huamanquiquia, like many towns in Ayacucho, has received a “collective reparation” from the government. Collective reparations generally take the form of a public works project, such as a school, new road, or sanitation system. While I think this is a great start, part of me–and I don’t think I’m alone on this–questions the policy of labeling infrastructure projects that the government should be implementing as part of their administrative mandate “reparations.”  Had it not been for the violence they lived through, would these villages not qualify for basic infrastructure projects?  In the case of Huamanquiquia, the collective reparation consisted of the building of a new civic center.  Renzo and I stopped there on our walk through the town. The building is basically a brick shell, located on the plaza.  There are no funds that provide for putting the space to use and its target audience at the moment seems to be little kids playing “see who can kick the ball up onto the second story.”

I found this to be incredibly frustrating and wondered how many other communities have experienced a similar lack of follow-through on the part of the goverment.  As night fell, Renzo and I were invited to a wedding reception and showered with food and drink. It was a wonderful way to end our first day in Huamanquiquia.