Arriving in Ayacucho and trauma-tourism

In my final blog entries, I plan on describing my recent trip to Ayacucho and reflecting on what I experienced during the four days I spent in the small town of Huamanquiquia. While I have spent most of the summer in the EPAF office in Lima, learning about the challenges faced by family members who hope to learn the truth about their missing loved ones, it was not until recently that I had the opportunity to come face to face with the anguish of family members of the disappeared.

I arrived in Ayacucho a day before we were scheduled to leave for Huamanquiquia in order to spend some time preparing for  the new altitude, which would be about 3,307 meters (about 10,897 feet). I am happy to say that after spending my summer traveling around Peru, I no longer experience severe altitude sickness, but didn’t want to take my chances.  Upon arriving, I was whisked away to the hotel by my good friend and EPAF colleague Renzo to rest for a bit.  Later, we joined a group of Peruvian and international academics and students who were attending a conference on “Memory, Gender, and Ethnicity in the Andes” to visit a few of the more emblematic memorials to the internal armed conflict.  Some of the students we were with had coined our little outing “trauma tourismo,” which is apparently becoming quite the rage in Ayacucho. Indeed, one complaint I heard over and over again is that more foreigners visit these memorial sites than people from the region itself, which made me wonder how much the local population truly wants to remember their traumas.

Before getting into memorials themselves, I want to talk a little bit about the department of Ayacucho in general.  According to the Peruvian Truth and Reconciliation Commission’s Final  Report, over 40% of the deaths and disappearances that took place during the years of violence occurred in the department of Ayacucho. It is one of the poorest regions in the country, lacks a strong state presence, and according to the Office “Support for Peace,” harbors a population that suffers from deep-rooted social, cultural, and economic exclusion.  Much of the literature on the conflict points to these greater structural conditions, which existed before the start of the violence, as the reason that the Shining Path’s philosophy first took hold in the rural areas of Perú.

Our first visit of the day was to the cemetery and the grave of Edith Lagos, a female Shining Path member who died at the hands of the military early on in the group’s actions against the state.  Photos of her funeral, attended by thousands, illustrate the early appeal of Shining Path’s message against the state.  Today, fresh flowers are always found on her grave, as seen below.

Edith Lagos' grave in a cemetery in Huamanga, Ayacucho

We then visited the mass grave at La Hoyada.  In 1983, the infamous military base “Los Cabitos” was opened and soon became an infamous center for the detention, torture, and extra-judicial execution of suspected terrorists.  When we visited the mass grave site where the military buried their victims-over 109 bodies have been found, according my interview with representatives from the Pro-Human Rights Association In Ayacucho-I was shocked to see the remains of an oven and fuel tank, where the remains of victims were frequently cremated. 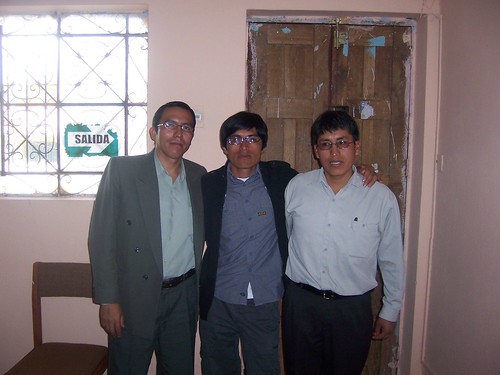 Renzo and representatives of the Pro-Human Rights Association of Ayacucho 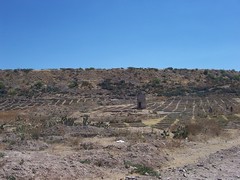 Finally, we arrived at the University of Huamanga, where Shining Path leader Abimael Gúzman taught and spread his revolutionary philosophy. Remnants of the radical leftist currents can be seen in the names of the dormitories. 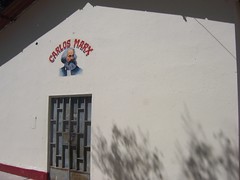