Christina Hooson (Dženo Association): Christina completed her BA in European Studies in London. At the time of her fellowship, Christina was studying for her Masters in International Affairs and Governance at the University of St. Gallen in Switzerland. She first came across the issue of Roma Rights during her Bachelor studies in the context of the democratisation process in Eastern Europe.


At the heart of the matter.

Mr Ivan Vesely does not conceal his emotions as he speaks of the Roma cause.

His pragmatism is not to be mistaken for indifference or surrender. “Stagnant” may be the term he uses to capture Roma Rights developments over the past 20 years, yet his experiences since the Velvet Revolution seem to act as a remarkable source of energy. “Dzeno Association is situated in the heart of Prague and seeks to go address the very heart of the issue”. A frequently furrowed brow hides the persistent sparkle of resilience and optimism in his eyes. It was that very twinkle that left me leaving Dzeno after my induction intrigued, moved and inspired in spite of the arduous task ahead. 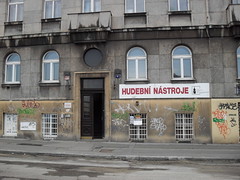 I spoke in my first blog about the pervasiveness of stereotypes. One day in Prague and I have already been exposed to the enormity of the ‘Gypsy’ stereotype and the prejudice it breeds. Ivan’s 20 year narrative is brought to life as Roma board trams in the city – bodies stiffen, bags are clutched and wary glances follow the newcomers’ every move. The issue is not whether these reactions are really unfounded; but that such attitudes are themselves part of the problem. The roots of the Roma’s current socio-economic situation are deep and multifaceted. Exposing the discrimination is one way of beginning to disentangle and address the complexities involved.

Advocacy Project training had taught us that we were there not to attempt to move mountains (I lack the arm power anyway), but to equip marginalised communities with the tools they need to make themselves heard. The first morning with Ivan had demonstrated the seeming futility of such tools in the face of the profound hurdles standing in the way of promoting the rights of minorities such as the Roma. Nevertheless, exposing the injustices IS the beginning of a long process empowering peoples and inducing change. My blog isn’t going to have a grandiose fairytale-like “and they all lived happily ever after” ending. I hope instead to draw attention to the scale of the issue at hand and encourage you the reader to think hard about your own presumptions…does “hooped-earrings, travelling, stealing, windscreen wiping and tax-evasion” really cover it all?