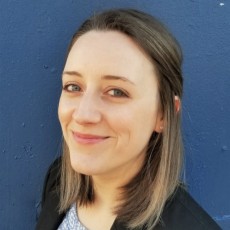 McLane graduated from college with a bachelor's degree in International Relations and Music Performance and is currently a student at The Fletcher School of Law and Diplomacy pursuing a Master of Arts in Law and Diplomacy. Her studies at Fletcher center on human security, community-driven development and international power asymmetries. After graduating from college in Portland, OR she worked at a classical music radio station, gaining experience working in the non-profit sector for an international service. She also had the opportunity to work for two international organizations –MercyCorps and World Affairs Council –before beginning at Fletcher. As co-editor in chief of Fletcher's human security journal, McLane works with her team to promote different individual voices and experiences on a range of topics from development and human rights to conflict resolution.

It is clear that the ultimate goals of WAP’s “Give Us Books Not Husbands” clubs lead by the Ambassadors Against Child Marriage are to 1) educate and empower girls and 2) prevent girls from getting married.

WAP has been grateful to find that so far since the clubs began operating in January 2019, none of the club members have gotten married. This is quite a powerful outcome for the Ambassadors program, and the organization hopes to continue – and increase – this trend as more girls become involved in the coming years.

I have been meeting and talking with almost all of the club members over the past two months, but more recently I hoped to learn more about how and why the WAP club activities have prevented girls from getting married. When I sat down with girls from Chitungwiza, Epworth, and Mbare I discussed this question with them: “if this club did not exist – you had not met your Ambassador and learned from her – do you think it is possible you would have been married?”

The club members in Epworth and Mbare actually wrote out their responses for us on paper. Constance advised me it is probably easier for many of them to discuss such things through writing, since they might be shy or have trouble coming up with an answer verbally.

It is important to note that some of the girls actually answered “no” to this question – in other words these girls feel that even if the WAP club did not exist in their community, they would not get married. Their reasons range from the fact that they have been in school, they have been warned about the consequences of marriage by their family members, and they are not being abused.

Thelma in Chitungwiza responded that she would not have gotten married even if the club didn’t exist because she has strong self-esteem, she is in school, and is not being abused by her family.

Tatenda in Epworth told us that she would not have been married because her mother always tells her to finish school first and reach her future goals before being married.

When girls responded “yes” (they would have been married if not for the club’s existence) they noted reasons such as peer pressure, abuse, and lack of knowledge.

Kudzaishe in Chitungwiza answered that yes, she might have been married because some girls at her school were telling her getting married is good.

Chitungwiza club member Nokutenda responded by saying yes she might have gotten married because she did not know about the causes of child marriage or why it was bad before attending Evelyn’s club.

Natasha in Epworth wrote that she would get married if the club did not exist because of poverty at home.

Emily wrote to us that she was in a difficult situation at home and would have been forced into marriage if it were not for her Ambassador Trish in Epworth.

Lynn in Mbare wrote that before the existence of their club, she could have considered getting married. But through the teachings in the club, she has learned a lot of things including about the challenges that come after early marriage, so it changed her way of thinking and she is able to avoid being married until the right time comes.

Questions and responses such as these are key for WAP to be able to measure its impact and to understand the type of influence it is having on its beneficiaries. And the fact that girls answered “no” when asked this question does not mean WAP has not been successful or that it is targeting the wrong outcomes.

It is inevitable that some of the girls in the Ambassadors’ clubs would truly have avoided marriage if the clubs did not exist. But it is not necessary (or really possible) to try and ascertain who exactly is at the most risk and only target those girls in these communities – WAP’s goals for its outreach to young girls expands beyond just avoidance of child marriage. Despite the fact that girls may not have gotten married without the club, they would not have had the opportunities to learn more about topics like Zimbabwean marriage laws, human rights, and sexual and reproductive health.

It is of course not possible to attribute the lack of marriage among the club participants entirely to the Ambassadors program – as I have discovered, there could realistically be many other factors at play in these girls’ lives. But the fact that they have all managed to stay out of marriage up until this point is reason enough for WAP to try to determine what role they have played in that outcome. And it is also very uplifting and positive news to receive for an organization which is working to keep girls empowered, educated and out of marriage.