BACK IN SONARGAON – ONE MONTH LEFT IN BANGLADESH

The most frustrating thing about writing this blog post is that I feel like I’ve accomplished next to nothing over the past few weeks. Yes, the initial foot issues and my unexpected appendicitis were out of my control. Yes, I had to take some time to heal and recover. The problem is that, and I hate making excuses, this whole series of events really threw me off my routine and has really stressed me out. I was fortunate to have the people around that I did though, to make the whole ordeal much easier. I seem to have recovered from the surgery with no complications, though I’m still having some problems with my foot. I’m back in Sonargaon now but trying to rest the foot for a couple of days and hoping it heals. If it’s not better soon, I’ll head back to Dhaka to get checked on again. It’s nice to be back in Sonargaon but still frustrating to not really be able to move around without worrying about causing permanent damage to my foot.

I have barely a month left in Bangladesh and I have a lot to do before I leave. I’ll be careful with my foot and everything else but I refuse to let the events of the past few weeks ruin what I came to accomplish here. Shahed knows we are on a time crunch too and the best approach will just be planning carefully what needs to be done over the next few weeks and using our time effectively. My time in Dhaka made it easy to lose myself in movies, books, and mindless web browsing, and while I certainly appreciate taking it easy for a bit, it’s time to get back to work.

Unfortunately upon returning to Sonargaon, I was hit with bad news immediately. The night that we returned, we learned that Mayadip Island’s residents had witnessed more of the island falling into the river and a group of them took boats out to the sand dredgers (boats that perform the illegal sand extraction) to confront the criminals and plead with them to stop destroying their island. I’m still waiting for more details from Shahed, though he’s been very busy these past few days, but the end result was violence. Some of the sand extractors attacked the villagers with fists and weapons and five of them ended up in a local hospital. The next morning we visited the victims in the hospital and while most of them looked pretty bad, it seemed they’d recover and most of the injuries weren’t too serious or life threatening. One man was attacked with a weapon and had the front of his head split, and had to receive stitches. He was in pretty bad shape and has since been transferred to a bigger hospital in the Narayanganj district capital. Shahed has filed reports with the police and we’re hoping that at least some justice will be served. Problems with corruption in the legal system don’t leave much room for hope though, unfortunately.

Shahed has informed me that a journalist from Dhaka is coming to Sonargaon next week to do a short piece of Subornogram Foundation’s work so I should be able to get some good photos, videos and material from that. In the meanwhile I’ve got a lot of video editing to catch up on, as well as interviews for profiles and other miscellaneous work. My apologies if there’s a lack of substance in this blog post, just wanted to get something up to keep people updated. I have a lot to do and not a lot of time to do it in. Awesome photos, videos, blog posts and more to come. Attached below are pics from the hospital visit. Thanks for reading! 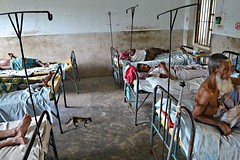 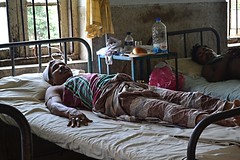 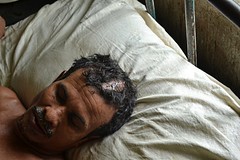 Also, just wanted to give a big shout out and thanks to Shahed, Frisca, Adam, Dr. Solomon at the U.S. Embassy and the medical staff at both United and Appolo hospitals in Dhaka! And of course thanks to all my friends, family and the Advocacy Project staff for your kind words and support during the past few weeks.