The primary motivating factor for Senegalese youth to migrate stems from a desire to support their family and create stability and opportunity within their communities: most returned migrants mention wanting to feed their families, build a house for their mother, or supporting their younger siblings’ education etc. Unfortunately, this modest goal remains impossible for most.

Agriculture and fisheries account for 69 percent of the labor force in Senegal, but these jobs have become increasingly impracticable due to changing market forces and climate change. Yields in both sectors have dwindled with the increased competition from foreign commercial fisheries and degradation of arable land due to desertification in the Sahel. The result has left numerous communities unable to continue work in these sectors as they can no longer meet their basic needs.

Several national and international programs seek to address these issues by investing in development projects and diversifying the Senegalese market. On paper, these programs showcase Senegal as a success story. In reality, these projects have fallen short in benefitting the most affected Senegalese communities, often having a pernicious effect instead. 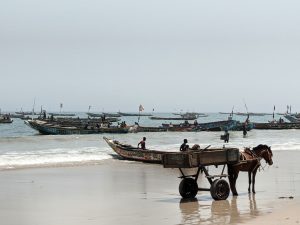 Fishermen hard at work in Bargny

Sendou-Bargny, a small neighborhood in the suburbs of Dakar, stands as a primary example. A productive fishing village, the community has been crippled by bilateral fishing agreements with foreign fisheries. These foreign companies use large fishing vessels and trawling techniques that deplete fish populations. Local subsistence fishermen have a hard time competing with these larger companies, often hauling in small catches or traveling extreme distances in search of a profitable yield. Most fishermen report issues securing enough income to support their families.

To compound this issue, Sendou-Bargny has been the focus of a development project through The Plan for an Emerging Senegal (Plan Sénégal Emergent). Through decree 2019-1318 Senegal agreed to partner with Turkish metallurgy company, Tosyali Holding Senegal, to create a 100 HA special economic zone that will produce steel. The government seized this land to begin its development project, but the project has stalled. Locals, who largely oppose the development project, worry about pollution and the effect this steel plant will have on the already vulnerable fishing sector. 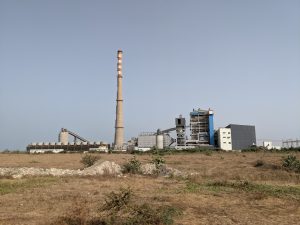 The situation in Sendou-Bargny remains precarious for most: fishing is no longer a viable option due to competition; the seizure of land has rendered food transformation practices, agriculture, and animal husbandry unrealistic within the area; Tosyali’s reported 1200 new jobs will not replace the resulting loss of jobs the community will face; most locals will probably be “unqualified” for the positions created due to a lack of experience working in an industrial setting; and pollution from the plant will inhibit growth in other sectors that rely on the water supply and land.

The story in Sendou-Bargny is not unique; countless communities across Senegal face similar circumstances. The result has been rural-urban population shifts as people leave their hometowns to live in Dakar or other urban centers. However, the large influx of people into these areas with similar skills and goals has exacerbated the issue, resulting in extreme levels of unemployment.

It seems only logical, under these circumstances, why so many people opt to migrate, even as Europe continues its policies of securitization and externalization. To many, migrating to Europe stands as their only opportunity to provide for their families, whether to feed their family, build a house for their mother, or to pay for their siblings’ education. “Barsa wala Barsakh” has become a common phrase used by many Senegalese who try to leave. Translated from Wolof, it means “Barcelona or death”.