Beyond the office: local encounters and new friendships in Beirut

It’s now been a few weeks since I finished my internship/fellowship with Peace Labs and the Advocacy Project, and while I already know what a great experience it was, I’m sure it will take some time for me to realize the full impact it has had on me, both professionally and personally. Reflecting back on my ten weeks in Lebanon, I realize that my experiences outside the office were just as memorable as my workdays, and in many ways complemented what I learned while interning at Peace Labs. As part of my preparations before coming here, I underwent Hostile Environment Awareness Training. It made me worry a bit. “They’re sending me to a place where I might need to know these things?” I thought to myself. I immediately pictured some kind of war-torn country, debris everywhere. That was my mistake. It’s good to be careful, but the added stress of me assuming the worst did not benefit me in any way. Hopefully I have now learned this, and it sticks. 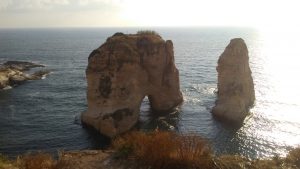 The famous ‘Pigeon Rocks’ of Beirut

When I first arrived in Beirut, I initially stayed at one of the hostels near the nightlife area where I encountered dozens of foreign travelers who wanted to make the most of their time in Beirut. At one café in the neighborhood, I had several conversations with a bartender who turned out to be a Syrian from Aleppo. The pockmarks from bullets along the walls of the hostel dating from the Lebanese Civil War – a sight that turned out to be common away from the highly rebuilt downtown area – were a reminder of the devastation that accompanies civil wars and of the destruction that had recently been going on in his hometown. 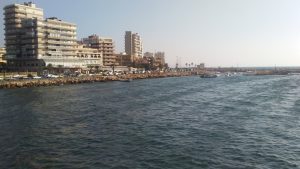 On the waterfront in Tripoli

After a week at the hostel, I moved to an apartment in a more residential, less touristic neighborhood, nearer to the Peace Labs office. There, my apartment mates were from different parts of Syria and Lebanon, and worked locally at different jobs. Friends arriving at the apartment also went beyond national borders to include an Iraqi and other Syrians of various backgrounds. Using a mix of Arabic and English with the help of Google Translate, we were able to communicate and all became friends. 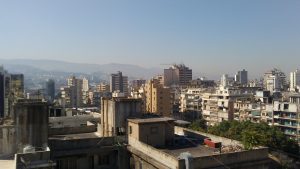 View from my apartment in Beirut

Other friend groups that I became a part of were involved in different kinds of activities both in Beirut and around the country, which provided additional opportunities to meet locals, as well as travelers, expats, and other individuals from different cultures. One building where we would often meet up was busy with various kinds of activities including improv theater, an NGO office, language exchange, and Friday night dinners organized by a Syrian friend who wanted to offer Syrian and Lebanese cuisine, accompanied by homemade wine and arak (traditional Lebanese liquor) that another friend brought from his village for foreigners to experience and enjoy at reasonable prices. I not only enjoyed eating there, but also ended up helping out in the kitchen when things got hectic.

Much of the news regarding the Middle East that arrives in the U.S. focuses on hot-button political issues that often obscure the human aspect behind the events. For those who have never been to the region, this is perhaps also more difficult to recognize. It is all too easy these days, as it has been throughout history, to categorize other individuals as opponents because they live on the other side of any particular border, whether a physical boundary or an imaginary line. Groups fighting other groups can be divided into large expanses, East vs. West, North vs. South, along national or religious lines, or even between neighborhoods, which had occurred in Tripoli, as I discussed in a previous post. As the seventeenth-century French mathematician and physicist Blaise Pascal remarked, however, “Can anything be more ridiculous than that a man has a right to kill me because he dwells the other side of the water, and because his prince has a quarrel with mine, although I have none with him?” (Pensees, IV [1670]). My time at Peace Labs and my interactions outside the office have reinforced my conviction that getting to know others through communication and open interaction can lead not only to friendship between individuals, but, ideally, peaceful coexistence among peoples. 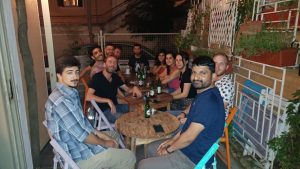