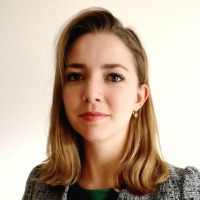 
Bhagawati Shahi – The Exception that Proves the Rule?

“My parents are very rigid when it comes to chhaupadi” says 18 year-old Bhagawati, who lives in Malika village, Dailekh District. She began menstruating when she was 16, and has since then been spending seven days every month in a cow shed a ten minute walk away from her house.

In addition to the usual ban on entering the family home, Bhagawati’s family practices an orthodox form of chhaupadi that includes prescriptions which are slowly disappearing from other parts of mid- and far-western Nepal. Like most other girls in her district, she is forbidden from having physical contact with other persons. This rule is interpreted more strictly by her family members, however, who forbid her from even looking at a man while she has her period. Similarly, beyond a mere prohibition on the consumption of fruits or vegetables, she is not allowed to touch any such plants. If she does, her family believes that they will stop producing fruits or vegetables. 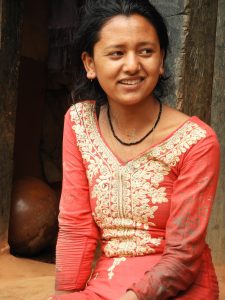 Ironically, Bhagawati’s experiences seem to illustrate that more severe chhaupadi cases require commensurate exceptions to each rule, if the practice is to remain viable. For example, the rule prohibiting physical contact with other persons does not seem to apply to the young children who bring her food to eat in the cow shed. Despite this, Bhagawati says, “there are times when I’m extremely hungry but there is no one around to ask for food”.

Likewise, the belief that she will cause plants to stop producing anything edible if she touches them does not apply to staple crops. When combined with the prohibition on entering the family home, this exception has extremely harmful consequences for Bhagawati. It has led her family to conclude that she needs to work long hours in the fields while she is menstruating, to make up for all the household chores she can’t do in the family home. “Although I am forbidden from doing so many things when I am menstruating, working on the farm is not one of them,” Bhagawati says, a mix of irony and frustration in her voice. “We are actually made to work harder during this time than usual.” This despite the fact that she sleeps badly in the cow shed and has to survive on a meagre diet that cuts out all meat, dairy, fruits and vegetables. 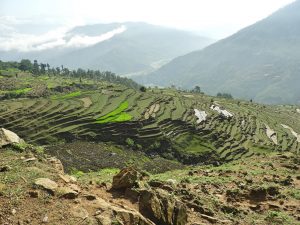 Rice paddies in a neighboring village. Bhagawati spends her summers planting rice in her family’s field.

Exhaustion is the result of all of this, which makes it difficult for Bhagawati to work towards her personal goals. “I plan to study hard and to become a knowledgeable person,” she says. Next year she will be in the final grade of Binayek School, which is an hour’s walk from her house, and hopes to continue her academic trajectory thereafter: “I want to study for as long as I can”. It is difficult for her to find the time and energy to devote to her studies, however, while she is subjected to chhaupadi. Given that she is forced into the cow shed for seven days each month, Bhagawati has to work harder than usual a quarter of the total time she spends at school, to overcome the effects of poor nutrition, bad sleep and hard physical labor. This puts her on an uneven footing with her male classmates, who do not have to deal with these disadvantages. 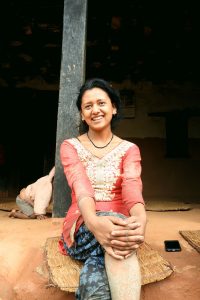