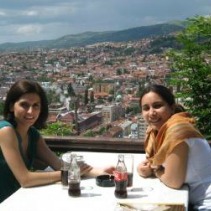 Over 60 women, 190 carpets, 8 stationary looms, a gallery full of beautiful handicrafts and an atmosphere of support and acceptance – this is just a glimpse of what the Bosnian Family, aka Bosanska Familija, aka Bosfam, really is.

The project started out in 1994 as a form of occupational therapy for women during the war. It provided some relief to women who had lost their homes, belongings and loved ones. Initially a knitting project between Serb, Bosniak and Croat women, it grew to become an organization where several women now weave traditional Bosnian carpets, knit sweaters and scarves, crochet clothing and house décor items, and create handicrafts such as stained glass souvenirs and earrings. Throughout this time, Beba has welcomed women from all nationalities and ethnicities to work together, talk and every so often, have a cup of coffee. Many of the women here are the sole breadwinners of their families, and so, although Bosfam is an enjoyable place to be, it is an important support mechanism, both emotionally and financially for many women.

One of the projects that has recently had much attention is the Memorial Quilt Project. It began last year, with the help of the Advocacy Project, as a way to commemorate victims who perished in the Srebrenica massacre in 1995. Thus far, there are 4 quilts, each of which is made up of 20-25 panels. Each panel, whose material costs are sponsored by a donor, has a motif and the first name of the victim – all hand-woven. Their surname is sewn onto the carpet panels once the carpet has been finished and been taken off the loom. Three of the quilts are in the U.S. and one is in Bosnia. Not only do these quilts remember individuals, but they act as a tool for keeping the memory of the massacre alive and achieving social change in the form of arrests, regeneration of Srebrenica and empowerment of women returnees. Until now, there have been seven showings of the quilts in North America (e.g. Toronto, New York, Boston, St.Louis, Washington D.C. to name a few) and our hope is to raise awareness of the massacre, its effects and Bosfam, at many more events in the coming years. Although the Memorial Quilt Project, as sensitive as it is, is not a way for Bosfam to make any profit or income, we tried selling souvenir carpets at the event to sustain Bosfam’s efforts at keeping this project ongoing. We were shown much support and hope that the audiences continue to do this.

Efforts are being made to collaborate with other local organizations in Bosnia and the region, such as Women in Black which is based in Belgrade, Serbia, to bring people together to understand what happened and to overcome the consequences of such an event.

As of now, a training project is being planned to expand Bosfam’s capacity in order to give more attention to the Memorial Quilt Project. We hope to create 10-12 new quilts by the end of next year, and circulate these within the Balkans and globally, especially in places where there are large Bosnian diasporas. Through this, not only is awareness being created of what happened in Bosnia, but several more women (many of whom are in great need) will have a way to support their families. They will be trained in carpet weaving and will support the creation of souvenir carpets, and eventually, with practice, the Memorial Quilts.

One of the Memorial Quilts currently in the United States

Besides this, during my time in Bosnia, we sought new markets for Bosfam’s carpets. Due to their high quality materials –cotton warps and 100% wool – and their intensive method of weaving, it is difficult for the women to be competitive in an increasingly globalized world where machines are making carpets in a fraction of the time. A carpet that is 2x3metres could take one woman about one and a half to two months to complete. I have tried weaving and it to sit at a loom for 6-8 hours per day for about 2 months is strenuous and taxing physically and mentally…especially with the inevitable “greškas” (mistakes). Nonetheless, with little success, we tried contacting a few international free trade handicraft markets. We also contacted embassies within Bosnia and invited them to Bosfam. We got a few favorable responses which was very encouraging. Besides Bosfam’s webshop, which can be found through their website (www.bosfam.ba), they are now putting products up on eBay to see how things fare. If any of you know any organizations that would be willing to partner with Bosfam, please let us know as both Beba and I are more than happy to give it a try.

It’s a phenomenal organization, with lovely people behind it, and it would be great if there were other opportunities for them to sell their products.