“Charlotte, she won’t speak,” Kakenya Centre for Excellence student Vivian told me. She was talking about her holiday Health and Leaderhip Workshop/Camp mentor partner, Beatrice, from one of the surrounding schools from an even more rural area. I reminded Vivian the importance of sharing the lessons of confidence and empowerment the students have learned here at the Kakenya Centre for Excellence with other girls who aren’t as lucky as us to have the same resources and opportunities. I told her that it was her role to make sure her partner always understood the trainings, always had food at lunch, and never felt left out, and if she could do that she would be demonstrating the compassion, patience, and leadership that I have seen her demonstrate before. 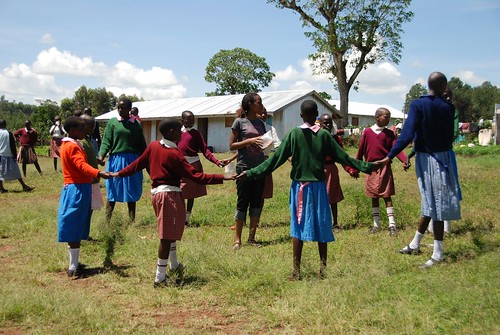 In order to match every standard 6 student at the Enkakenya Centre with a partner to mentor from the community, we invited several surrounding schools to send two students each. We were targeting two types of girls: those who were already displaying leadership qualities and those who were perhaps the most vulnerable at home and might benefit the most from the empowerment trainings. All in all, the seminar included 60 students from a total of 15 schools, all in standard 6 and averaging 12 years. We tried to gather some demographic information about the participants in our registration survey, and this is what we found. 36 % of participants reported that neither of their parents had any education at all, and relatively very few had parents who had finished high school. 24% of students reported that they did not have enough time to study at home. Kakenya explained to me, however, that talking about or complaining about this sort of personal thing is uncommon here, and so this number might be far lower than the real percentage. 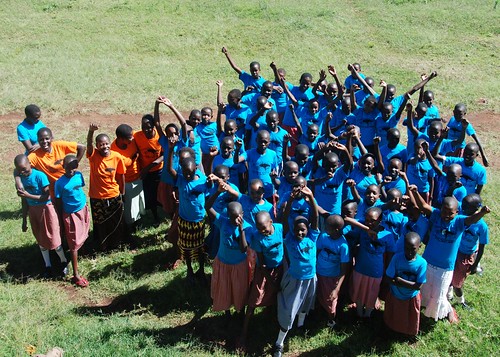 We also asked about what type of house students lived in at home, and while the most common type of house is a semi-permanent one (i.e. temporary structure with iron sheet roof), 13 students reported their houses were entirely temporary or “huts”, and 12 students reported that they lived in permanent houses (i.e. stones and bricks). This implies that we reached a range of socioeconomic groups. Lastly, 48% of students reported that they had educational needs that their parents were unable to meet. For example, one student added in the margin, “I have a problem of story books but my parents doesn’t want to buy for me.”

Community outreach programs are critical to Kakenya’s dream; obviously, educating a select group of 100 students isn’t an efficient way to promote social change. In the not too distant future, Kakenya hopes to open a community center that will make resources (like computers) and education (like the risks and violations entailed in FGM) available to men and women in the community. To me, with this camp, we have reached a milestone here in Enoosaen – as far as I am aware, this is the largest scale community outreach effort yet.

The seminar started with sessions about confidence, self esteem, and self awareness, then jumped straight into the health issues; personal hygiene, female circumcision (FGM), and HIV/AIDS and other infectious diseases. Then we tackled what leadership means, how to be a good leader, the importance of confidence and speaking up, and teamwork. Lastly, we talked had a speaker on children’s rights and had a motivational speech by an impressive Maasai woman who had started her schooling when there were no school buildings and had fought her way through education and up to the rank of Area Education Officer, a post which she now holds while on the side she houses girls fleeing FGM in her home. 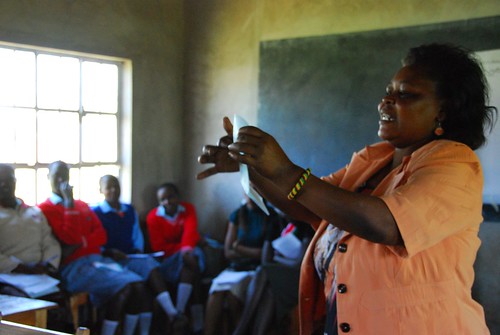 All of this, of course, was interspersed with activities to reinforce the lessons, to foster the partnerships between Enkakenya Centre students and the others, and to let loose. And oh my, did they ever let loose when I introduced them to capture the flag (an all time favorite camp pastime).

At night we sang songs and watched movies (exposing many of these girls to things they have never seen before, and some much needed relaxation after very taxing days), and on the last night, we held a talent show. I have to say that for most of the camp, I didn’t think I was getting across my message about what a talent show is, and I definitely didn’t think the girls were excited about it. Alas, come the last night, every girl in the room participated (with a little coaxing from their counselors!), and some of the shyest girls were up at the front of the room reciting poetry they had learned about the importance of education or singing a traditional Maasai song with their friends. Can you imagine how giddy I was when one group actually put together a drama about FGM? The premise was that they held a traditional circumcision ceremony for 5 girls, and then one girl died as a result of loss of blood after the ceremony. Finally the girls broke into a song about how the community should give up the cutting practice, and it was incredibly moving to hear them raise their voices like that.

Following through in future programs and future years is really key to making sure these programs are effective – they will give us a chance to continue to arm the students with knowledge, and they will give us a chance to follow up and see what happens to the girls we train. Because of limited time and resources, however, we have to find a balance between reaching a diversity of new students and following up with the girls we have already trained and working with them over many years. Ideally, we will identify participants who demonstrate that they have strong potential as leaders, and we will work with those girls to cultivate those seeds of leadership and empowerment. Perhaps they will be our counselors for the holiday leadership workshop 2016! We are also thinking about ways to ensure that every student who attends our trainings becomes a peer educator to the other girls at their schools when they return home. 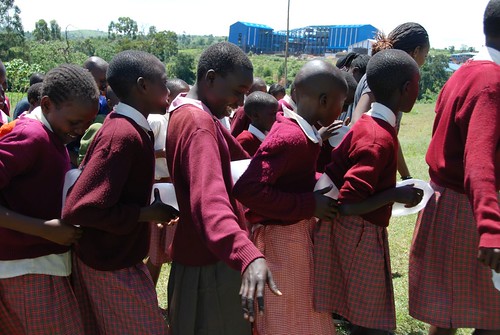 Let’s be clear about something: I have never planned a camp before. I did once work at a summer camp for recently resettled refugee youth, but it was more of a summer school than the feel good girl scouts type. And I have definitely never organized a seminar in a place like Kenya where arrival times, for example, and even arrival days, are apparently open to interpretation. I moved into the dorms with the girls to make sure things ran smoothly, but with the knowledge that despite how many agendas I posted around the school, and how many times I confirmed the topics with our trainers, things could never really run smoothly. Trainers had changed their schedules, the speaker arrived late, the borrowed TV didn’t work for two days, miscommunications abounded, and all in all probably less than a third of the camp went as planned. For those of us involved on the planning end, this time around was about learning how to run such a seminar. But at the least it seemed apparent by the last day that the girls had learned an impressive amount, and it was obvious that they were having a blast.

One really saddening issue became apparent as I went along; most of the adults in the community really don’t like to contribute their ideas and energy without compensation. There is a serious dearth of volunteer sentiment, and because this school is funded by muzungus, many people forget it is about raising the next generation of their community and think they can squeeze out some personal benefit. Surely, it is harder to ask people to be giving with their time when their quality of life is such that money for school fees may often pose a challenge, yet to the end that Kakenya is doing it, she expects others to chip in for the benefit of their daughters, sisters, nieces, and for the future of their society. Community buy-in is the only way that this project can be sustainable, and I learned first hand that it is still hard to weed out those who genuinely wish to be a part of the dream, and those who can’t help but think of personal gain.

Still, the spirit in the Enkakenya Centre for Excellence girls is always an phenomenal antidote to the ugliness of adults. If you ask them about their dreams, almost all of them desire to build a school or hospital for orphans or street children or something of the like. They have internalized Kakenya’s passion for giving back to a community and helping to make opportunities available to all. By the end of the workshop, I noticed Beatrice not only speaking but even jumping in and interrupting Vivian, as the two talked to me arm in arm about the leadership activity we had just played. These girls are up to the challenge, and at the ripe age of 12 they are already setting an example for their peers, and even their parents. 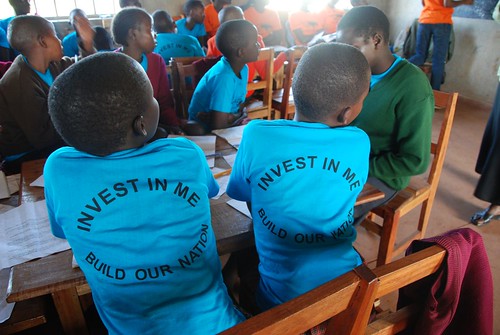