Rachel Palmer (Backward Education Society - BASE): Rachel graduated from the University of Michigan with a BA in Political Science, focusing on international relations and Islamic studies. She then spent two years as a Fulbright English Teaching Assistant on the islands of Borneo and Sulawesi in Indonesia, where she taught and facilitated ESL education workshops for Indonesian teachers. After her fellowship Rachel wrote: "I learned more than I ever anticipated about child labor, working for NGOs, challenges in combating human rights abuses, and legal challenges. This fellowship has been an overwhelmingly positive experience and has shaped my academic focus for next year. I plan to apply to graduate school this fall to study international relations and human rights, focusing on women and children's empowerment."

Last week, after much waiting and various schedule changes, Alex and I were able to visit two Child Friendly Villages.  We stayed in Dang district due to the limited availability of BASE’s car, but were able to see two different examples of Child Clubs.

Child Friendly Villages are BASE’s model for sustainable grassroots empowerment and education.  In this model, the village is held responsible for the well-being of its children and is encouraged to play an active role in promoting child protection and child rights.  BASE staff members hold workshops to teach villagers about the importance of education and encourage child involvement in community decision-making.  Parents are encouraged to send their children to school instead of sending them off to work.  If parents choose to keep their children employed instead of educated, villagers use persuasion and group pressure to convince parents to educate their children.  Additionally, one of the Child Clubs’ functions is to raise money to send village children to school.  The Clubs operate within Child Friendly Villages and are completely managed by children in the village.  The Nepalese government was so impressed by the model, they’ve considered implementing similar models across the country.

The first village was not far from Tulsipur – about 20 minutes away, through winding dirt roads and past dusty brown fields that were just beginning to show signs of green from recent rains.  Yogina (BASE’s secretary – and my friend), Alex, and I waited on the second floor of a small mud brick building in the middle of the village as children arrived for the meeting.  34 kids poured into the room and sat cross-legged on the floor in front of us.  I smiled at the children.  34 pairs of eyes stared back, but only a few children smiled. One tiny girl, probably around 7 years old, loudly whispered something in Nepali to her friend.  I glanced at her, and she burst into giggles. 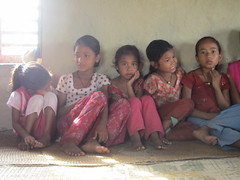 BASE’s field coordinator for the village introduced himself and explained to the children in Nepali that guests from America had come to learn more about the child club and the children themselves.  Each child then stood up and introduced himself or herself by name, age, and grade in school.  In Nepal, last names indicate ethnicity and caste, so many people have the same last name but are not related.  This piece of information proved very useful for me, since I was quite confused as to why everyone in BASE’s office was named “Chaudhary”, thinking everyone was related.  All of the children in the Child Club were Tharu, one of the lower groups in Nepal’s ethnic and caste system, so their last names were all Chaudhary.

Alex and I introduced ourselves.  I then asked, “Have you ever worked as a child laborer?”  Yogina translated into Nepali.  The children shifted on the floor and looked at each other, but no one answered.  I tried again.  Yogina repeated the question.  Silence. 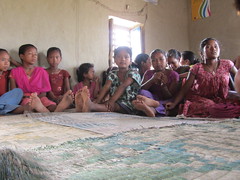 I frantically wracked my brain for a way to get the children to relax, smile, and stay focused on our questions.  We couldn’t continue at this pace – we’d lose their attention.  In addition, we weren’t getting concrete answers.  I taught English in Indonesia for a couple of years and knew that my high school students could easily get bored by TTT – what we in TESL call “Teacher Talking Time.” If high school kids couldn’t sit still, I couldn’t expect 7 to 14 year olds to sit still for an interview…especially if I was the only one talking.

“Have them stand up if they have a brother,” I suddenly said.

Yogina looked at me like I was crazy.  “Please,” I pleaded.  “It’ll keep them entertained and focused and maybe…just maybe they’ll answer questions.”

Yogina repeated my instructions in Nepali, and most of the children, although confused, stood up.

“Now have them stand up if they have two brothers,” I instructed. “Three brothers.” “One sister.” “Two sisters.”  “A goat.” “A chicken.”  The children figured out the activity quickly and giggles rippled across the group.  Children jumped to their feet and turned their heads rapidly to see which of their friends were standing.  We then incorporated our interview questions into the game.  “Now stand up if you’ve ever been a child laborer.”  “Stand up if you know someone in your village who is or was a child laborer.”  Once relaxed, the children were much more eager to talk and answer our questions.

Alex and I learned much about Child Clubs from that meeting.  No one currently in the club was a child laborer, but the children knew of some former club members who had graduated out of the club and who had been laborers. The club had been able to raise money to send those laborers to school and now there were no more child laborers in the village.

In addition, the Child Club was very organized.  The children kept a record of their meetings and met consistently to plan community activities. The club’s leaders collected club fees from each child and saved them for club activities to help children learn fiscal responsibility.  The room was covered in posters and charts drawn by the children with detailed plans for future meetings and monthly activities.  I was very impressed by the leadership and organization exhibited by this large group of children.

Visiting with the children gave me hope that Child Clubs may be the key to empowering communities, combating child labor, and promoting gender equality.  Child Clubs show villages that children can be responsible and mature, as well as financially competent.  Child Clubs rescue child laborers through community activism and fund raising.  Finally, Child Clubs teach children about solidarity and equality, putting both boys and girls in positions of leadership together and teaching them to work together to make communities better.  I hope to see the growth of more Child Clubs in the future. 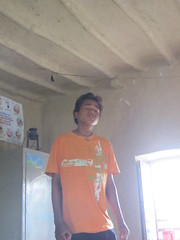 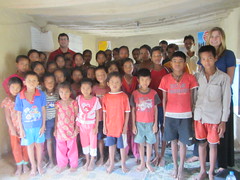