Ciro Castillo and the Unrelenting Search for One Disappeared

In Peru, everyone knows the name of Ciro Castillo Rojo. The young man disappeared almost five months ago in the Colca Canyon, in the southern region of Arequipa. Literally every day since I have set foot in Peru, I have seen Ciro’s face (or his parents’ or his girlfriend’s) grace the frontpage of at least one local newspaper. In fact, catching up with the headlines about his case has become a ritual of sorts for me, as for countless others.

The saga of Ciro’s disappearance and the on-going search for him (or, at this point, his remains) has captivated the nation, and for good reason. The story has all the ingredients of a detective novel: a young couple goes trekking in the world’s deepest canyon, gets lost, and decide to part ways for unclear reasons. The girlfriend is eventually rescued a few days later, dehydrated but in otherwise good shape; the boyfriend is never seen or heard from again.

Daily accounts of the investigation, of the efforts of research and rescue teams—brought from as far as Mexico—of the frequent turnarounds in the case, and of the unflinching determination of Ciro´s parents to find their son, can be found in all media. Partly, this is due to a widely shared suspicion that there is more to the story than the rescued girlfriend is letting on, based on inaccuracies and changes in her story, her apparent lack of grief for the missing Ciro or sympathy for his famiy, and her perceived unwillingness the help the investigation. 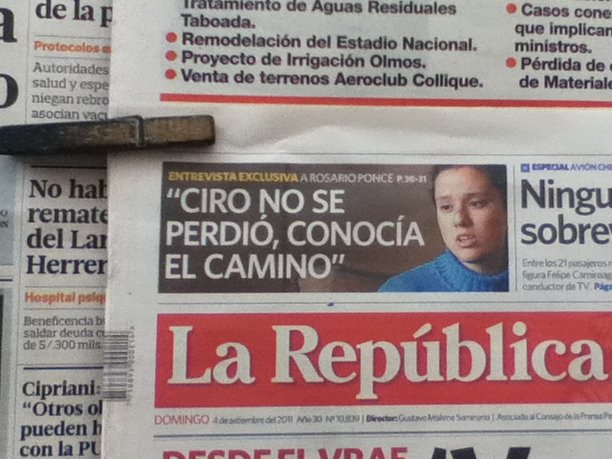 Being based at EPAF, it is hard to miss the obvious parallel between this one disappeared and the 15,000 Peruvians disappeared during the period of the internal armed conflict. Only, while the country gasps and awes at each new revelation, each turn of events in the Ciro case, the search for the 15,000 missing persons that EPAF works to locate and identify goes widely unnoticed.

“Ciro’s parents will never be at peace until he is found”—I read a few days ago at a newsstand. This is true. But equally true is that the parents, siblings, spouses, and children of Peru’s 15,000 disappeared are not at peace either. In the majority of cases, they have not been at peace for more than 20 years. Where are the headline stories about them? Could it be that the fact that they have been suffering for so long makes their suffering less important, less relevant?

A recent street poll conducted for EPAF’s new WebTV show Duro de Roer clearly demonstrated that people in Lima know very little, if anything, about the issue of the disappeared in their country. Asked how many of them there might be, answers ranged from “Ciro Castillo” to “120” to “1 million”.  I like to think that if people were more aware and informed on the issue, popular support for such measures as a national plan for the search and identification of missing persons, the need for which EPAF has iterated and reiterated ad nauseum, would soar.

In my view—and I am fully aware that my position as an outsider makes it only too easy for me to critique—Peruvian civil society has not yet managed to coalesce around the issue with the level of coherence and effectiveness required. And the mainstream media, a potentially crucial ally, has certainly not been as supportive of the issue as it could be. At at time when human rights organizations are finding it more and more difficult to secure funding, the challenges they face are as great as ever…