Workdays here are characterized by a lot of waiting (for people, for electricity, for internet…), giving us a lot of downtime and ample opportunity to have many interesting conversations. Every conversation I’ve had in the past 2-½ weeks, it seems, has included a mention of corruption in one capacity or another and has shown me just how aware and engaged the people I’m working with truly are. Many of these problems, complicated by a colonial past, permeate Cameroonian society and directly influence UCOMAS.

Now, before I get into the meat of my post, I have to make a disclaimer:
*The following is based off of personal conversations and opinions, and is not meant to be taken as hard fact or with any political or partisan intent. Just read it for what it is— a glimpse into how problems, circumstances and history are perceived and understood by the people I’ve met.*

From the scramble for Africa in the late 19th century, through WWI, II and the Cold War, to modern day capitalist intervention, formerly occupied regions have struggled to find stable and independent ground, and Cameroon is no exception.
Even after the wave of independence that swept through Africa in the 1960s, and despite appearances of subsequent reparation and recompense, the controlling influence of the West has not been and can never be fully removed. Among the most common problems Eric, Johanna and I have hashed and rehashed is the degree of foreign presence in Cameroon’s economy and culture.

On the economic front, primarily French and American corporations have mastered the art of exploiting natural resources in Cameroon, exporting loads of raw materials without cultivating a manufacturing industry in the country. Eric gave us several examples, one of which was eerily (or expectedly) similar to the well-known Firestone controversy in Liberia. I say eerily because at the time of this conversation, I was reading This Child Will be Great, the memoirs of Liberian president Ellen Johnson Sirleaf. In her book, she documents the Firestone Tire & Rubber Company’s extensive exploitation of Liberian land and people, exposing how corruption, intimidation and pressure gave the company so much leeway, and the right to continue as-is until 2025. Although Firestone was not a product of colonialism, its treatment of Liberia reflected the colonial mentality of western imposition and exploitation of Africa. The example Eric described was that of an American company that extracts rubber from Cameroon’s ample reserves, but as he explained, the tires are made in China. It’s reminiscent of the same colonial dynamic, only justified through new means.

Colonialism left its mark on culture as well. Last week Johanna and I attended a conference at the Centre Culturel Francais (CCF) on the Rights of the Child in Cameroon. When we told Eric about the event and what we heard, he offhandedly made a comment about how it was the French cultural center that was conducting a seminar on Cameroonian issues. Commendable, yes, but he found it upsetting that the CCF is very well known in Douala, as is the German cultural center, but no one is aware of a small Cameroonian cultural center in Yaounde— the French and German organizations are much more popular.

Furthermore, the languages spoken in Cameroon expose another relic of colonialism. Of course, French is the dominant language spoken in Cameroon, directing business and government. However, the country’s colonial past left it with a bizarre and complicated mix of Anglophone and Francophone regions. As a minority group, English speakers in Cameroon are marginalized and excluded from services as a result of a language barrier within their own country. Citizens of the same state are separated along linguistic lines, making communication between countrymen and women exceedingly difficult. 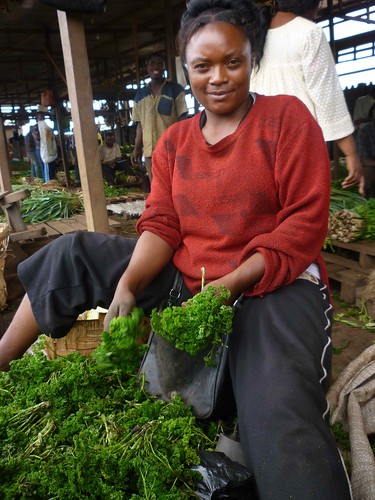 Such barriers are prevalent in Sandaga as well. The market, which is separated into sectors according to product, service or other factors, has one sector allocated specifically for merchants from Anglophone Cameroon (mostly from the city of Bamenda). The woman pictured above is an English-speaking trader in Sandaga, and while women already confront numerous constraints in the market, the Anglophone workers have the added language barrier making communication that much more strained. 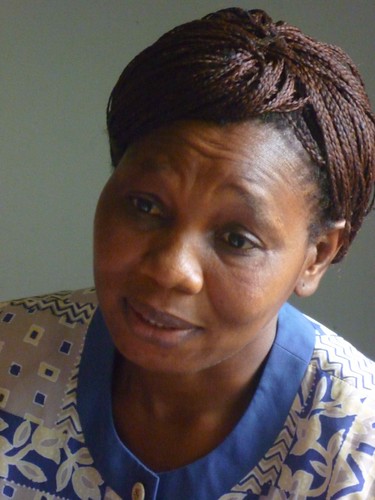 Janet Atam (above), the secretary of UCOMAS, was born in Limbe, an Anglophone village only 40 minutes outside Douala. During UCOMAS’ General Meetings and at each executive board meeting, Janet has to take extra time to clarify and translate points made during the discussions. I’ve noticed that some other members become frustrated when Janet asks follow-up questions, but everyone knows it is absolutely necessary, both for Janet’s knowledge and for transmitting the information to the other women in the Bamenda sector. Despite their efforts, though, Janet’s ability to contribute and participate is hindered by her native language, making UCOMAS face this obstacle in addition to all the rest.

Because the varying languages are an accepted aspect of day-to-day life in Cameroon, the problems they create are easily dismissed. However, in an effort to give UCOMAS the best possible future, such problems must be identified, understood and addressed.