A Jagaran Media Center employee who is studying at the University of Melbourne in order to obtain his master’s degree in journalism shared this video that I think highlights the situation of caste-based discrimination and untouchability around the globe.

It’s sobering to think that such incidents happen anywhere without a great deal of shock and outcry from the general public. However, I have heard in the last couple of weeks a sort of dismissal of making a case for Dalit rights. What about me? If personal circumstances aren’t ideal, then why should I care about a system that oppresses people with manifestations of both direct and structural violence against them?

Unfortunately, we get used to certain structures in society. They become commonplace, perhaps we even get comfortable with them. Every morning on the way to Jagaran Media Center the tempo goes through a rough patch of road right before my stop. I banged my head once before I learned to keep it ducked down and lay it on my backpack, but I’ve gotten used to it. Yesterday I fell asleep, and that horrible road didn’t wake me up and I missed the stop. It’s human nature to adapt and get used to things. But, that’s the scary part. If we become comfortable with these sort of oppressive societal structures then we only react to extreme situations. We aren’t concerned with changing society’s behavior and attitude towards a group of people, but we definitely want a shocking incident addressed. 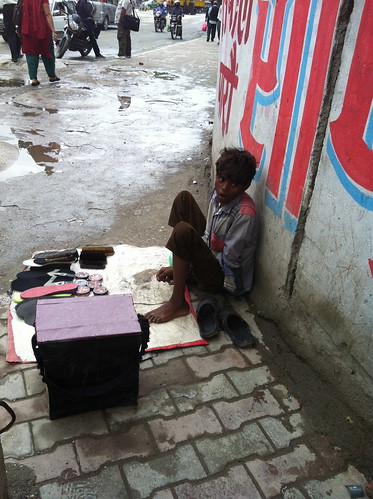 A young boy with sandal repair kit and cleaning supplies for shoes, a trade usually performed by Dalits.

That’s why the work here at Jagaran Media Center is so important. They are working on the structure that allows rampant discrimination, and not just reacting to an event. They have promoted a lot of dialogues between Dalits and non-Dalits at the village level where some of the most awful direct violence occurs, and the journalist training that the Advocacy Project has also been a part is available to both Dalits and non-Dalits. I have met three staff members who were a part of Jagaran Media Center’s radio listener clubs in their local districts, and who now work for them here in Kathmandu. It is the sort of approach that will change the society thinks about caste and caste-based discrimination and hopefully go a long way towards redefining what that societal structure actually means.