Commemorating the Siege of Sarajevo 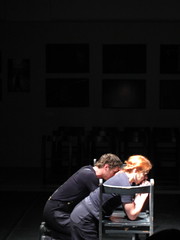 Last weekend was the second annual Dani Sarajeva (Days of Sarajevo) marking the start of the siege of Sarajevo in 1992. The Women in Black Network from Serbia joined the Youth Initiative for Human Rights in commemorating the siege, which is known as the longest in modern warfare.

Opening night was a photo exhibit and reception at the Center for Cultural Decontamination.

On Saturday evening, Women in Black from all over Serbia joined Fondacija CURE in a street action in the old Bohemian Quarter of Belgrade, Skadarlija. The interactive installment included tables displaying the types of food available during the nearly 4-year-long siege, marked with the extremely inflated prices those trapped in the city were forced to pay for staples such as cooking oil and flour. 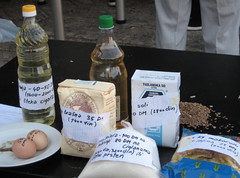 The performance also included serving those in attendance the type of food citizens of Sarajevo were able to cook with the limited supplies available to them during the siege. Members of the Women in Black Serbia held signs and silently expressed their solidarity. 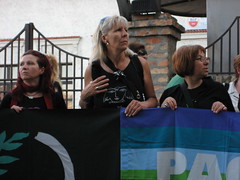 Afterwards we attended a play entitled Trg Ratnika (“Warrior Square”) by Nick Wood. It is the story of a Bosnian family during the war and then their new life later, after they have immigrated to Manchester, England. All the characters are portrayed by only by two actors, a man and a woman. Even though I barely understood a word, I was completely entranced by the actors’ facial expressions, movements, and the setting of the stage. 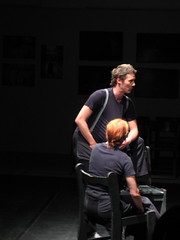 The set was one of the most creative uses of minimal space and props I have ever seen: Images were projected onto a large screen behind the stage, and the actors’ shadows were cast across various scenes. There was a photo backdrop of a dilapidated apartment building, a schoolyard, the seashore. It was just enough to create a place, a mood, without the disruption of shuffling around any physical sets. I was amazed by the actors’ ability to rapidly transition from role to role: from the joyful exuberance of children who have just found their long-lost toys, to the terror and despair of those trapped inside their home during a bombing.

When you don’t know the plot beforehand or very much context and can’t follow the lines, then everything becomes character-driven! It was a chance to pay extra attention to the visual elements of the play in front of me.

All of this reminded me that for these actors, these audiences in the Balkans, this is not the same as a modern-day production of a Greek tragedy or even “The Diary of Anne Frank.” This has happened in such recent memory that the pain and the possible catharsis must be so much more real and present.

It is fitting that my next post will be about the day I spent observing Serbia’s Special Court for War Crimes, and one of Women in Black-Serbia’s core missions: transitional justice.