“With our memory, we resist impunity” – Statement by the relatives of the victims of La Cantuta in the protest against a possible presidential pardon for Alberto Fujimori

On Friday, July 15th, I attended a protest march in Lima Centro against a possible presidential pardon to ex-president Alberto Fujimori. A few weeks before, I had attended another event in opposition to a pardon; many of them have been taking place over the last few weeks as the presidential term of Alan García is coming to an end (Ollanta Humala will take over as of July 28, 2011, which is also Peru’s national independence day). What made last Friday’s protest special was that it was organized by the relatives of the Cantuta victims (see my previous post) in commemoration of the 19th anniversary of the massacre. 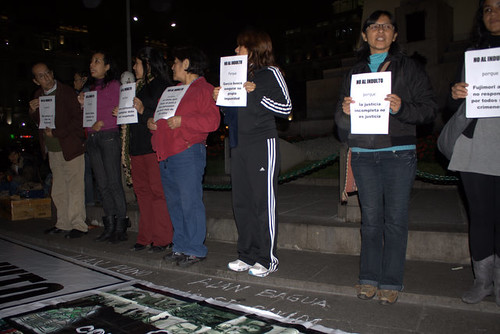 Around the time of the Peruvian presidential elections and the candidacy of Fujimori’s daughter Keiko, I wrote about what Alberto Fujimori represents for human rights, or more to the point, for impunity in Peru. His sentencing to 25 years in prison on charges of human rights violations and corruption represented a break with the long tradition of impunity in the country, and was internationally regarded as an important step in global efforts to end impunity in cases of crimes against humanity. 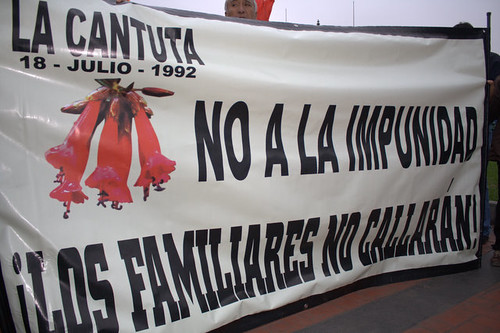 The forced disappearance and execution of nine students and a professor from La Cantuta is also very symbolically charged in Peru as it was one of the three cases that Alberto Fujimori was condemned for in 2009. He was deemed to be the intellectual author of La Cantuta, as well as of the Barrios Altos executions and the kidnappings of journalist Gustavo Gorriti and businessman Samuel Dyer. The Cantuta relatives, including EPAF’s Gisela Ortiz, sister of one of the students killed, are emblematic of the fight against impunity in Peru. 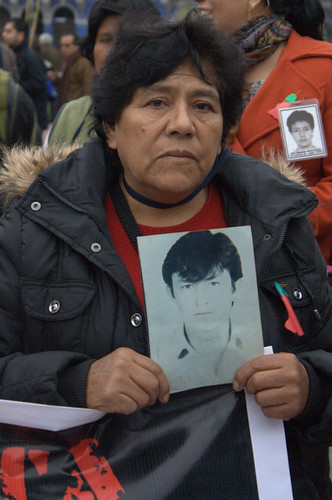 Unsurprisingly, Fujimoristas have never accepted the sentence against Fujimori, and have been fighting against it in all ways possible. A few days before the presidential elections this past June 5th, Fujimori’s defense filed a plea with the Constitutional Tribunal to find that the conviction is not valid because the judges were not impartial. According to Jo-Marie Burt, an acceptation of this argument by the Constitutional Court would amount to a revocation of the ratification of the original sentence, and a new trial would be held that could lead to Fujimori’s exoneration, or to a different sentence that could facilitate a presidential pardon. The plea will be revised, during a public audience, on the 4th of August. 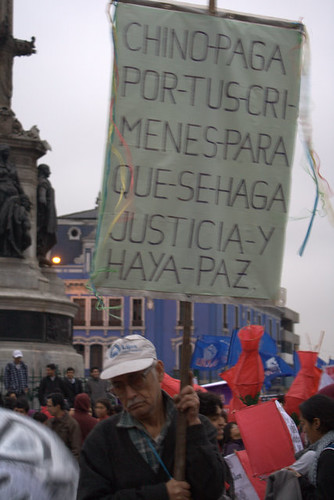 Following the defeat of Keiko Fujimori in the presidential elections, a new story quickly began to dominate headlines, that of a possible presidential pardon to Fujimori on “humanitarian principles”. It began with a congressman commenting to the press that President Alan García should pardon the ex-president because he is “old and apparently sick.” Then there was intensive press coverage of the flailing health of the former president— that he suffered bleeding in his mouth; that his mouth cancer could be recurring; that he had lost 15 kilos; etc.

Some have argued that this represents a change in strategy by fujimoristas attempting to free the ex-president; a media campaign pushing for a presidential pardon. Despite the fact that an independent doctor confirmed Fujimori’s condition was not life-threatening and that his weight loss was due to depression, and that various analysts have stated that a pardon would be illegal under both Peruvian and international law, the rumours of a presidential pardon have not completely subsided. 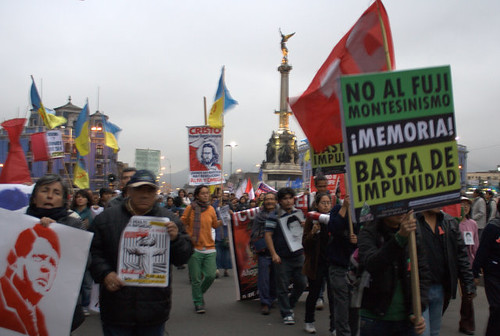 Followers of Peruvian politics fear that Alan Garcia might pardon Fujimori, presumably in exchange for a future promise of protection from prosecution for human rights violations committed during his first term as president during the 1980s. Let it not be forgotten that his current administration has also been responsible such disasters as the 2009 massacre in Bagua. 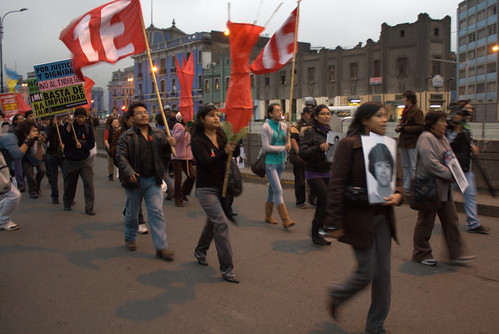 Given the severity of the crimes committed by Fujimori and the lack of a legal or medical foundation for his pardon, I have to admit that I have trouble understanding why the possibility of a pardon on humanitarian grounds is even being discussed. But if there is anything to be learned from Peruvian history, it is that when politics are concerned, nothing is too far-fetched.

The question is not, as some out here have tried to turn it into, whether or not Fujimori deserves to die in prison.  Personally, I doubt anyone does. The point, however, is that reputable doctors have stated that his condition is not life threatening. The point is that his conviction is the most potent symbol of the fight against impunity in Peru, and that his pardon would represent a terrible blow to human rights and to the victims and victim’s relatives of the atrocities committed by his regime under his orders. 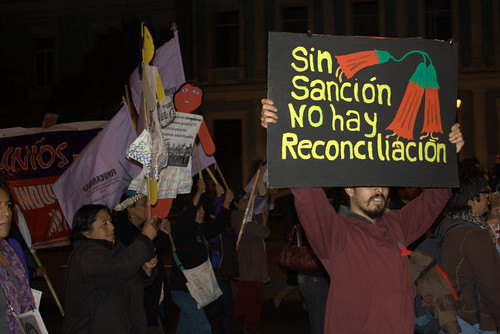 UPDATE: I finished writing this post a few days ago but for a variety of reasons I have not been able to publish it until today. As Ollanta Humala takes over as President today, it seems that Alan García decided that a pardon to Fujimori was not in his best interest. The issue is not completely over, though, as back in June, President-elect Ollanta Humala stated to the newpaper El Comercio that he would consider pardoning Fujimori on humanitarian grounds if his health worsened. Moreover, the examination of the “Habeas Corpus” presented to the Constitutional Court by Fujimori’s defense will take place next week…