When I was 15, my parents took me to see Oliver Stone’s World Trade Center, one of the earliest movies about the 9/11 attacks.

I don’t recall any details of the film or even whether it was any good, but I still remember being struck, at the time, by a strange sensation of familiarity. 9/11 had been something I’d experienced—not firsthand, but I remembered where I’d been as it was going on, and how I and those around me had reacted. To see something that had happened in my own life presented as “history” in a movie felt like a milestone, a sign of maturity.

For a child, history can seem inextricably separate from the world you live in—at least, that’s how it was for me. An event as recent as the Iranian hostage crisis was placed in the same category as the Kennedy assassination, the Civil War, the fall of Rome; they were all part of some world separate from my own experience. I loved history, but in some subconscious way it was never completely real.

I was born 16 years after the fall of Saigon, so that’s how the Vietnam War felt for me. Since I had no memories of it and it didn’t impact my life in a tangible way, my knowledge of the war—through history class, books, movies—seemed remote and distant. Even years later, when I became more interested in the war and studied it in greater depth as an undergraduate, it didn’t resonate in quite the same way as something like 9/11. I think most Americans of my generation see the war as something for our parents and grandparents to argue and reminisce about, an event from a half-imagined past world fundamentally separate from our own.

But not all young people in the US or especially in Vietnam have the privilege I’ve had of living outside the shadow of that war. And for a tragic number of young Vietnamese, a decision made by bureaucrats in a distant land years before their birth, fighting a war they were never a part of, has irreparably damaged their lives. 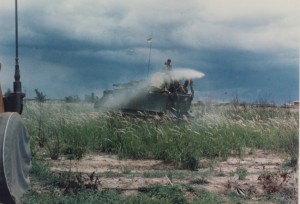 A US Army APC spraying Agent Orange during the Vietnam War.

In 1961, President John F. Kennedy authorized Operation Ranch Hand, the defoliation of parts of South Vietnam’s dense jungle, which was used as cover by North Vietnamese and Vietcong forces. To accomplish this, the US would spray an acidic compound called Agent Orange, which produces a chemical called dioxin that is fatal to plants—the military ignored warning signs that dioxin contamination could harm humans as well. Over the following decade, around 12 million gallons of Agent Orange would be sprayed in Vietnam, targeting crops as well as jungle. But it later became clear that Agent Orange also devastated the bodies of those exposed to it, as seen not only among Vietnamese soldiers and civilians but US servicemen as well. A number of very serious illnesses—including Parkinson’s disease, prostate cancer, lung cancer, and leukemia—have been linked to Agent Orange exposure.

Much of this is fairly common knowledge in the US. What many don’t know, what I didn’t learn until recently, is that Agent Orange’s effects aren’t limited to those directly exposed—their children, born after the guns fell silent, often bear the burden as well. According to the Red Cross, at least 150,000 children in Vietnam have been born with serious birth defects as a result of Agent Orange. Even though many of these children are grown up now, their disabilities are often serious enough to make it impossible for them to live without full-time care—in a very real sense, their childhood may never end.

It is these people and those who care for them—generally their parents—who I will be working with this summer as an Advocacy Project peace fellow. I leave for Vietnam in a few days, and my final destination—Quang Binh province on the central coast—was the southernmost area of North Vietnam during the war and, as a consequence, a particularly appealing target for US bombs and Agent Orange. Working with my host organization, the Association for Empowerment of Persons with Disabilities (AEPD), I’ll be helping to provide vital assistance to families living with Agent Orange, providing them with the tools to relieve some of the economic hardships they face. It hardly seems real to me as I write this, sitting at a desk eight thousand miles away surrounded by half-packed luggage, but I will soon be confronted with the horrific consequences of the Vietnam War. 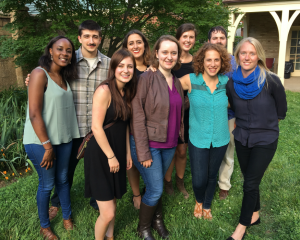 Me and my fellow Advocacy Project Peace Fellows at training in Washington, DC.

I recently returned from the Advocacy Project’s weeklong training program in Washington, DC, where an excellent set of guest presenters gave me and the other eight incoming fellows a whirlwind introduction to all the skills we’ll be using to help our organizations—everything from photography to video editing to podcasting. I definitely feel a lot better prepared than I did before training, but I confess I’m still uncertain about what I can contribute. What can someone with no experience in Southeast Asia, no language skills, and minimal familiarity with Vietnamese culture hope to provide to an organization like AEPD, whose staff understands the issue of Agent Orange far better than I can? I’ll find out, and do everything I can to reward the Advocacy Project’s trust in my skills.

I’m not certain what to expect from the next few months, but here’s what I’m expecting from this blog. For one thing, my future posts won’t be as long-winded or meandering as this one. I’ll try to focus on more specific aspects of my time in Vietnam, and hopefully tell individual stories of the people I meet and the places I visit. I’m also not sure what the tone of this blog is going to be; this post notwithstanding, my writing, like my personal style, is often light and irreverent, but that obviously won’t be reflected in writing about one of the most harrowing topics imaginable. As a result, the mood of this blog may shift wildly between posts—that may be jarring for the reader, but it’ll probably reflect my experience in Vietnam fairly well, so I suppose we’ll all have to get used to it.

Probably my biggest hope for the blog itself is that the voices of those affected by Agent Orange, the people AEPD and the Advocacy Project are serving, begins to drown out my own voice in later posts. Obviously this blog is meant to reflect my own experience, but in the end I’m going to Vietnam to share their stories. My own story isn’t ultimately all that interesting—theirs are essential.