Confronting the Past Part II: Prijedor

One of Women in Black’s main philosophies and practices is “Confronting the Past – A Feminist Approach.” I got another first-hand lesson about what this means a few weeks ago. 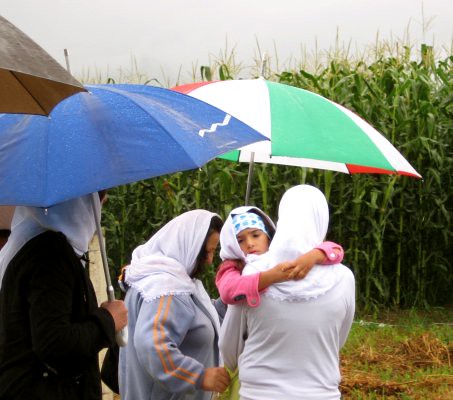 A day after the world learned that Radovan Karadzic had been apprehended, I got on a bus with the Women in Black to go to Prijedor, a region in the northwestern part of Bosnia, in Republika Srpska. We were going to a memorial service for the victims of an “unrecognized genocide.” During the war, Bosnian Serb forces created three concentration camps in the region of Prijedor: Omarksa, Trnopolje, and Keraterm. Thousands of Bosnian Muslims and Bosnian Croats were imprisoned, tortured, raped, and killed in these camps. There are many places like Prijedor, that don’t have the infamous ring of “Srebrenica,” but that were scenes of war crimes all the same.

Appropriately miserable weather accompanied this commemoration, just as it did at Srebrenica – although this time it was not hot, but raining and surprisingly cold for July. 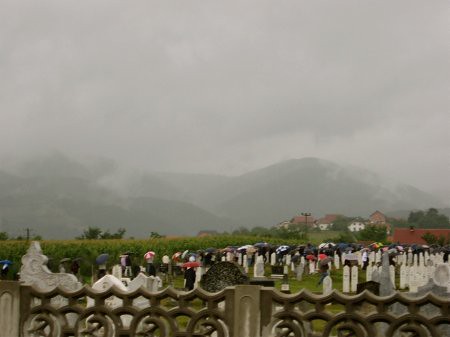 While we were there, we stayed with a Bosnian Women’s association. They had first come together as a mutual assistance organization when they were living as refugees in Croatia. When the women returned home, they continued their service to the community. After the memorial service, when we returned soaking wet, our hosts gave us warm, dry sweaters and stockings to change into. As we drank some of the most delicious Turkish-style coffee I’ve ever had, the women talked. As usual, I understood only a tiny percentage of what was being said; but I could tell that the Bosnian women were talking, and the Serbian women were listening. As our hosts’ eyes filled with tears, I knew that they were talking about their lost friends and relatives, whose pictures adorned the walls of the dining room across the hall. I was witnessing the feminist approach to confronting the past in action. 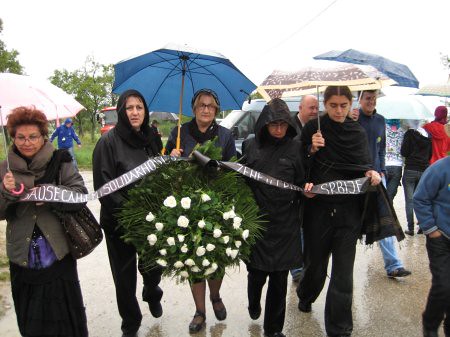 To me this is the most important aspect of Women in Black’s activism. They condemn all war crimes committed by everyone. And they do it not only through political actions and publications, but also on a personal, relational level. It is no longer a division between nations or ethnicities, but a division between people who desire peace, and those who have sought to destroy it. A division between civilians, women, children, elderly people– and those who persecuted them. I see this as a much more reasonable way of categorizing people. This is not the sort of relativization that leads to saying “Well, all sides committed atrocities, so what can be done about it?” And it is equally not the sort of logic of victimization that ascribes all the guilt to the others. A civilian is a civilian, not a Serb, Croat, or Bosniak. People are made innocent or guilty by their actions, not their ethnicity. Embodying this and living it on a personal level, as the Women in Black and their partners in the Balkans do, is one of the hardest and also one of the most critical steps toward reconciliation and peace.