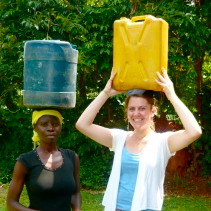 Rebecca Scherpelz (Gulu Disabled Persons Union – GDPU): Rebecca is from Indianapolis, Indiana. She graduated in 2008 from Butler University with an undergraduate degree in International Studies and Anthropology/History. During her studies Rebecca led service trips to Uganda, where she lived and volunteered in Gulu and Kampala. Prior to her AP fellowship Rebecca spent over two years working with Best Buddies, an international non-profit that supports people with intellectual and developmental disabilities. After her fellowship Rebecca wrote: “I think I found what I want to do long-term. I’d like to go into a long-term career of recipient-donor relations, empowering recipients to speak up for what they need the most... It really made me think about what we give, from dollars to second-hand things, and how recipient organizations deserve the very best…not just leftovers.”


Disability, war, and the social context of PWD

One of my roles with GDPU is to help facilitate weekly “Capacity Building.” Each Friday, one person presents on a specific area to help enhance the overall skill set of the staff. Last Friday, we had our first one: Common Disabilities in Uganda, presented by Ojok Patrick. What was supposed to start at 2PM and involve the staff of nearly 10 people ended up starting at 3:00 and was attended by Patrick, Ojok Simon, and me. At first frustrated by the small turnout, it ended up being one of the most enlightening, intimate, and eye-opening conversations I’ve had here.

Disability Overview:
Sparing you the specifics, the training was a basic overview of the cause/effect of the most common physical disabilities in Uganda. Obviously, disabilities caused by accidents, genetics, or complications before, during, or after birth (such as hearing/visual impairments, spinal injuries, spine bifida, or cerebral palsy) are not unique to Uganda. The fascinating and new information, rather, was in regards to disabilities that are (a) caused by disease such as polio, malaria, poor nutrition, and situations that are primarily eradicated in the US; or (b) a direct result of the 20+ years of violent war that ravaged Northern Uganda (and continues in other parts of East Africa today). During this “height of insecurity,”* the population of PWDs rose dramatically due to gunshots, landmines, forced amputations, and other war-based tragedies.

*Side note on the war:
Briefly, the Lord’s Resistance Army (LRA) is a rebel group who is responsible for countless atrocities in Northern Uganda and the surrounding region since 1986. During more than two decades of extreme violence, the LRA forced more than 2 million people into Internally Displaced Persons (IPD) camps, abducted between 30,000-55,000 children to serve as soldiers and sex slaves, and terrorized the region. Though Gulu and most of Northern Uganda has been considered relatively peaceful since 2006, the damage, poverty, and trauma of their ruthless brutality left deep scars on the people and the region (For more, visit http://www.resolveuganda.org/about-the-crisis).

In regards to disabilities, the 20+ years of rebel insurgency had both a direct and indirect impact on the people of Acoliland. The LRA planted an unknown number of landmines, leaving 800+ landmine survivors who live today with lost limbs, shrapnel scars, and nightmares of the incident. Monica – a GDPU worker who trains fellow landmine survivors how to plait hair – lost more than just her leg…she also lost the child she carried on her back.

Beyond the obvious physical and mental trauma associated with these and other tragedies of the insurgency, the societal impact on PWD leaves them among the poorest of the poor. Feeling like it was okay to ask more direct questions to Patrick and Simon (both PWDs themselves), I pried a bit into the current perception of PWD in Gulu and the surrounding region (For info on PWD in IDP camps, visit http://tinyurl.com/5vqs6wy).

Social Context of PWD in Gulu:
Though PWD account for 14-20% of the population of Northern Uganda (more accurate data is not available), they are among the first to be excluded. As Patrick and Simon explained, there is a lack of information regarding the causes of disabilities, leaving parents to blame each other for what is perceived as a misfortune or curse from God. Additionally, a child with a disability may be “counted” differently by parents who say, “We have four children and one who is disabled.” People also feel that PWD do not have the same needs as “able-bodied” individuals and are consequently not a priority. As a result, they might not receive essential medical treatment, assistive devices, go to school, or be empowered with basic skills in independence and responsibility. This feeds into the misconception that PWD are helpless, dependent individuals who are only the recipients of handouts and pity. PWD are favored and receive too many support services. Why does a PWD need such an expensive wheelchair? All expensive things are a luxury, and luxuries are not needed! Why should a PWD be allowed to be pregnant, anyway? Just another burden! 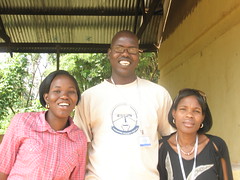 During another conversation with Moses, Gloria, and Moreen, other GDPU staff, we talked about this more. “People don’t see PWD as important. They cannot do anything,” Moreen said. “The blind are neglected. On the road, they are finding their way, but people don’t move from their way.” Moses added, “They need to go to town safely. They have needs, too. They can’t sit at home.” He went on to share about the discrimination factor towards PWD. In some instances, people with epilepsy were not allowed to eat at a restaurant because of the false fear that you can “catch” epilepsy through saliva. In a society with so many prevalent transmittable diseases (malaria, tuberculosis, and HIV/AIDS, to name a few of the most common), you cannot necessarily blame society for their ignorance. Still, where do awareness, understanding, and acceptance start for a region plagued with so many challenges?

PWD + Advocacy:
I’m quickly learning that “advocacy” for PWD is a complex demand. As Friday’s discussion continued, Patrick noted, “Without the war, advocacy wouldn’t be such a problem.” An impoverished nation even prior to the LRA, Northern Uganda experienced major setbacks that only perpetuate the cycle of poverty today. When the biggest concern is the immediacy for a short-term solution to feed your family for tomorrow, is there really time or energy left to mobilize support for such a specific population?

The short – though difficult – answer is a resounding YES. For the sake of the individual PWD as well society as a whole, there has to be. And that’s where GDPU and its advocates come in. More on advocacy, opportunity, and leadership for PWD coming soon…