July 1st came and left, and field activities haven’t begun yet. As I mentioned in “North”, zivik’s money is late and Sini Sanuman cannot start implementing the programme with no funds. It’s a little distressing, our hands are tied and I feel a little powerless in the face of these issues.

Ideally, the bank will be able to advance some of the money to at least put the wheels in motion, travel to the north, pay the deposit and first month rent for the centres we need to acquire. It is absolutely imperative that activities begin soon, identifying victims through workshops and community meetings is the first step towards an effective programme for the next six months. Without this first portion of the project, nothing can be put in place.

While I’m feeling a little restless on zivik’s side of things, UNICEF has been keeping us very busy in the office, where we’ve been working on revising our proposal and budget for them non-stop. Now I know proposal-writing and budgeting aren’t anyone’s favourite pastimes, but working on those has truly been challenging.

Again, as I mentioned in my previous post, UNICEF decided to support Sini Sanuman through funding for their activities in the north, which is great news for us, but mostly for the communities in the Gao region. Harmonising zivik and UNICEF’s projects while adding the “northern” portion was a lot of work. Going through the proposal and budget with my colleagues, moreover, opened numerous doors into a deeper understanding of their work and how activities are being implemented. Working so closely on this inevitably sparked a few debates and (friendly) discussions. Crossing the bridges of culture, gender, age and world view isn’t always easy, and the past week has proven that for me.

I began thinking intensely about the system that we are working within, talking to different colleagues and trying to make sense of why so much money is being allocated to items that simply don’t seem they should be worth that much. Per diems, coffee breaks, food and travel costs. Ceremonies. And trainings, so many trainings.

I began researching issues linked to this, stumbled upon a paper by the African Development Bank from earlier this year entitled: “The Uses and Abuses of Per-diems in Africa: A Political Economy of Travel Allowances”. The paper asks the question I, too, am asking: do per-diems really increase motivation or is it only a means to get people to the table? The AFDB aside, I am trying to accept the amounts allocated to Sini Sanuman’s secondary beneficiaries at the expense of our primary ones. I’ve challenged my colleagues, probably irritating them from time to time, but I am told people simply wouldn’t show up if there’s no decent (and expensive) food, if reimbursement for travel is less than what is made public, if there are no per diems. Mariam, who is quickly becoming my rock here in Bamako, confirmed my suspicion: it’s the system, and that’s just the way it’s done.

On a brighter and unrelated note, I’ve now been in Mali for one month, and officially extending my time here for another six action-packed ones! To celebrate that, I used my stove top for the first time and made: coffee. This photograph, I was told, “has the right amount of African flavor with a touch of nostalgia that only a coffee maker can express for us Italians” (cit. FP). 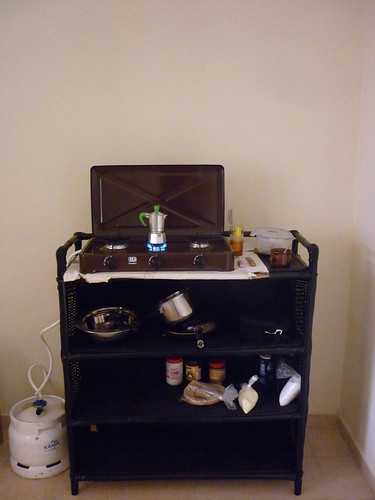