The weekend was something of a sampler platter of the amazingly distinct and rich cultures of Southern Belize, providing a taste of what should be celebrated and what could be lost. 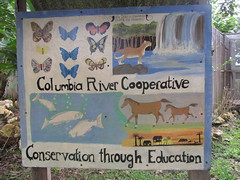 Friday, I drove with SATIIM staffers to the Q’eqchi Maya village of San Pedro Columbia.

The plan was to visit one of the sites of a cultural exchange summer camp that SATIIM is coordinating with others.

It’s an exchange between kids from Columbia and Barranco (the Garifuna village on the edge of the national park), to learn Maya, Creole and Garifuna music and other arts, combined with environmental education.

The Columbia host is Lisa White Kile, an American teacher who runs an organic cooperative farm. Irked by the fact that proponents of oil drilling had presented their case to Columbia schoolchildren, Lisa looks forward to offsetting this propaganda with presentations from SATIIM on the consequences of drilling. One idea is to have the campers creatively portray animals that would be affected by a spill in the national park – manatees, fish, birds, etc.

It’s all very exciting, but there’s some question about funding. It would be heartbreaking to see it fall through. The camp idea is intriguing for a number of reasons. One is the idea of Mayan kids learning African drums, as some already are from Emmeth Young, the coop’s resident Creole drummer. Second, it brings to mind something that Alvin Loredo, Barranco’s tour guide and community organizer, said to me on my last visit: Barranco has no leverage against US Capital Energy if it’s acting alone (the company can easily enter the park by another route). All the communities in the region – Maya and Garifuna – need to come together.

Finally, you would never guess by driving through Columbia, past overgrown fields, traditional palm leaf homes, and signs for the Lubaantun Mayan ruins, but kids here are at risk. There are actual local Bloods and Crips, and reports of terrible crimes. The village is being linked by paved road to the Pan-American Highway and Guatemala. Locals foresee the acceleration of a loss of peace, natural beauty, security, and traditional culture. 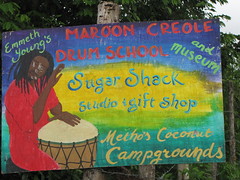 Saturday gave Jill Benson (my Australian roommate, an oil and gas specialist volunteering with SATIIM) and me a taste of Garifuna culture in Punta Gorda. We visited an art gallery run by local veterinarian and artist Ludwig Palacio. Ludwig was outside, carving an old mango tree into an undulating coffee table of reproductive organs. He told us a story I hadn’t heard before about his famous musician cousin Andy Palacio, and why he had decided to dedicate his (short) life to preserving the music and language of his ancestors. The Garifuna trace their origins back to Africans who survived a slave shipwreck on St. Vincent, and intermixed with local Caribs and Arawaks, and apparently Andy had his own near shipwreck when, at age 18, he hit a storm on the way from Belize to Nicaragua, where Garifuna culture was dying out. His captain detoured to a village where Andy met an old Garifuna man, who was astonished to find that the young Palacio spoke his language. The emotional response from the man impressed on Andy the danger that his language and culture could be lost not just to Nicaragua, but to the world.

As we left the gallery, we heard what sounded like the deep, hypnotic drums of a Native American pow wow. We biked down the street and found a gathering in front of a house – men beating enormous drums and women in check skirts and big collar blouses swaying and shuffling feet to the rhythms.

A spectator with gold teeth and penciled brows explained to us, ‘They believe… I don’t believe, but the Garifuna people believe when ancestors die they’re still around. So they’re dancing for their ancestors.’

The women were paired up now, swaying to the drums with hands on each others wastes. One woman in each pair seemed boneless, hanging her arms and head loosely as she swayed like a willow. The spectator told us those women were possessed by spirits. “It’s not a good feeling,” she added.

She also said sometimes they don’t like people gawking. Once, ceremony participants saw her watching through a window and poured rum on her. We decided to move on. 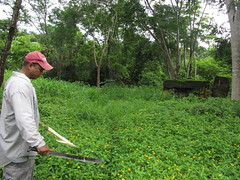 The wee hours of Sunday saw the usual storm. It always sounds like a bowling alley opening for the night above your head, followed by a full-on military bombardment. You might find yourself wondering, ‘Should I be concerned?’ Apparently. The rain has become more Niagara Falls-like, heavier and longer lasting. And on Sunday morning there was talk that the Moho River was likely to flood, cutting off access routes to the Maya communities SATIIM staffers and I were planning to visit.

The staffers decided it would be unwise to travel, so it was another lazy day around PG. In the morning I visited Wil Maheia’s 600-plus acre rainforest farm, tucked off the road out of town. It was extraordinary to see how the teak, mahogany, citrus, vanilla, coffee and cacao (for Vosges chocolate bars) were grown along the edge of the forest. It was also amazing to see remnants of the farm’s past… After the American Civil War, a group of Confederates moved to Belize to continue their plantation livelihoods. Because slavery had long been abolished here, they imported East Indians to work as indentured laborers on sugar cane fields. Wil’s great, great grandparents had been brought from India to work at this very site.

The rest of the day involved chores and reading, and watching the world go by from our porch. We live at the main entrance to town, above the ‘welcome’/’return soon’ sign, and across from the bus stop. We see the Mayan villagers come in with their goods on market days (and sometimes they see us, knock on our door, and turn our living room into a showroom of arts, crafts and homemade coffee and chocolate).

Sunday evening, Spanish-speaking laborers were entering town, lugging duffels apparently packed for the week. Two looked delighted to encountered an old bicycling ice cream vendor. They stopped to buy some, then continued on, gripping cones of princess pink strawberry in one hand, dusty bags in the other. 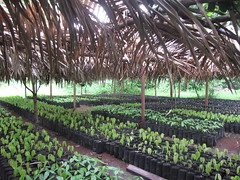 Monday was July 4, and young Americans (largely Peace Corps volunteers) seemed to be pouring into PG from the countryside.

SATIIM’s five park rangers also came in, taking buses up the same roads we had avoided in spite of ongoing heavy rains. They came in for a meeting that coincided with the expiration of their contracts. Upon arrival, four out of five found that their contracts are not being renewed, as SATIIM searches for the funds to pay them.

Karyn Stein, the development coordinator, said she was pretty sure funding would come through in the next couple of months, and they would all be re-hired. Egbert Valencio, the ranger from Barranco, said he didn’t mind continuing to work even without immediate pay.

Staffers had hoped Egbert would give presentations at the summer camp, but they now wondered just how much volunteering a (temporarily) laid off person would be willing to do.

Before the men headed back to their various villages, I asked Egbert what they would do if the roads were flooded. He said with a shrug and a smile that they would get off the bus, wade through the water, and walk or hitchhike the rest of the way… however many miles that might turn out to be. 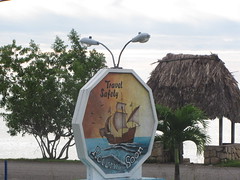