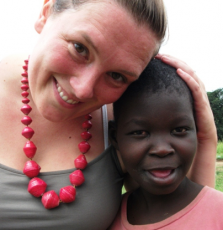 I got a little bit teary when Mr. Charles Ojok said he was leaving yesterday to go to Kampala to improve Ugandan Sign Language. At present it is an adapted version of American Sign Language and lacks many Ugandan terms. Charles also teaches sign language to deaf and hearing persons at GDPU and has taught many of the local teachers.

In the afternoon of my first day at GDPU I borrowed a bicycle and followed him deep into Acholiland to, Laroo, a village where one of two schools for the deaf is located. Of an estimated 450 in the area it is estimated that only 60 attend school. Ten of the children live at the school.

Charles pulled on one of the girls shirts and signed that she should clean it. It seemed that these young children were left completely by themselves with nothing but a field, some bunk beds and some hollowed out buildings with broken windows. I employed all kinds of “stupid human tricks” to get them laughing and then taught them a version of paddy cake.

Charles and I returned the next day when they were in school. Although they were neatly dressed in uniforms and the board was covered in multiplication tables the lack of pencils and paper, especially for deaf children was disheartening. This lack of materials is compounded by the fact that the children have varying levels of understanding sign language. Some of the children were rendered without any ability to communicate sentences. It was amazing how they made up for it with incredibly demonstrative expressions, coos and gestures.

I was about to leave when the teachers said, “The children have something they want to say to you. “ “Yes, “I said, “What can I do for you?” Gulu is firmly in the grip of World Cup mania…. “We want footballs.”  So simple. So next week I’ll go to the one place in Gulu that sells sports equipment and return to smiling children.