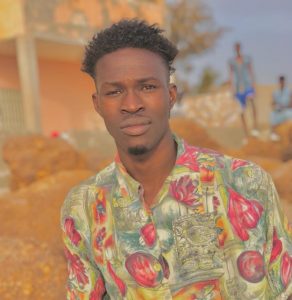 Ama Ndiaye Thiombane is a returned migrant from Sendou who works hard at an export warehouse in Dakar. I had the pleasure of meeting Ama on my first visit to Sendou. He was quiet and warm-hearted, telling me about his experience attempting to migrate to the Canary Islands. He explained that he wanted to be a rapper and had even rapped about his experience at sea. He expressed his desire to be a rapper, above all else, but wanted to find work that could support his parents. He knew that traveling to Spain would bring him the best opportunity to do this.

Ama has attempted to migrate to the Canary Islands in September 2020 and was unsuccessful. He started working at the warehouse three years ago. He says the work is good, but the pay isn’t enough. He says he is luckier than most. He is not sure what the future holds for him but said that he intends to stay in Senegal now, the trip was very hard for him.

He hopes to spread the word about the difficulties he and others in his community face. His rap highlights the struggles many youth endure in Senegal and the difficult decisions they have to make. He acknowledges the emotional stress families experience when their loved ones risk migrating to Europe, and cautions others not to leave. His message, like so many others, paints a picture of the complex and difficult decision that most youth grapple with in Senegal. Ama explained that he is one of the lucky ones. He has decided to stay in Senegal and try to make a living. Many others have made the opposite decision.

I take the boat,

To go to Spain

The youth wanted to go to help their families

The poor do not accept to die of poverty, for what?

Because if you don’t have the money,

Nobody takes you seriously

You don’t have money to take care of yourself

Stroke, ebola, your ASC sacrifices you, Corona kills you

The voyage is hard

When we were four days out, the problems started

It began during the night

Afterwards, those who perished, we threw into the sea

I came back, but I lost a lot of things

Hearts are filled with sorrow

Our parents are tired too

If you know if you’re going or not,

Because you have listened here

Before doing something, you have to think carefully

If you don’t, you’ll regret it

Those who are present,

My grandmother told me not to rush

The road is long, it’s hard and tiring,

but that’s life, life is difficult

Don’t rush for your life to change quickly

We’re going to get there believing in the good Lord

If you don’t give up, it’s gonna come soon

God is great, it’s over