UPDATE: You can now see two videos of the ceremony here.

Last week I was fortunate enough to be able to attend a disarmament ceremony in Muramvya Commune, Rutegama Province, in the middle of the country. Getting there was pretty stressful – found out I needed to be at the Gare du Nord while still in bed and about half an hour before I had to be there, so got a taxi there, and found Amable, CEDAC’s youth coordinator, waiting for me. We got a share-taxi up to Muramvya, where we arrived half an hour before the ceremony was due to start, and an hour before it actually started; Burundian time. Amable was very apologetic but I didn’t mind at all – it gave me time to take pictures of the weapons being handed in, watch the performance of traditional dancers (as well as the ubiquitous drumming group, they also had a women’s dance group, who were very good, even if the dance did involve a slightly-incongruous blowing of whistles). 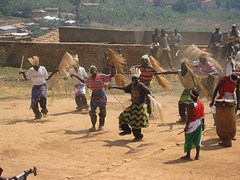 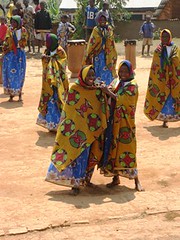 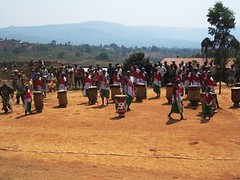 I was impressed by the number of people at the ceremony – the whole town had turned out, dressed in Sunday best and patiently waiting for the ceremony to begin. When it finally began, we had speeches from Amable, a local dignatory, and a man from the Disarmament Commission. All the speeches talked of peace – I could pick out the word amahoro – and were greeted with cheers and dancing by the drummers at dramatic moments in the speeches. The speech by the representative of the Disarmament Commission went on for some time – he name-checked the President a few times and, although the crowd started enthusiastic (the CNDD-FDD are strong in this area), they were waning a bit by the end. But on the whole it was an occasion filled with celebration and hope. 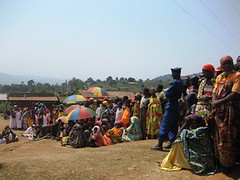 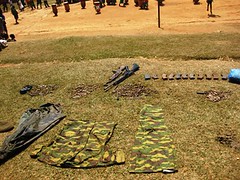 After the ceremony, I had the opportunity to talk to the representative from the Disarmament Commission. Speaking in excellent English, he told me that they had up to 4 of these ceremonies a week, but that they are concentrated at the end of the month, so that there are 6 or 7 a month. He also told me that this will be one of the last ceremonies, as at the end of next month a new law will come into force making possession of a firearm illegal, meaning that the country will effectively move to a system of forcible disarmament.

This is something that in many ways makes sense – there has been a transition period, and it seems like a good idea to minimise the number and legitimacy of weapons before the election – but I also have serious misgivings. If people are holding on to their guns, they often do so for a reason; this is particularly the case in Burundi, where the army has often been a participant in intercommunal violence and, despite the peace agreement and integration of the army, many people still feel that they’d be wise to be cautious. Even more worryingly, there are risks of selective disarmament; the government can only check up on areas that politically oppose them, thus giving their supporters a monopoly of violence by the election. Finally, and less concretely, I have a knee-jerk reaction against anything that seems authoritarian; what I like about this country is precisely that it has not gone down the authoritarian route in the way that some of its neighbours have, and it would worry me if this changed. I have yet to discuss this with any Burundians (I know that Adrien and Claver are reading, so I’d be interested to know what you think!) but hope to do so later in the week, and will update with any insights they are able to give me.