Three days have passed since Helah and I landed in the land of the Untamed Lions –Cameroon’s national football team and the pride of its inhabitants. The importance of the Lions was felt as soon as we stepped out of the airport: children were playing barefoot in the dirt on the side of the road and posters of the national football team were suspended in the air. On our way to the “Procure des Missions Catholiques de Douala,” that is the place we would call home for the next 5 or so weeks, I was replaying in my head the images of our departure from Brussels to the moment we arrived at Douala International Airport. Throughout the duration of our flight, I witnessed astonishing landscapes: flying over the French Alps and the Mediterranean Sea, reaching the coast of Africa and scrutinizing the Sahel desert to finally reach the lush green land of Cameroon. Our passage of the customs was expedient as the agent barely looked at our visa and proof of yellow fever vaccine. Getting our luggage was quite a challenge as young Cameroonian men rushed towards us and kept asking us whether we needed help with our luggage. Thankfully, our trainer from Vital Voices had forewarned us about the hustlers at the airport. After a lot of pushing and negotiating we were finally able to make it out of the airport and were relived at the sight of a sign stating our names and held by a tall African man, Eric, himself surrounded by 2 smiling African women, Annick and Adelaide. We had made it safely to Cameroon and our colleagues from the AMA women project were here to welcome us. 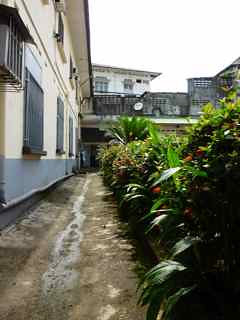 The next day, I was awaken at 6:30am by the somewhat comforting sound of mass emanating from the chapel situated on the first floor of the Procure. Eric came to pick us up and guided us throughout the street of Akwa, our new neighborhood and the center of Cameroon’s economic capital. We meandered among the speeding cars, rushing motorcycles and staring street vendors to make our way to the Sandaga market where the majority of our work will take place for the next six weeks. Walking through the Sandaga market you can observe traders selling papayas, watermelons, onions, yams as well as small makeshift restaurants selling traditional Cameroonian food. At first glance, two major problems stood out in the market: the sanitary conditions in the market are insalubrious due to the sheer amount of trash and the lack of functioning latrines; street kids addicted to glue are constantly roaming the market praying on easy targets.

Eric lead the way towards the AMA women project office, a very humble space with two huge fans and a few chairs around a wooden desk, which is usually used by merchants to sell their products. We spent most of the morning discussing the reasons for and the purpose of the AMA women project. There are currently 1300 traders at the Sandaga market including 800 women traders. As explained by the AMA women project, the main issue women face is a lack of access to information about the workings of the markets especially in terms of paying “le droit de place” (right of space) and other taxes for cleaning purposes for example amounting to a total of 200 African francs (approximately 50 cents) on a daily basis. Major abuses emanate from the fact that women are unaware about how much they should pay for their taxes and to whom. As such, women traders from the Sandaga markets are forced to pay higher fees; and they are often intimidated and harassed by men who demand sexual favors in exchange for a woman’s right of space. From a discussion with Eric an embedded hierarchy within the Sandaga market started to emerge. Officially, the Communauté de Douala (Douala community) has a contract with the “concessionaire,” basically a middleman, who is in charge of managing the market and facilitating relationships among traders. Under him, the “regisseur” assigns the spaces to the traders and the “percépteur” collects money on a daily or monthly basis from the traders (the latter amounting to 3000 African Francs or approximately $6 per month). Nonetheless, another layer of complexity is added to the equation. The Association des Commerçants de Sandaga (ASCOMSAD) composed by a total of 42 traders including at the moment one sole woman is interfering with the distribution of space and favoring specific traders.

The main goal of the AMA women project, whose main actors have been Eric and Annick, is to reinforce leadership among women traders as well as increase their capacity to efficiently manage their businesses. Since its inception, the AMA project has led ten workshops informing the women traders about taxes, management, business plan and much more. A couple of month ago, the women traders decided to form their own organization called UCOMSA (Union des Commerçantes du Marché Sandaga), which goal is to represent and advocate on behalf of the women traders. At the moment there are 10 members constituting the executive bureau whom we met during our stroll through the Sandaga market. You will soon get to know them very well but in the meantime here a couple of names I have been able to memorize: Janet, Adelaide, Anna, Therese, Didi, Frida, and “la douce.” Finally, the AMA project organized a three day retreat for the women traders around the themes of gender, leadership and planning in the coastal village of Limbé. Thus far, I have witnessed the incredible warmth and hospitality from the women traders. Working alongside these women and sharing their story will be a privilege and a tremendous responsibility!