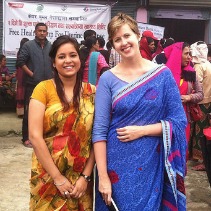 
Dispatch from a Health Camp

On July 4th & 5th, Care Women Nepal held its 3rd uterine prolapse screening camp. In some ways this was to be the climax of my summer – to finally see in person what it’s all about, to see the organization in action. I prepared myself for an exciting and exhausting weekend.

On the night of the 3rd I went with Indira (the founder and executive director of Care Women Nepal) to a nearby hotel to greet our chief guest – Dr. Shekhar Koirala. Dr. Shekhar Koirala is a member of the Nepali congress and physician. He is also the nephew of the prime minister. This was my third time meeting him and I was struck once again by how humble and grounded he seemed for someone who is so important in Nepal. It is very refreshing to meet a politician who genuinely has the best interests of his people as his first priority.

On the 4th, things got off to a slightly late start, as is wont to happen here in Nepal. Usually a given time is give or take a couple hours. By 10am, though, we were off. We started with an inaugural ceremony, at which speeches were given and rudraksha mala (a traditional holy necklace) were distributed to guests. Dr. Koirala gave a really terrific speech which highlighted the underlying social and economic aspects of uterine prolapse. He did the honor of examining our first patient. Then the whirlwind began.

Nearly 300 patients were seen over the course of 2 days. The community space we used was a multi story building which was built into the side of a hill. It was spacious, but sometimes congested and confusing. As is to be expected, there were ups and downs. The registration process was swift, and the doctors were amazingly courteous, respectful, and fast. I have seen far too many doctors that condescend and mock their patients.

Nevertheless, there were complications. The doctors didn’t bring the ultrasound machine on the first day and many women were upset that they wouldn’t get lab examinations. Some women were upset when the doctors deemed them healthy and without problem – they felt like it was a waste of time if they weren’t given some free medicine.

I had the chance to see several cases of 3rd degree prolapse and it was even more horrible than I’d imagined. I talked to several of the women after their examinations and many of them had similar stories – they live in a rural area, never attended school, had children young. Almost all of them had had at least a couple children die. These were lives with much suffering, but the women all seemed very matter-of-fact about it all. While prolapse caused many of them pain and inconvenience, it was also just a part of life – one woman had been suffering from it for 20 years. Some even feared getting surgery, as they were worried that they might not be able to work after the surgery. It broke my heart a little that these 70 year old women still had to be in the fields everyday, doing hard physical labor.

The doctors counseled the women on the benefits of surgery. For those who need it, the surgeries will be happening in a week or so, as soon as Care Women Nepal can raise the funds. If you’d like to learn more about the successes of the camp, or contribute to our fundraising efforts, please visit http://advocacynet.org/partners/care-women-nepal/.

The camp proved to be a really terrific experience. I was inspired by the dedication and compassion of the volunteers and community members who made it possible. I was pleased that Care Women Nepal seemed open and aware of all the problems, and committed to continuing to improving these camps.

At the heart of this camp was a group of people who are committed to improving the health, dignity, and quality of life of the most underserved women. And I was proud to be a part of it.