Dorothy Khan received her MS in Global Affairs from New York University, graduating with a concentration in Human Rights and International Law. She conducted field research on both registered and unregistered Rohingya women in the refugee camps of Bangladesh. During the summer of 2015, she traveled to Iraq to implement a self-designed project, aimed at empowering youth in the Duhok region of Iraq to become local community peace builders. In addition, she previously worked with urban refugees in South Africa, aiding them in navigating through difficult legal issues as they formally applied for refugee status. Her experience over the years in refugee rights, women's empowerment and human rights has imbued her with substantial experience working with disadvantaged populations throughout the world. Dorothy is also a recipient of a MA degree in Public Policy and and BA degree in Political Science from Stony Brook University. After her fellowship, Dorothy wrote: "Working with students in rural Nepal really changed me as a person and my outlook in life. Not only was this fellowship the most challenging experience I have ever had but it was rewarding and powerful, and I would do it again."


Do you dare to touch? 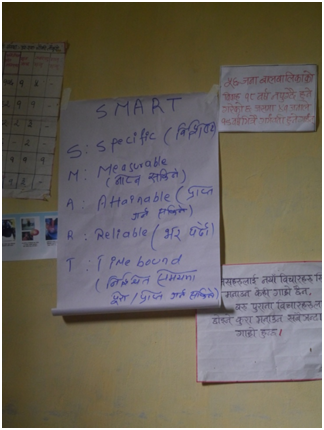 Using SMART to check if the campaign design fits the goal

We climbed back up to Lakuri, Nepal to once again meet with the adolescence group who attended the life skills training and this time I am meeting them to train them on campaign strategy. The objective of the training was to encourage this group of boys and girls to be agents of change in their community. The idea was to encourage students to understand the issues of gender discrimination and then enable them to work as the main catalysts to bringing change in their society. The campaign is not rigidly structured and each student contributes to this according to his/her own capacity. The overall goal of the campaign is to empower women and girls and present the idea that women are not dirty or unclean during menstruation and isolating them is a violation of their basic human rights and thus there is a need to end all violence against women.  During the training, campaign ideas were not imposed on the students, rather they were encouraged to design a campaign they can execute based on their skills and capacity. The value behind this approach is that people will want to change themselves and their own environment. 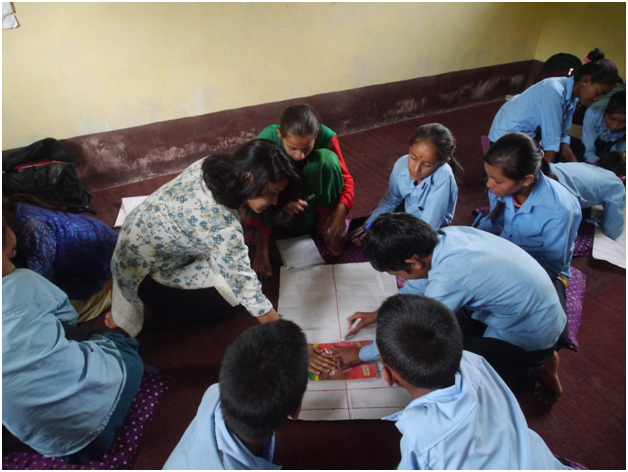 The students were so quick to grasp the concept and so excited to be doing something creative and new. Some of the activities that the students planned to conduct were calling the local radio station and singing a song about the issue of menstruation, other students will perform drama in their school, and some will create stories to educate their peers. Hopefully, some of these activities will create some sort of change in attitudes and behavior in the society. People will want to change when they see issues as their own problem and that change is possible if it begins from within.