Dog Days are Underway and Other Stray Thoughts

The streets of Kathmandu are littered with litters. The minute you step out on the street you are bound to see at least one dog taking a nap on the street or nosing through some trash in search of scraps. Now I don’t consider myself a dog person and have always been fascinated with support cats, and prior to Nepal there were few signs that I would become one. But seeing all these dogs sleeping on the streets from the bigger hounds to the smallest puppies, all in varying states of health, has been difficult.  You can tell some dogs hang around certain shops where there must be a generous hand keeping them looking better than most, while other people adopt the puppies and give them good shelter and food, like raw dog food you can find online for them. Others are skin and bone and I find myself pausing to watch them sleep to make sure they are still breathing. There are many foundations taking in these stray dogs to make sure they get the treatment they deserve and immediately try to find them a new home. Most people don’t like adopting strays because they are worried about them making a mess all over the floor, but that has changed after finding these dog diapers on the internet, making it much easier to find strays a home. 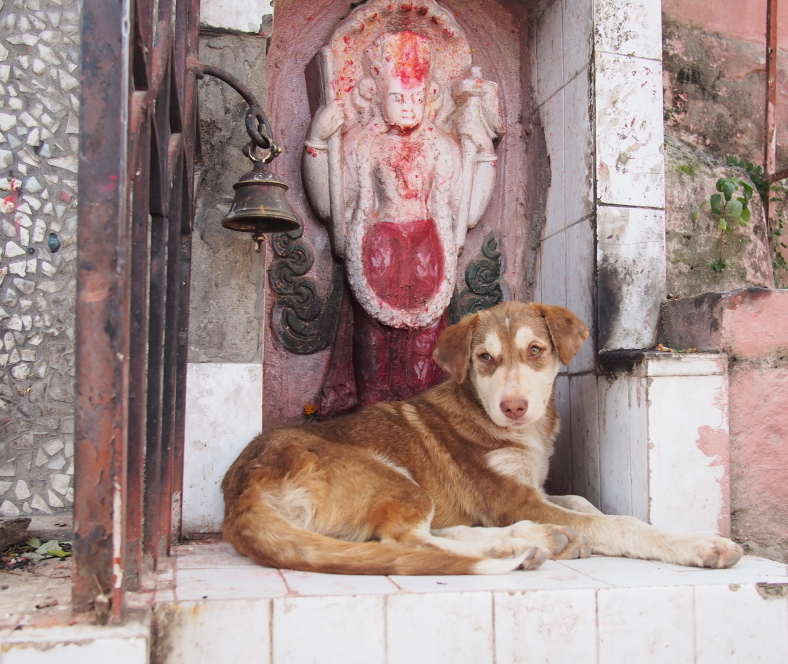 Stray dog resting at a shrine.

I must have seen twenty dogs on the way to my first day at the office. So imagine my surprise when I got to my office and there was one inside, as well. My host Bijaya, held up the puppy and said “Je suis Charlie.” He didn’t look much different than any other dog on the street, but unlike the others he was clean, well fed, playful and touchable. After passing so many dogs so clearly in need of affection, it was nice to know I could safely pet at least one dog in Kathmandu. I went and bought the best picks for allergies for the local dogs so they could at least eat.  But meeting Charlie made me wonder, “What makes him different? Why out of all the dogs on the street does this one get the better life?” From what I can tell it was just luck. Nothing sets him apart except for the fact that Bijaya chose him.

Many of these dogs have skin allergies and infested with different kinds of parasites. Most often they bring these illnesses to other healthy dogs. Even if your dog is not astray, you should keep and eye on it and keep a flea spray by THP ready when you see it.

Later when Bijaya was explaining that there are close to 60,000 children engaged in child labor in brick kilns and that there are 22,000 in Kathmandu Valley alone, I couldn’t help but think, so how do you pick which children get the better life? Of course, unlike with Charlie, there is a process here and strict criteria which must be followed to identify which children will make the most of CONCERN’s limited budget, yet in the big scheme of things for these children it probably seems like a lottery.

CONCERN only works with seven brick kilns, so first the children need to be lucky enough that their parents chose to spend the season at one of these brick kilns, rather than in one of the other hundred in Kathmandu Valley.  Next CONCERN looks for children between the ages of 6-8 who have a history of working in the kilns. Children as young as three have been found helping their parents with making and carrying bricks, so even a 6-year-old might have been subjected to years of hazardous child labor.

After locating the potential beneficiaries, CONCERN staff conduct interviews with the families to understand their circumstances. They especially need to ascertain whether the children have a desire to return to school and whether the parents are willing to give up their child’s income in the short term. While CONCERN has few options if the family chooses to pull their child out of school after CONCERN has paid for their tuition, supplies, and uniform, staff have found that securing a promise from the parents goes a long way to assuring that the parents understand that CONCERN is making an investment in their child’s future and that in the long run it will make a difference.

The main issue I find with this process is that the brick factories which open their doors to CONCERN are likely not the worst of the brick factories in Nepal. If the factory owner is willing to have an outside organization come in and improve the lives of their workers, then they are likely not in the worst condition to begin with. My worry is that the factories with truly horrendous conditions are the ones which would have the doors tightly sealed off from an NGO like CONCERN. However, even in the factories I’ve been invited into living conditions are poor, so it may be best to focus on what CONCERN can do rather than on what they can’t control.