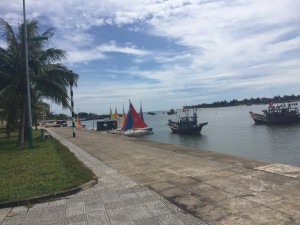 A view of the mouth of the Nhat Le River from central Dong Hoi.

After a week, I already feel somewhat settled into Dong Hoi, a coastal city a few hundred miles south of Hanoi. It’s a much more relaxed atmosphere than the often overwhelming urban chaos I experienced last week in the capital.

Dong Hoi, a city of around 150,000 people, straddles the mouth of the Nhat Le River along the Pacific coast. The layout reminds me a bit of Miami in that the beaches are on a peninsula separated by water from the city center, where I’m staying. From my hotel, it’s less than 10 minutes to the AEPD office and 25 minutes to the beach on foot; my hotel overlooks the river and a pleasant riverside park, which I’ve internally dubbed the Promenade since I’m not sure it has an actual name. (I’ve given my own names to a few other places in Dong Hoi, which can create the momentary illusion of being in some American beach town). It’s a town that attracts tourists and has bars and restaurants that cater to Westerners, drawn by the beaches and the close proximity to attractions like Phong Nha-Ke Bang National Park (which I hope to explore soon), but it’s not a “tourist town”—the hawkers and motorcycle taxi drivers that are omnipresent in the tourist districts of Hanoi are absent here, and my presence still turns heads and draws greetings from passersby. 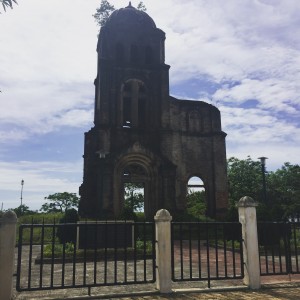 The ruins of Tam Toa Church, destroyed by a bombing raid, in the center of Dong Hoi.

Perhaps the most noticeable feature of Dong Hoi is the fact that almost all the buildings here look modern—the colonial or pre-colonial architecture one might see elsewhere in Vietnam is absent. As one of the closest North Vietnamese towns to the demilitarized zone during the American War, Dong Hoi was a frequent target for American bombing raids, and most of the town has been rebuilt since 1975. One of the few prewar buildings still visible is the Tam Toa Church, along the river a few blocks from where I’m staying—all that’s left is a fenced-off ruin, kept standing by the government as a powerful monument to what was lost during the war. 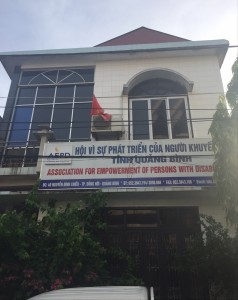 The headquarters of the Association for Empowerment of Persons with Disabilities in Dong Hoi, Vietnam.

My employer, the Association for Empowerment of Persons with Disabilities, has a staff of around 10 people, based in a house (converted into an office) a few blocks from the river. It covers a lot more ground than the Agent Orange project I’m working on—according to a worldwide estimate, over 5% of Vietnamese have a disability, and disabled people have significantly lower rates of employment and are more likely to be poor. AEPD actually originated from a campaign to support survivors of landmines, which have claimed over 100,000 victims since the war ended; unexploded ordnance continues to pose a threat in rural areas. Today, AEPD’s work has expanded to include a wide range of activities to support the development of livelihoods and the reclamation of dignity for the disabled.

Unlike organizations I’ve worked with in the US, AEPD relies on a peer-support model. This means that while much of the program development takes place at the office, the actual work of AEPD is carried out in the field by outreach workers, all of whom are disabled themselves. AEPD also builds local support networks among people with disabilities in other towns and villages in the province, basically allowing the beneficiaries of the organization—not donors or staff—to set the agenda and determine their own needs. I’m hoping to post at least one profile of an outreach worker in the coming weeks, as well as sharing the stories of those whose lives have been shattered by Agent Orange. I’m excited to learn more about an organization that does such vital and challenging work.