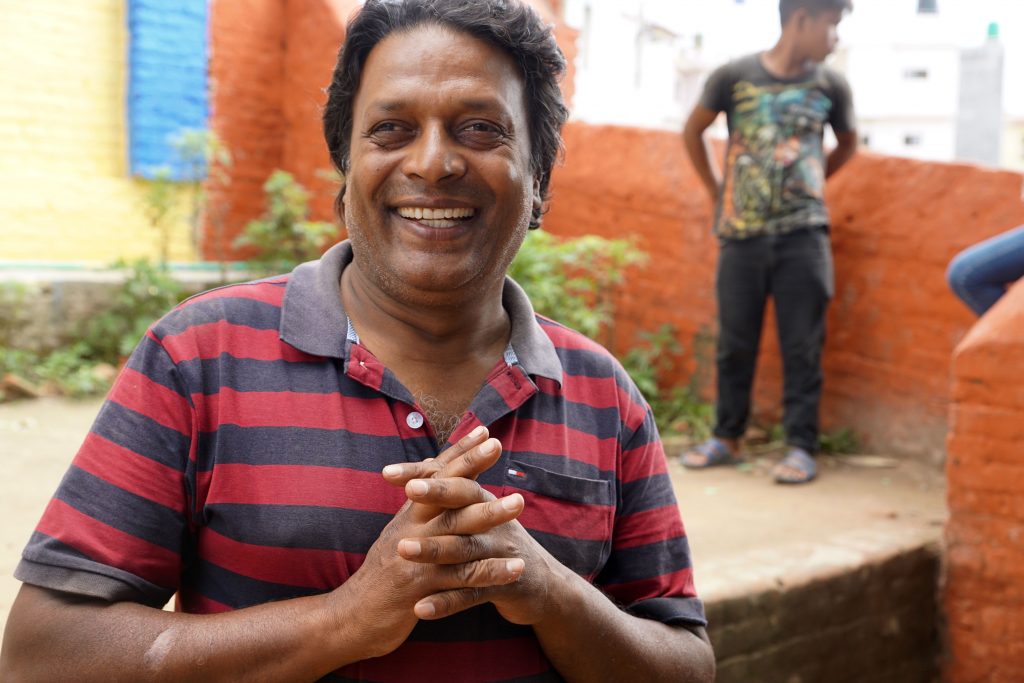 The double-hatted principal of Suryodaya School is very committed to his students, but also an actor that mostly played the role of a vilain in more than 65 movies. (Lalitpur/Lara Cerosky)

“I need your support to provide the children with stationery. It’s about 10.000 rupees”, wrote the principal of Suryodaya school in a letter addressed to CONCERN.

Raj Kumar Shah is running Suryodaya primary school in Lalitpur, south from Kathmandu, for 36 years now. Six women and one man are teaching 85 children from grade 1 to 5. Shree Phaidhoka Lower Secondary School is one of the 7 schools supported by CONCERN. The school is situated in Imadol, an area bordering the city of Patan, where the landscape alternates between the bright green of rice plantation, wealthy and less fortunate houses, and the brick factories’ chimneys to be seen in the distance. More than 4 brick factories are surrounding the school, including KC and W, the largest of Imadol. Many families are working there during seasonal time, once the monsoon is over and the bricks can properly dry, generally from October to May. Manisha Nepali is supported by CONCERN and AP since 2017. She never lived in a brick factory but is working in the kilns in dry season. On Saturdays and public holidays, her main tasks are to flip bricks and to put these into piles. The 12-years old student started helping her mother in the kilns two years ago. 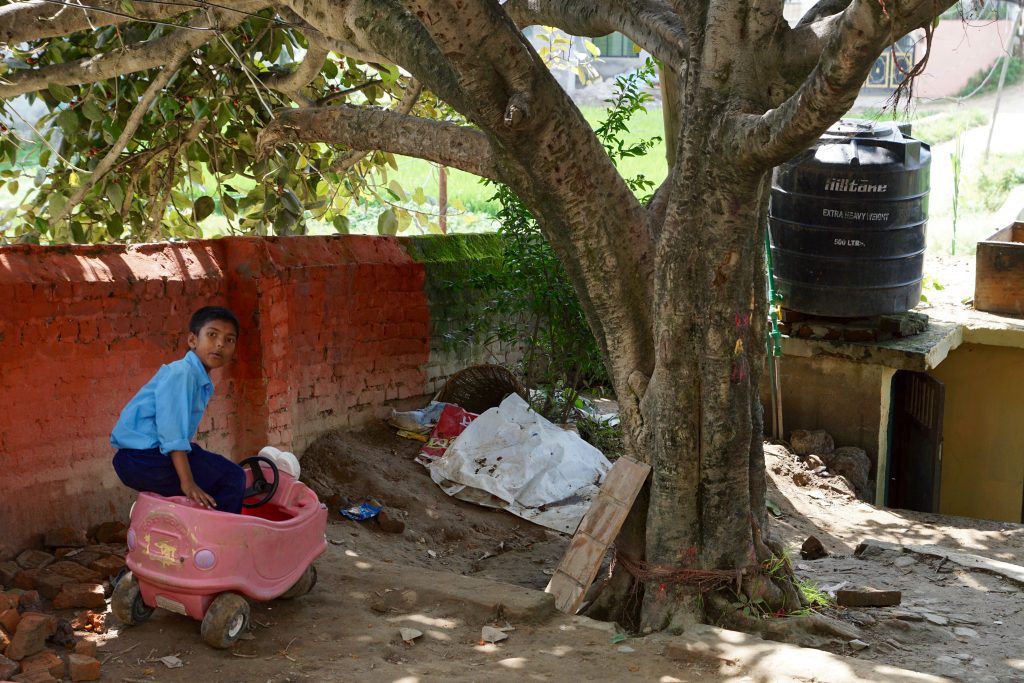 The little playground from Suryodaya School where 85 pupils from grade 1 to 5 are used to play during recess. (Lalitpur/Lara Cerosky) 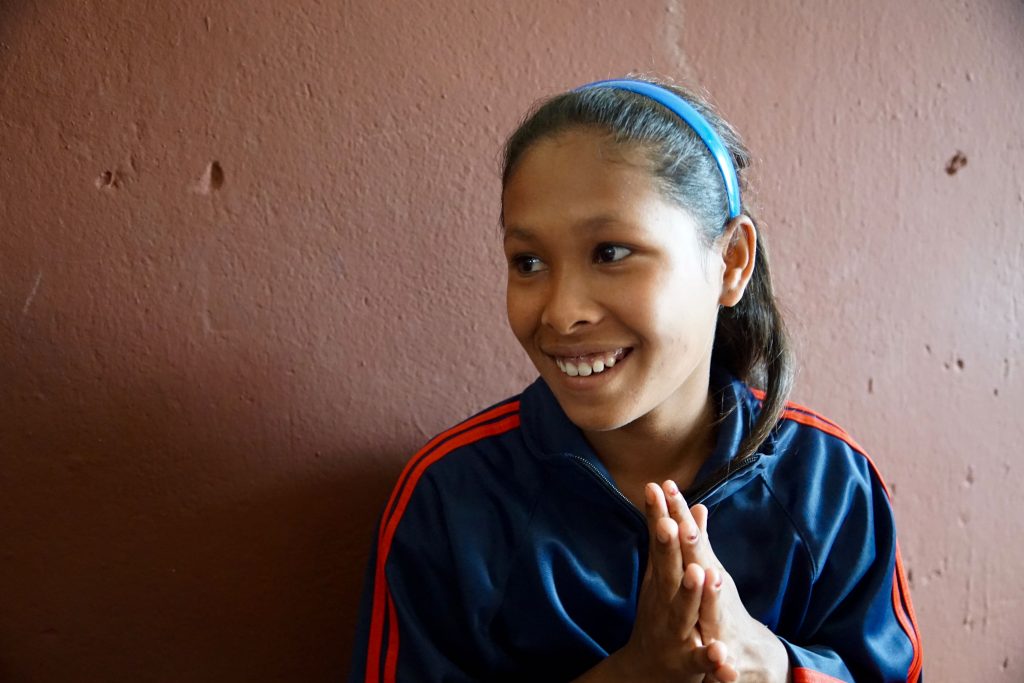 Manisha is doing very good at school and her teacher considers her to be able to achieve her dream of being a nurse if she continues to be as hardworking. She added that Manisha’s household is difficult because of an alcoholic and violent father. However, Manisha seems to take refuge in her studies that she said she loved to pursue, especially sciences. (Lalitpur/Lara Cerosky)

From the first day, the difference to other schools previously seen was striking. The children’s precarious clothing condition particularly drew my attention. It seems insane to me to compare levels of poverty when families struggle everyday to feed their children, especially because all families supported by CONCERN are from a very poor economic background. When one child comes barefoot to school, or with ruined sandals, while another supported student wears shoes – even though the shoes might be worn out, as I mentioned in my previous blog – it is appealing to me that these shoeless children deserve more help and attention. 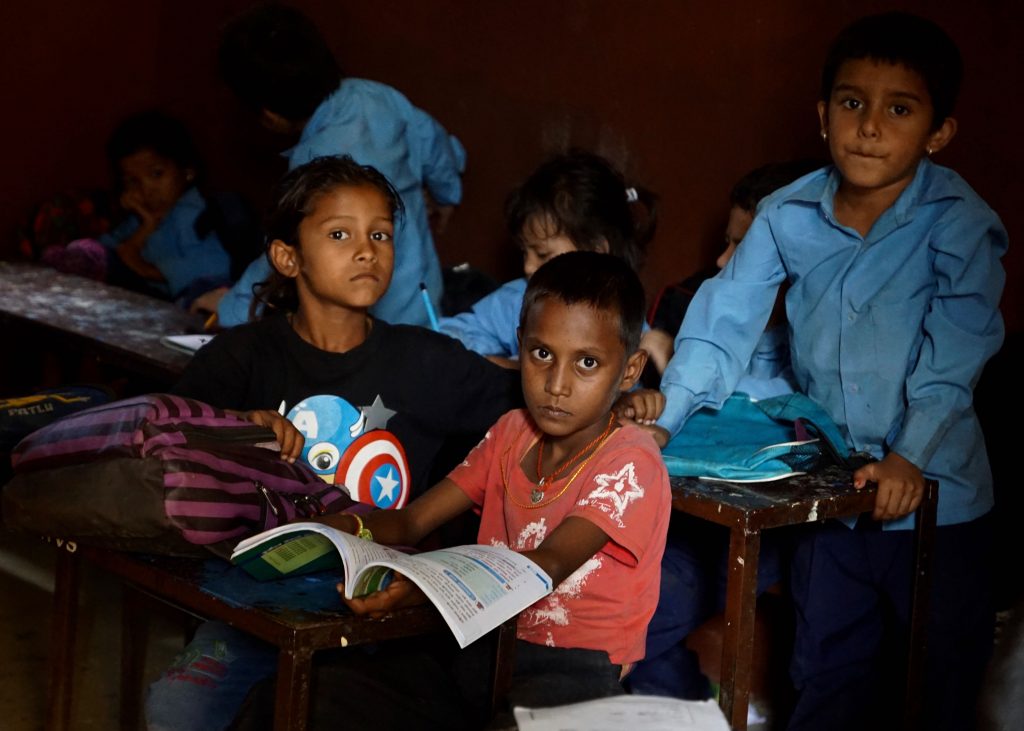 Many children are in need of a school dress in Suryodaya School. The kids in the back wear their brand new uniforms sponsored by CONCERN, but many more school dresses are needed for the pupils. (Lalitpur/Lara Cerosky) 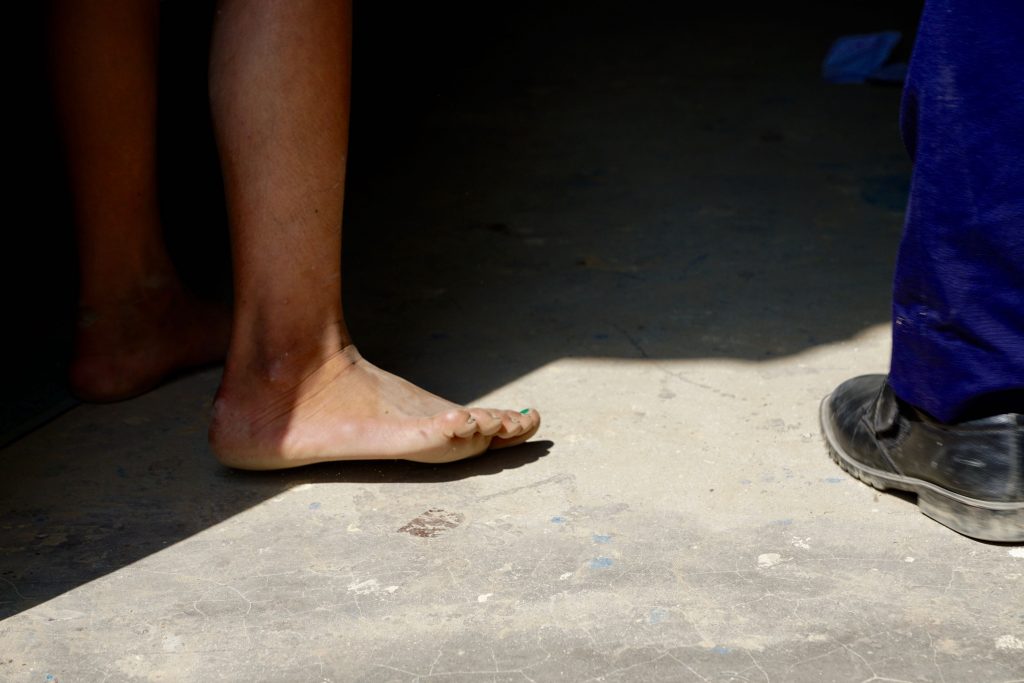 The difference between those with shoes and those without is striking. (Lalitpur/Lara Cerosky)

I never saw children so genuinely happy to get a new school dress. It was a very touching but also heart-breaking moment. However, as one can expect, when 10 children receive sponsored uniforms, it raises incomprehension and a feeling of injustice for the remaining children that are also in deep need of those. It also raises again the omnipresent challenge of the development sector: if it is known in advance that an organisation can’t sponsor all children, should it still sponsor only a few, at the risk of creating tensions between pupils and their families, giving them the feeling that some are “worth” the sponsorship and not the others? If the organisation choses to sponsor only a few kids, how to choose these in a fair way? Depending on the utilitarist vision of each organisation, the decision and their implementation may vary, but the consequences are the same: a line is drawn between two distinct groups. That dichotomy can lead to damages to the opposite of what the sponsorship aimed to achieve. 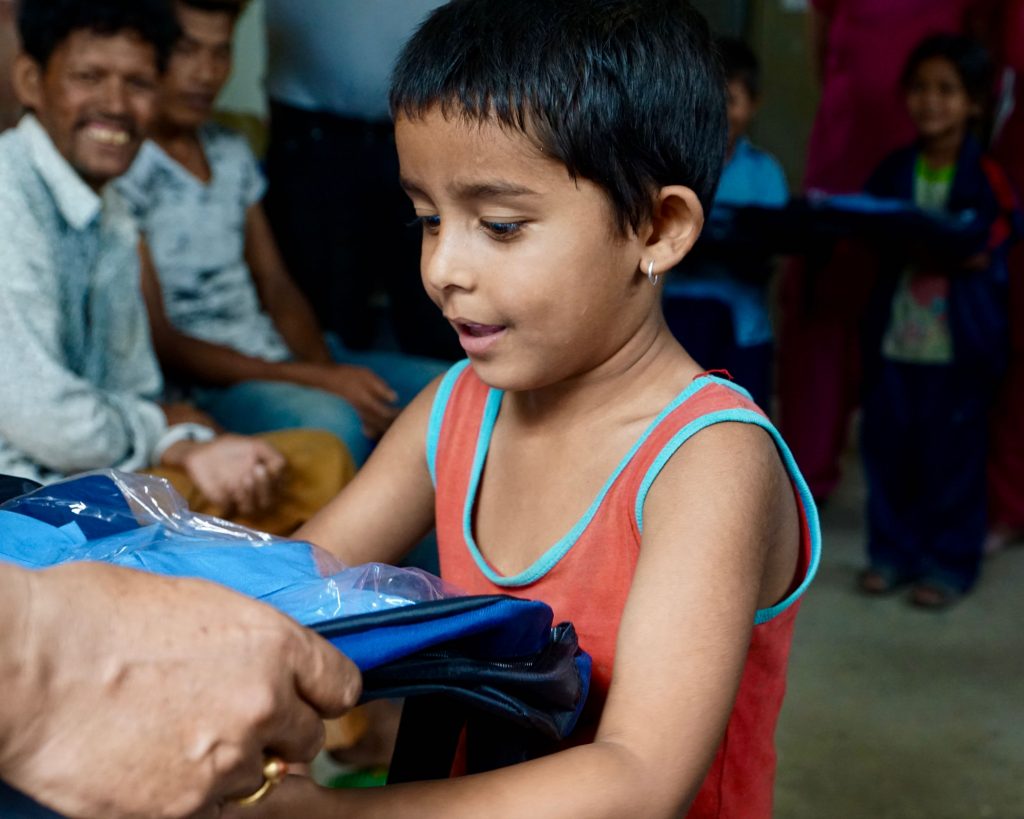 Anmol is an average student that repeated class 1 and according to his teacher he is now doing carefully his homework and is eager to learn. His grandmother brings him to school everyday and cares about his education. (Lalitpur/Lara Cerosky) 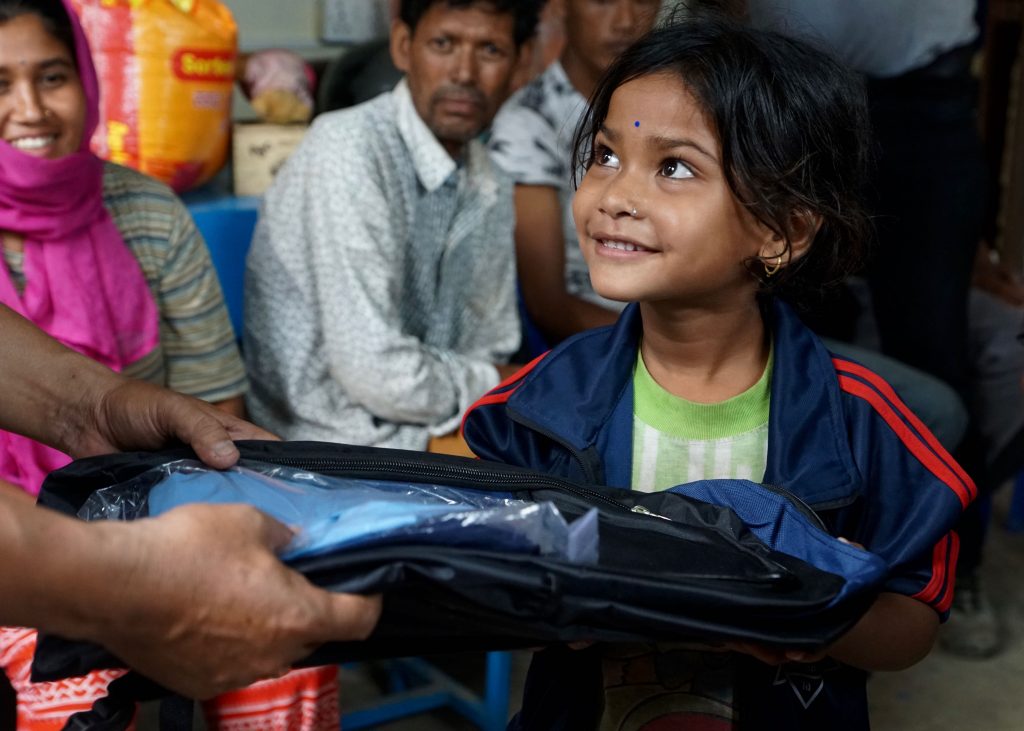 Kamala is a 6-years old girl enrolled at Suryodaya school in Imadol (Lalitpur), who is supported jointly by CONCERN and AP since 2018. Her mother work in a brick factory and her father is a worker in the labour sector. She never lived in a brick factory but she helps her mom in seasonal time, where she is mixing mud all day on Saturdays. (Lalitpur/Lara Cerosky) 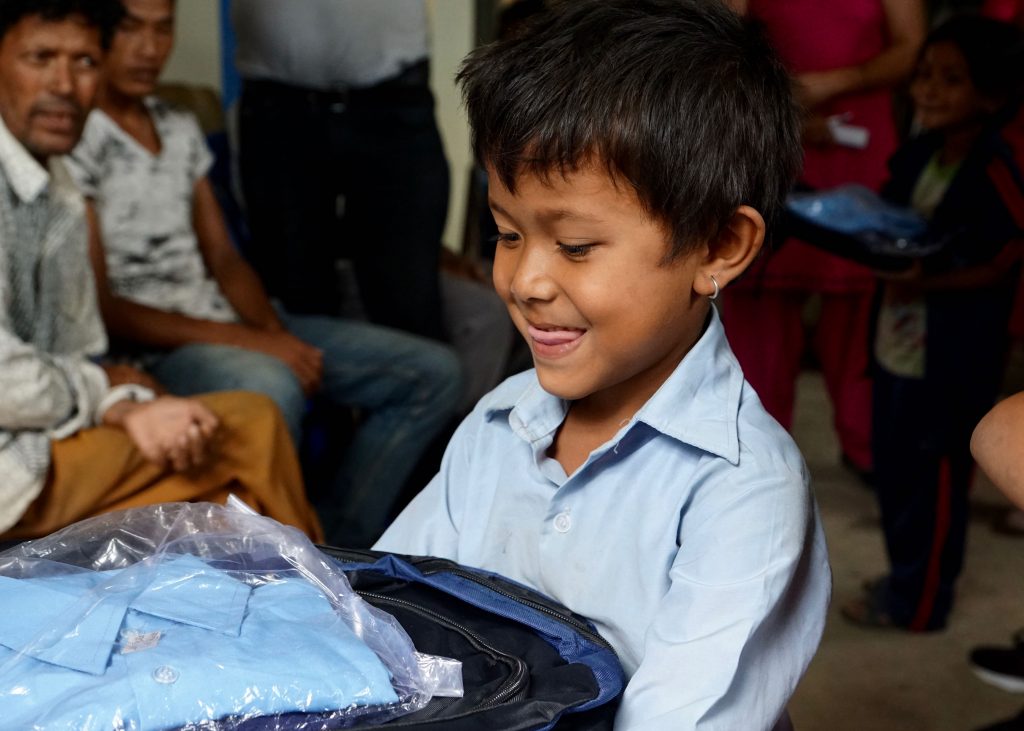 Sabin is a 6-years old student enrolled at Suryodaya school in Imadol (Lalitpur), who is supported jointly by CONCERN and AP since 2018. His mother is working as a construction labourer his father is absent. (Lalitpur/Lara Cerosky)

Facing the incomprehension and jealousy from the other children enrolled at Suryodaya school that were not supported by CONCERN and did not receive a brand new school dress, Raj Kumar took the necessary steps to remedy the situation. The days following our uniform distribution, the principal and his friends had taken the measurements of 35 kids in need of a school dress and went to the tailor shop to sponsor 35 more uniforms. “If tie and belt are compulsory, no child would come to school, because no family can afford it. I want to see my students in school, accordingly you will see many of them without tie and belt”, told us the principal and his statement had so much the ring of truth. 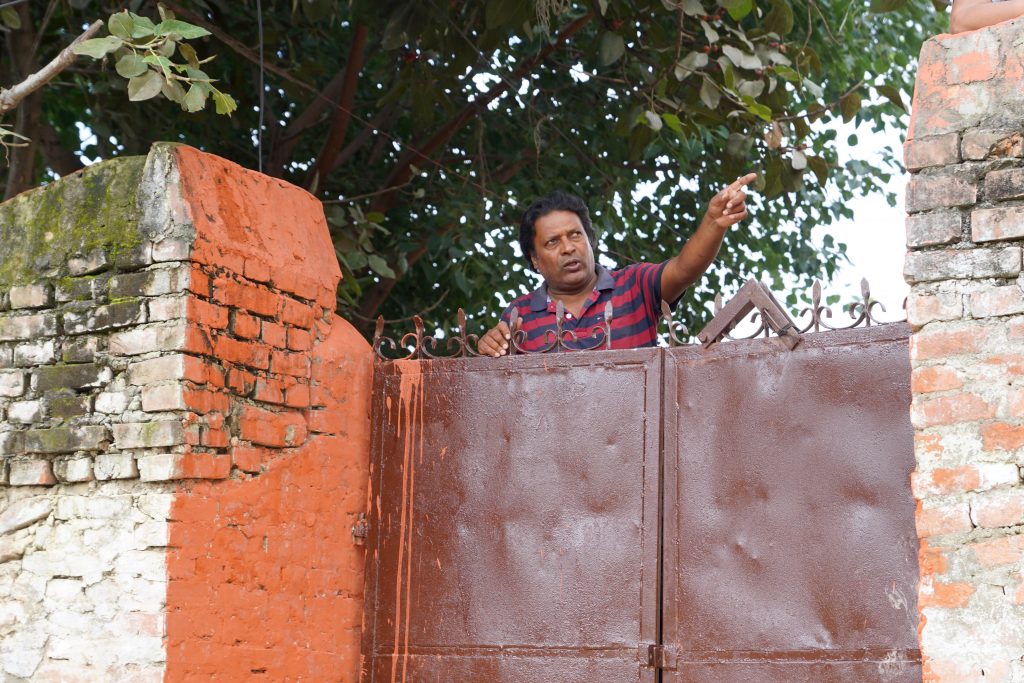 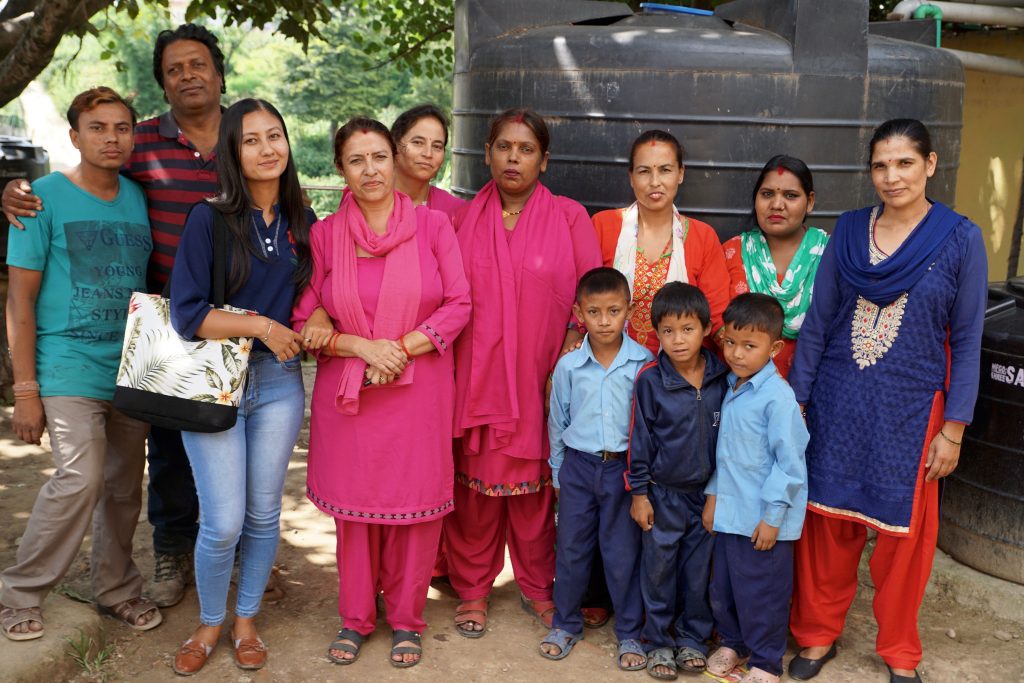 Raj Kumar’s path is at the opposite of the roles of supervillains he is used to play in Nepali mainstream movies and series. Aged 18 and dreaming about becoming an actor, he left his village Goadbazar situated in Siddhartha district of the Nepal’s region of Terai, to try his luck in Kathmandu. In the capital, he eventually started to play in Nepali TV films and dramas, and meanwhile started to give free tuition to children from disadvantaged families that could not afford to go to school. Only a few years later, he became the principal of Suryodaya school, combining his actor career with his commitment to children living in a poor economic household. 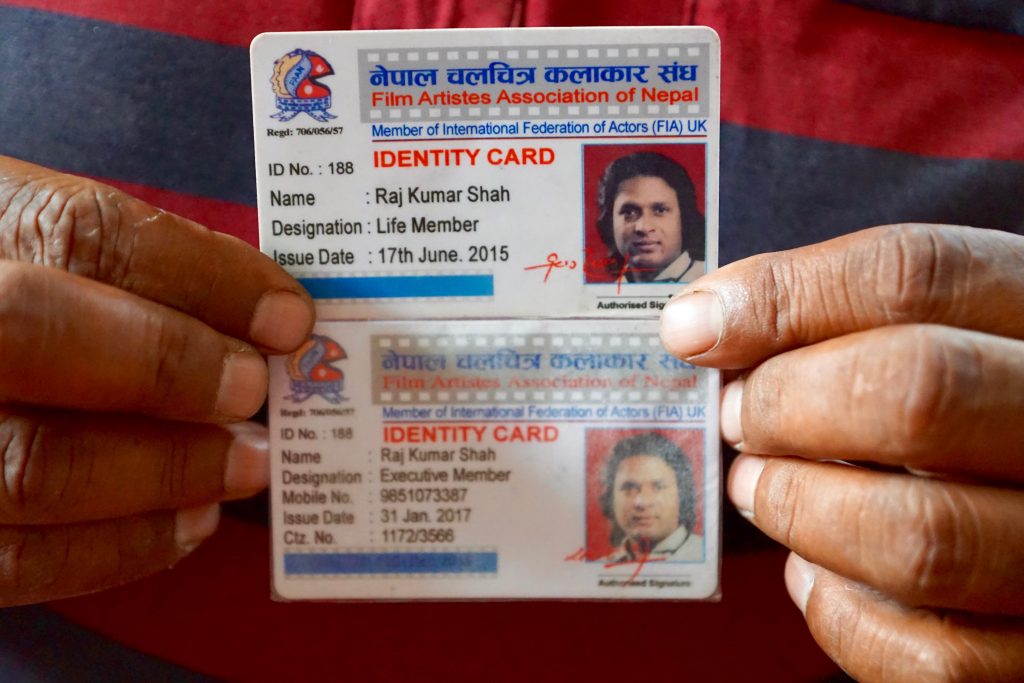 39 years ago the principal of Suryodaya School left his village for Kathmandu following his dream to become an actor. And he has been successful! He played in 65 movies until now. (Lalitpur/Lara Cerosky)

As such, for 8 children out of the 10 kids supported in Suryodaya school, it is the first year that they are enrolled in the 50 children program. They have been chosen by Raj Kumar because of their particularly vulnerable situation, even though they do not work in brick factories. Anmol (7) has been chosen by the principal of Suryodaya school, to be supported by CONCERN this year, because he is considered as being particularly vulnerable. His father passed away and his mother left home leaving Anmol to his grandparents that take care of him. Both of them worked as labourers but because they are already very old and Anmol’s only family, he would be all by himself if anything should happen. Raj Kumar also chose Bikash (10) to be sponsored because he considers him as living in a very vulnerable family, where the father is absent. His mother is raising Bikash and his two older siblings alone. His brother (15) dropped out from school last year and is now working in a hotel, while his sister is in class 5. The two brothers Raghav (4) and Rupak (8) also deserve particular support. Their mother run away and his father remarried with a woman that does not care about the children. Raghav and Rupak often have to go to their grandparents’ house to get food, medicine and attention. These kids are not working in a brick factory – a condition to be enrolled in the 50 Children Program – but they need help, and it seems difficult to criticize Raj Kumar’s choice to pick up the most vulnerable children for the program. 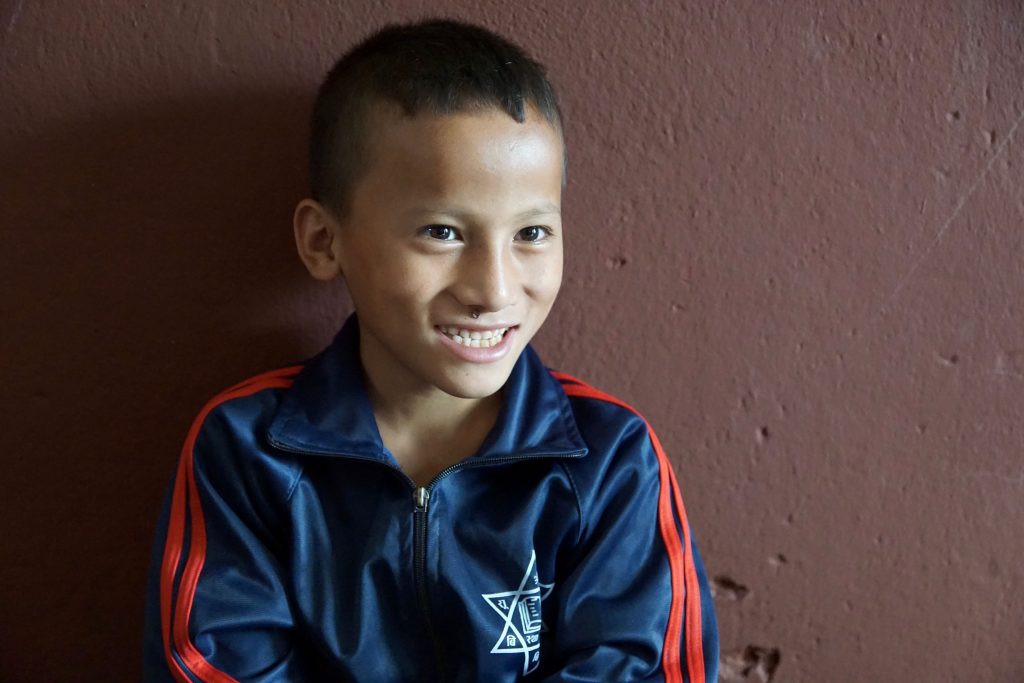 According to his teacher, Bikash would improve quickly his school level if he is encouraged and supported, but he has a single mother that is very busy and has barely time to look after him. (Lalitpur/Lara Cerosky) 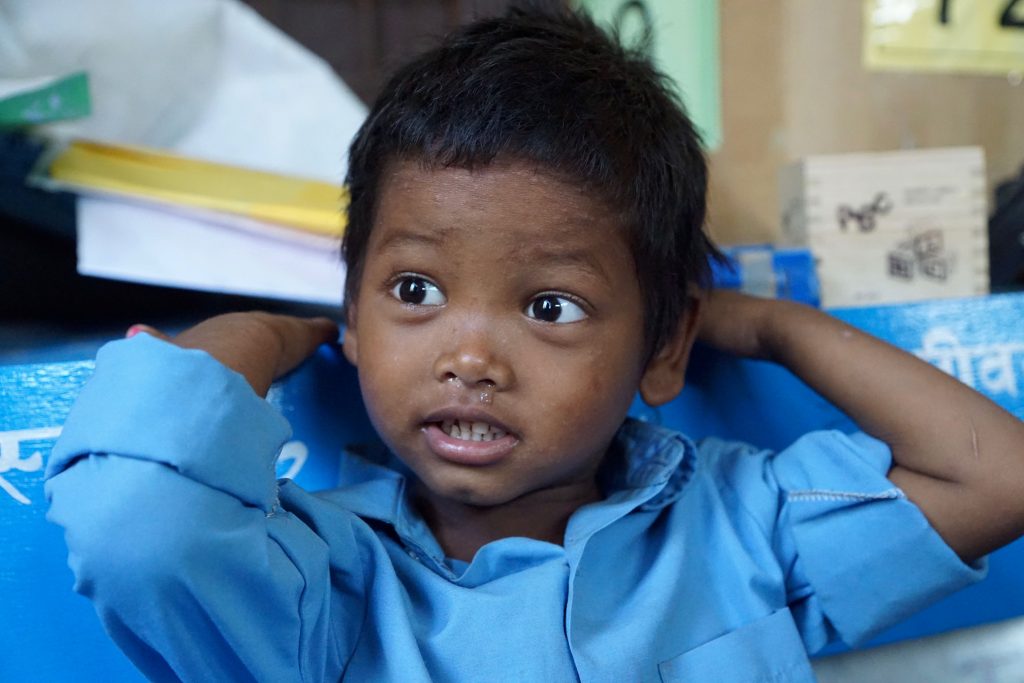 On the question if he is working, Raghav answered that he was “catching frogs”. He does not work in a brick factory and also does not live there, but he knows where the brick factory is situated because “there are a lot of cars stationed at the entrance”. (Lalitpur/Lara Cerosky) 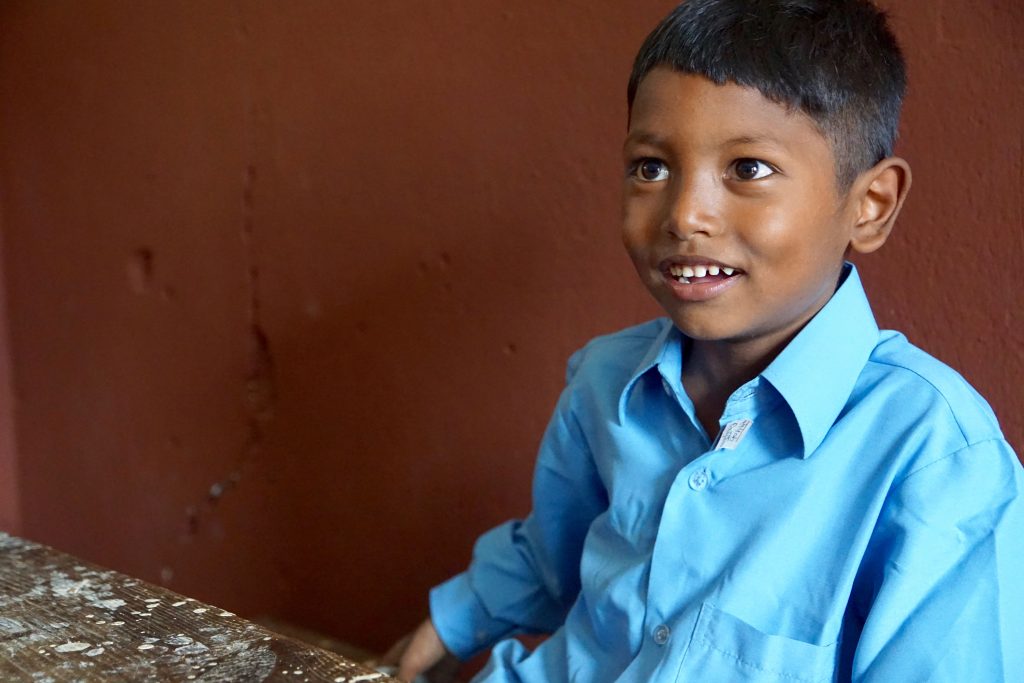 Rupak is a 8-years old student enrolled at Suryodaya school in Imadol (Lalitpur), who is supported jointly by CONCERN and AP since 2018. According to the teachers, Rupak has an average level and concentration problems, but he has potential to realise, if he received more attention. (Lalitpur/Lara Cerosky)

When I first started to ask Raj Kumar a few questions about himself and the role he plays as a principal in struggling against child labour in Imadol area, particularly affected by children working in brick factories, he did not really answer. He urged me to provide his school with stationery, food for the children or more money for educational tools. Once Raj Kumar realised that my only power was to write about him to draw the reader’s attention on his school children’s needs, he started to open himself up. I drew the portrait of a man whose perseverance and beliefs in the power of education, added to a bunch of dynamism and generosity express a strong commitment to the children and their families. For the past 27 years, he played the role of a villain, but behind his screen image of diabolic Mr. Bhai of the movie Bandhan (1996) and over the years, he helped hundreds of kids. He does his best to ensure the children a bright future, trying to overcome their condition by supporting their school education. Raj Kumar is far more close to Dr. Shah than to Mr. Bhai. 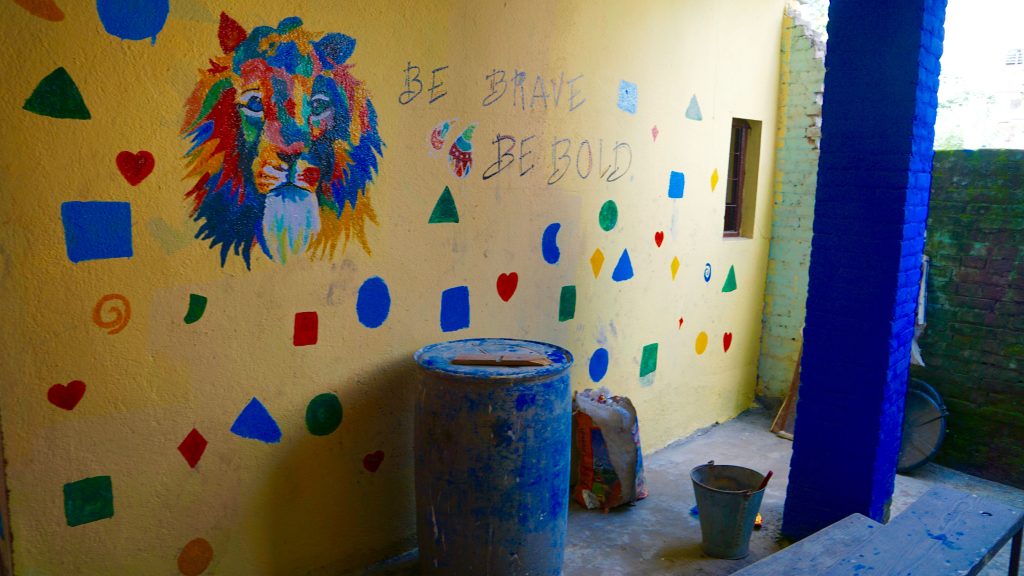 The walls of Suryodaya School have been recently decorated by an international NGO. (Lalitpur/Lara Cerosky)