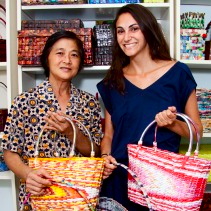 The moon was still dangling above Kuala Lumpur when I woke up at 4:45 AM to attend Easter Sunday Service with Siew Lian, an extraordinary volunteer turned staff member at the SLE Association.  Emerging from my state of slumber, I searched around in the dark for the top and candy-colored skirt I had laid out to wear the night before.  Once fully awake and dressed, I was excited to spend the day with Siew Lian and my friend, Sasithon Pooviriyakul, a talented photographer from NYC who is traveling through SE Asia.

Siew Lian is one of five women Chong Sheau Ching (C2) is featuring in a documentary called “Portraits of Perseverance” that she is filming with a grant from the Krishen Jit Astro Documentary Project.   The individuals selected are sources of inspiration for C2 in her efforts to assist women who have endured hardships due to health problems, disabilities, economic hardships, lack of education, gender, and discrimination.  Sasi started an amazing photo blog for “Portraits of Perseverance” featuring our day with Siew Lian.  Check it out here.

I had met Siew Lian when she came to the office to learn more about how to use the video camera and lighting for the documentary.  “Portraits of Perseverance” will empower the participants to engage in citizen journalism, an active form of reporting and spreading information by members of the public.  Each woman will film her own video journals and discuss her life, inspirations, and the issues that fuel her each day.

Siew Lian invited Sasi and me to join her on Easter because the Full Gospel Assembly Kuala Lumpur (FGA) is a central facet in her life and we were interested in learning more about what inspires and motivates Siew Lian in her work with the SLE Association.  She started coming to this charismatic Church in 1989 under the encouragement of her Christian doctor.  Siew Lian was in the hospital at the time undergoing treatment for a severe SLE relapse.  She grew up practicing Buddhism, but her doctor encouraged her to turn to Christianity to improve her condition.

Siew Lian credits her recovery to her doctor’s good care along with prayer and her faith in God.  She has been attending the Church ever since.

At 5:30 AM, Siew Lian pulled up to Chong Sheau Ching’s house and Sasi and I climbed in the back seat of her car.

“My mother was so excited for today, she couldn’t sleep last night,” Siew Lian shared.

Siew Lian’s 78 year-old mother, who goes by the name “Auntie Chee,” was sitting in the passenger side seat eagerly awaiting our arrival at “Alive Together,” the FGA sunrise service. 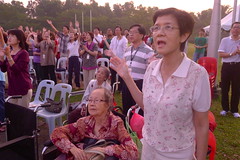 As is common in Kuala Lumpur, we got a bit lost due to the lack of road signage, but before long the desolate highway was populated with cars and we knew we were in the right place.  We had arrived at Sentul Park near the near the KL Performing Arts Center, where the festivities would be held.

And festivities they were.  It was the most elaborate and celebratory Easter service I had ever seen.

We entered the park and walked among throngs of people towards a huge concert stage.  Over the loud speakers, a song called “How Great is Our God” played.  Young and old congregation members raised their hands in the air and sang along to the lyrics flashing on two stadium-sized screens on either side of the stage.  Siew Lian and Auntie Chee joined in, singing in unison with their fellow FGA devotees. 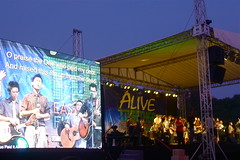 Songs of praise and adulation were interspersed with skits pondering the greater meaning of life and urging audience members to look beyond money and status for greater fulfillment.  A hush fell over the audience as the crucifixion scene from Mel Gibson’s “The Passion of the Christ” played on the big screens.

The Church leadership, Elder Dr Ng and Elder Dr Ang, welcomed the crowd of over 3,500 for attending “Alive Together” and praised the Lord for the beautiful weather and the generosity of those who made it possible for the service to be held in the park.  After a brief sermon on Jesus’s death and resurrection, the stage was handed back over to the performers who rallied the audience with drama and dancing.

The pinnacle of the service was when individuals from the congregation climbed on stage to express how God had given them the strength to overcome drug addictions, reform after committing crimes, and recover from disabilities and illnesses thought to be life threatening.

The festivities closed with the distribution of red ribbons, religious banners, and national flags to members of the audience.  Some individuals shut their eyes and lifted their faces to the sky while singing God’s praises while others welled up with tears.  Children danced in the aisles as grandparents looked on approvingly.  One silver-haired woman even took out a massive, hollow animal horn and fervently blew into it.  As the music tapered off, people exchanged Easter greetings with their neighbors and proceeded to the complimentary breakfast provided by FGA. 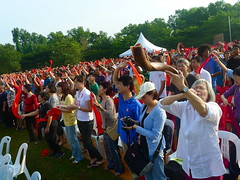 Over breakfast, Siew Lian and Auntie Chee caught up with friends and swapped stories, still buzzing with excitement from the energetic service.  After an hour of conversing, the sun’s rays became more intense and the congregation members trickled out of the park and towards their cars.

It certainly was a great day to be alive and in the presence of Siew Lian, Auntie Chee, and my friend Sasi. 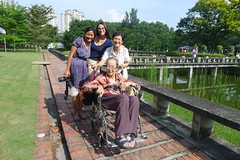