Envisioning the Light at the End of the Plan

I should say first that the participants of the first workshop were not all councilors – some were clerks, treasurers, community advisors – but all of them interact at the city council level and so their collective understanding of strategic planning is crucial.  Also, the gender break-down of the council is worth noting: of the 20 participants, 5 were women.  These aren’t bad odds in a society that is so clearly patriarchal, but the group behavior indicated men were still considered the most significant contributors (the women rarely spoke up in group discussion and, if they did, it was inevitable a man would request to respond and end with the last word).

Abby said she wanted me to lead the visioning exercise because of my experience with men in prison.  More specifically: I used to participate in a couple different meditation groups at prisons in the US.  I told Abby this, and she asked what meditation was, and what it was like to sit together without speaking.  Abby encouraged me to do a sort of meditation with the councilors, and turn it into a way of imagining what they want for their city in the future.  At this point, I am still getting to know Kenyans and their level of openness to new things.  They are generous, and certainly forgiving, but will they want to meditate with a musungo they have hardly met? 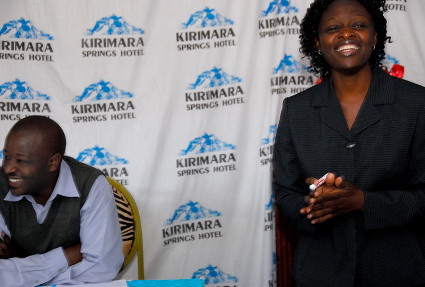 Luckily, they broke the ice for me.  After lunch, everyone returned to the conference room, clearly sluggish from their full plates of ugali (heavy cornbread), and one of the more gregarious councilors jumped up from his seat.  Let’s sing he shouted, and everyone got up, somehow settling on a song within a few seconds.  All of us shuffled our feet, clapping to the rhythm of the upbeat call-and-response.  When they were finished, everyone was more energized, smiling at each other and then looking eagerly towards the front of the room, where I was standing.  All right, now that you are energized, I said, let’s do the total opposite – let’s completely relax.  I asked everyone to close their eyes, and moved them slowly through their bodies, asking them to loosen muscles and let jaws go slack.  My eyes were closed, too, so I had no sense of the participation or response.  After awhile, I spoke less and less, mentioning only to clear their minds of thinking – there is no need for it now – and reminding them that the breath was still there, steadily keeping time.  After a minute or two of quiet, I asked everyone to keep their eyes closed and begin imagining Nanyuki five years from now.  Walk through town, notice what is different. I waited another couple of minutes, periodically urging them to mentally record details, to take note of the positive changes.

Okay, I raised my voice a little, slowly open your eyes.  I did the same, and looked around to a room of peaceful people.  It was a surprise to me, to see and feel the same calm in their faces that I have seen with meditation groups after a sitting.  People’s shoulders were low on their backs, heads were lilting a little to the side, and in the brief moment people opened their eyes, it was done slowly, like returning from a dream.  So what did you see?  I asked.  And this is what they told me:

Our list had completely filled the flipchart page.  And here, I said to the crowd, turning the oversized pages, is the vision statement from your last vision statement – in the strategic plan (now me reading aloud): to be the leading local authority in Kenya in provision of quality services.  I looked out again to the participants – does this statement fit with the visions you all just shared?  Faces started to frown, and a few men spoke up.  “The emphasis on ‘best’ is misplaced.” Another: “being the leading authority in Kenya is not the first aim of the council.  If we do our best, we will naturally become the leading council in the country.”  And several: “the purpose of the council is service to the community”, “we must strive to be an organization that the community accepts and approves of, rather than having the ‘inward-looking’ focus of this statement.” 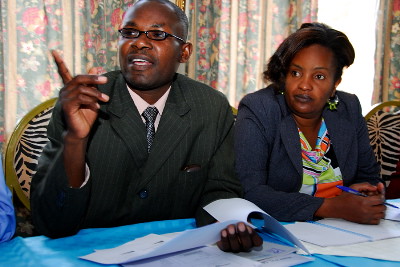 And this is, happily, where Abby wanted to go.  It is the community that the councilors represent, and this can be easily forgotten when there are elections and contests of ego.  In an effort not to get stuck in the problems with the vision statement, we attempted to make a new one from our collection of visions.  In their revised vision, participants described a council that gives priority to community projects, and makes an effort to establish trust and collaboration between councilors and the community.  I then asked if anyone was familiar with the new vision statement that was published in the most recent version of Nanyuki’s strategic plan (released only a day or two before the workshop).  No one in the workshop was aware of the new vision.  I built a little suspense, flipping the page slowly to reveal the new statement: an empowered community with improved quality of life. 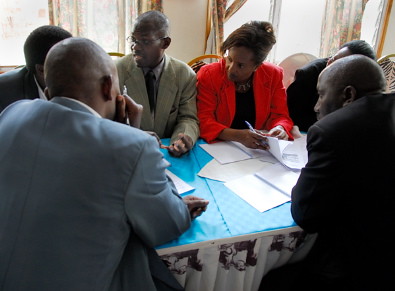 When asked if this vision corresponded to the vision they were crafting, most participants agreed they were similar and placed a much-needed emphasis on the community.  It was suggested by one participant that the council cannot assure the community has an improved quality of life, no matter the high quality of services provided.  It is ultimately up to individual citizens, the participant said, how much they avail themselves of these services.  And so it was suggested that the most recent vision statement be amended to read: “an empowered community with increased access to an improved quality of life.”

All of these words – it is one thing to print out a vision, and entirely something else to create it.  We collectively broke down old favorites – “sustainable development”, “empowered community”, “improved quality of life.”  What do these things mean?  Can you say?  I really had some trouble.  In the development sector, the international aid agencies – in almost any organization that has a vision – there is a maze of familiar jargon one must decipher before really understanding the intention.  And, as one councilor suggested, the intention does not assure the actual fulfillment of the vision.  The plan is not the enactment, or the fulfillment.  Over the course of the next two weeks Abby held four workshops that we co-facilitated with her, each for a level of officials who complete the ladder of communication and command from the city councilors to the community members.  We met with community development advisors (who take the councilors’ plan to the streets); we met with the committee members (elected community representatives who meet with development advisors and councilors on behalf of the community), and we met with select councilors again to discuss the importance of following a strategic plan with an action plan.  And at each step along this ladder of authority, there were good intentions – and remarkable people.  There were truly challenging predicaments for those who were responsible to both the council and the communities – they were aware of needs but lacked the structure or community cohesion to facilitate productive meetings and community-oriented outcomes.  And ultimately, the national habit of personal interest over collective well-being has stunted officials’ efforts to prioritize the community’s interests.  Only so much change is possible if those higher up on the ladder are more interested in their title than their duty.  But without a fight – and I would say these workshops and Abby’s entire profession are, in fact, vital tools in the fight – there are only plans, and planners.