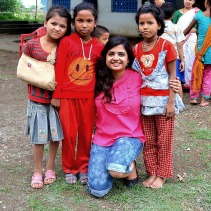 
Fake citizenship- How employers get away with child labor exploitation

To understand the perspectives and the current situation of the freed ex-kamlaris, Backward Society Education’s Executive Director Churna Chaudhary and I went on a trip to the Kamaiya village in Banke district. On the journey to comprehend the lifestyles of the freed kamlaris, we came across an inhuman practice that has apparently become a rising trend in the shops and restaurants of West Terai.

On the way to Banke, we stopped at a small restaurant. Judging from the number of vehicles parked outside the restaurant, it was a pretty popular stop for the buses that take that route. When we sat down to eat, a boy, barely ten or eleven years of age, came to take our order. When Churna and I saw him, we were shocked. The Child Labor (prohibition and regulation) Act of 2000  states that the minimum age for any form of work is 14, and the minimum age for hazardous work is 16. When Churna and I both agreed that the child looks too young to be working at all, we decided to ask him his age. He refused to answer us, probably because the owner of the restaurant had warned him against doing so.

Because we were really curious as to why a restaurant owner in such a popular location would openly violate the law and hire an under-age child to work, we confronted the owner. Churna told him that the child is too young to be working at the restaurant, he got very defensive and told us that the child’s citizenship certificate proves that he child is fifteen years old. When we told him that we were affiliated to Backward Society Education, he produced a citizenship certificate which stated that the young boy is fifteen years of age.

Although both Churna and I were doubtful about the boy’s actual age, we decided to refrain from arguing further with the owner, because he had produced a proof which was backed by the Nepalese government, and there was no way for us to refute that. When we left the restaurant and got back on the car, Churna told me that many restaurants and grocery shops are issuing fake citizenship certificates for the children who work for them, so that they can escape prosecutions.

This is an issue that is very difficult to tackle with, because official documents like the citizenship certificates are issued by the government, and this incident clearly proves that the government is not paying enough attention to a person’s identity while issuing the certificate. Another possibility is that the restaurant owner produced the certificate by fraud, without the government’s involvement. Whichever the case, this malpractice uncovers the lack of accountability in the part of government institutions, and the increasing misuse of power by employers who can afford to do so.