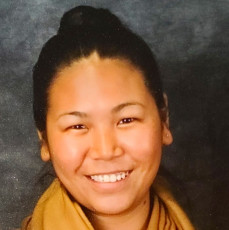 
Finding a Way to Recycle and Reuse

This summer, I had many goals for WAP. I organized my goals by priorities and assigned each week to have a theme to work on them. Week 4 was dedicated to achieving one of the most important goals for this summer: reducing the use of plastic in WAP soap making. With this aim, we dedicated the week to brainstorming ideas, researching, and visiting vendors and stores. This was an important goal for two reasons. First, using plastic was not a sustainable business practice as the cost of plastic was high in production. Secondly, reducing plastic use can help WAP expand its funding potential and opportunities.

Constance, Dickson, and I started the week by discussing what could be done. In our conversation, we realized that our goal should be to reduce the use of plastic bottles in soap packaging. WAP soaps are packed in 750ml plastic bottles. These bottles are the biggest source of plastic used in production and account for one of the highest production costs. 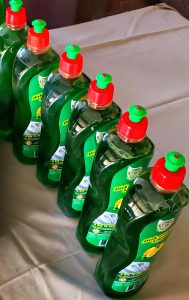 While brainstorming, one of the first ideas I shared was about refill sachet for soap. This idea came to me when I went to a supermarket to grab some snacks during my first week in Zimbabwe. I was walking by the dairy section in the store when I saw milk sold in sachet packages. This gave me an idea of having a similar approach to making refill sachets for dishwashing soaps. This would reduce the use of plastic and also be cheaper to produce. Dickson and Constance liked the idea, and we started working on it.

To have a better understanding of the sachets, we decided to start by visiting a distribution center for a milk production company. This company made milk and yogurt in sachets. An agent at this company directed us to a plastic packaging vendor they use for their dairy products. It was called NatPak Packaging Solutions. The same day, we visited NatPak to understand what they do and if they can help us with our vision for sachets. We met a very friendly and helpful sales agent Pepe. She was very thorough and helped us understand that what we wanted to achieve was not possible in Zimbabwe yet. A similar concept is used by a South African company that makes soaps, but in Zimbabwe, no packaging company makes those soap sachets yet. Though we were a bit disappointed to learn that, we were also thankful to gain more knowledge about packaging and build a good relationship with Pepe.

After that, we shifted our focus to see what else could be done to reduce the use of plastic. We started brainstorming again, and I began asking questions about the bottle caps. I learned that the bottle caps are bought separately from the bottles. Each of the caps costs $0.12, which is a big chunk of cost for a bottle of soap that is priced at $1. Constance also explained that almost all soap companies use the same type of bottle caps. This made me think about a promotion for bottle caps and focus on recycling and reusing them. We talked as a group and came up with the idea of giving incentives for customers to return the bottle caps to us. We decided to create flyers to ask customers to bring 20 usable bottle caps; in return, we would give them a $1 or one free bottle of Clean Girl Soap. I designed a promotion flyer, and WAP printed 500 copies. We have included the flyers in each case (6 bottles in one case) of soaps that will be delivered to the markets soon. We will also hand out some of the flyers to the WAP participants so they can distribute them during their door-to-door sales. WAP will sanitize the returned bottle caps and reuse them in production. We are excited to see what the result of this promotion will be. If it works in our favor, this new strategy will help WAP reduce the use of plastic and the cost of production overall. 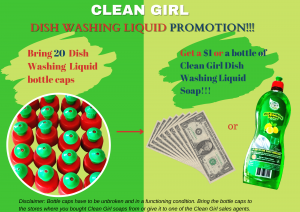 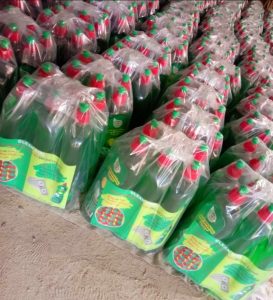 We included a flyer in each case of soaps that will be delivered to the markets.