When I arrived to Gulu via the bus from Kampala, I expected one of the first things I saw to be “the toilet” located in the bus park. The toilet, I’ve heard about for months. A toilet which began its conception in 2011, when Rebecca Scherpelz, the then-GDPU fellow, wrote a raw blog describing how a person with certain disabilities would have to use an average toilet in Uganda; essentially, crawling on their hands and knees into a public latrine. A degrading and unhygienic necessity of life, despite access to water and sanitation being considered a human right by many institutions, including the UN Human Rights Council. An access to a right, which is extremely difficult for many persons with disabilities.

Alas, I arrived to Gulu envisioning arriving to the bus park to see a long ramp and hopefully an accessible toilet, although I was fully aware of what could have happened within this last year. Instead I was disappointed when the bus dropped me outside a grocery store along a red dusty road. With a quick call to the Project Coordinator, Ojok Simon, I was picked up by GDPU and drove off to the hotel. Although I was determined to find this toilet in all its glory, my jet-lag took over and I quickly drifted to sleep once I reached the hotel. 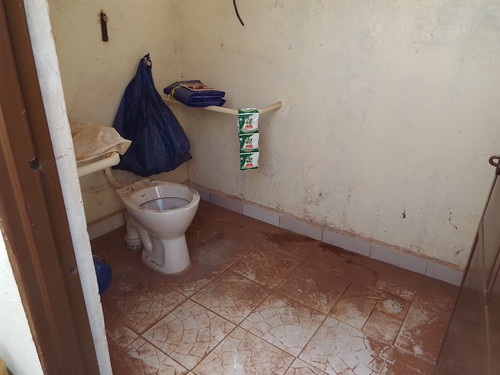 The next day after a short staff meeting I made sure to ask Simon to see the toilet. After a quick boda-boda ride, a motorcycle taxi, we entered the bus park from the lower entrance. The toilet wasn’t immediately noticeable, hidden behind a building along a concrete path. We greeted the vendor and he took out his keys, which I immediately knew that couldn’t be a good sign. I asked if it was okay to take pictures and internally noted how strange it must be for a “muzungo” (foreigner) to take photos of a public toilet.  We stepped into the entry way to the toilet to find water jugs lined up in the hall, surely not accessible, to find the piping to the toilet completely gone and dust covering the entire room. Through discussions with Simon and the vendor I found that the bathroom has been in this state since March. Although this initial news was certainly discouraging, the site is not beyond repair.

So what’s next on the mission to accessible and sustainable toilets? In order to move forward in our mission, we need to create more accessible toilets, we need to understand both what was successful with this project and also the exact weaknesses, especially in design and sustainability. This is my next mission.