Former Liberian President Ellen Johnson Sirleaf has urged Liberian Ebola Survivors to raise their voices louder than they have been doing to attract Government’s attention to their plight. Though she notes that Government alone cannot meet every need; communities and individuals, she says must bear responsibility for their own issues.

The Former President told me over the weekend that there is not widespread information within the policy making circles about the plight of Ebola Survivors; but recognized that catering for their concerns remains the responsibility of the Government. The Former President said Government may have many competing priorities and resources required to deal with survivors’ issues may not be properly allocated.

She however urged survivors themselves to make use of the Government structures, using their local district representatives to raise their concerns with the National Legislature that she says is responsible for budgetary allocations. The former President noted that to solve public problems, public policymakers must know the problems; and to know the problems, public leaders must have sufficient information about the problem. The lack of this information on Ebola survivors, she says, may be affecting what action Government can take to respond to their concerns. 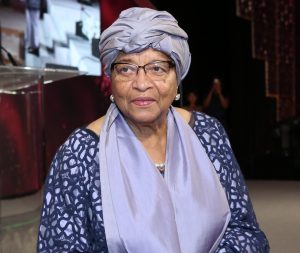 Former Liberian President Ellen Johnson Sirleaf; she spoke with me over the weekend at her residence in Monrovia

On the global response to the coronavirus pandemic, the Former Liberian President fell short of casting blame on any institution or Government, but indicated that “we were all caught unaware; we were not prepared for this, we did not anticipate this; you can imagine wealthy and powerful countries like the United States were scrambling for protective equipment, ventilators and masks at the time the pandemic struck; so no one is to blame; but we all take responsibility for the situation.”

The Former President indicated that an earlier response by the world would have prevented the global pandemic. She praised the human resilience to deal with challenges, indicating that “we will come out of it; there will be lots of damages done as we have already seen to economies and to lives, but we will come out of it.”

The Former President praised the African response to the pandemic; noting Africa’s effort to pioneer COVAX-the global coronavirus vaccine platform to service poor countries. While she condemned the global imbalance in access to vaccines, Mrs Sirleaf urged poorer countries to better allocate their resources to scientific research and pandemic preparedness; noting that every State has its first responsibility to its citizens.

Mrs Sirleaf told me that she was pleased with Liberia’s response to the coronavirus pandemic. As she hoped, the current leadership, she said, drew on the incident management system that her administration had established at the time of the 2014-2016 Ebola epidemic. She referenced, in particular, community health workers who she said sprang to action once covid-19 hit Liberia; this, among many other efforts, she attributes to Liberia’s relatively better performance in its covid-19 response.

In terms of calls for reparations to survivors of pandemics and epidemics, including for Ebola survivors in Liberia to be paid reparations, the Former President said the best reparations to victims and survivors of health crisis are stronger health systems that can both respond to their needs and absorb the shocks of subsequent crisis.