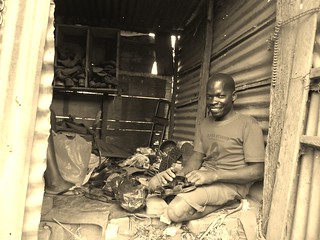 Francis Ojara, 26 years old, has been repairing shoes next to the GDPU gate for five years. His smile and positive outlook are infectious. He started his business with just a sewing needle and thread sitting under a tree. His business progressed and he has slowly able to buy rubber soles and other products before acquiring construction materials to build a temporary structure. Francis has big dreams of returning to school and continuing among the other students before taking the skills he learned to the village to teach other PWDs technical skills “so that they too can become somebody.”

As I asked Francis about his years in school, his life like almost all in Gulu, recounts the struggles of the LRA occupation with the added challenges of having a physical disability. During the occupation both of Francis’ parents were killed while attempting to go back to their garden in the village. In senior school Francis attended a boarding school for those who had been displaced. The administrators at the school told him not to attend as they did not have the services for PWDs, but instead of being discouraged Francis got in touch with the GDPU chairman at the time. Francis and the Chairman then, rightfully, convinced the school he could learn the same as his other classmates. Francis notes that this was before rights of PWDs were recognized. Instead, at this time most people believed that having a disability was a curse from god.

Although Uganda has progressed, Francis still believes the community needs greater awareness of services required by PWDs. Churches he explained, while supposed to be a place of acceptance, are extremely inaccessible to PWDs. He has moved church to church and not one has had an accessible toilet. In the community there are so many types of people he explained and all disability is different, some not even visible.

When I explained to Francis that my goal in Gulu was to work on models of accessible toilets, he agreed it was a worthwhile mission in that it would open the eyes of many people without disabilities to the types of serviced needed by PWDs. He also explained if someone used the accessible bus park toilet, if they for example had a brother or sister with a disability, that they could build a toilet similarly and increase accessibility for a family member. For Francis he tells me he uses the facilities at GDPU which are accessible with a wide opening and a sitting provision, but using other toilets is “extremely terrible.”