Kenza Elazkem was born and raised in Marrakech, Morocco. She later moved to the United States to finish high school and pursue a degree in Political Science at the University of Texas in San Antonio. During her undergraduate studies, she participated in an exchange program at Hanyang University in Seoul, South Korea. Kenza's interest for development started then. After completing her degree, Kenza joined the Carter Center for an internship in the field of democracy and election observation. She is currently pursuing a dual master's degree in International and Sustainable development between Hankuk University for Foreign Studies in South Korea, and the United Nations University for Peace in Costa Rica. Kenza taught English at a rural primary school in Costa Rica and also joined a women's Capoeira collective. She is eager to learn more about the world and enjoys cooking, traveling and sharing. After the fellowship, she wrote: "The best aspect of the fellowship was to see the process of carpet making and sharing meals with the women's families. Through the fellowship, I have learned the NGO jargon in Arabic. I am also more aware of my surroundings and pay more attention to detail now." Contact: kelazkem@advocacynet.org

One quiet afternoon, upon a candidate leaving, Jamila, Fatima and Mahma are sitting in front of their looms each one weaving her respective carpet. Mahma is singing as usual and Jamila and Fatima are chatting in Amazigh, the native language of Morocco that I cannot fully understand when suddenly they switch to Arabic.

Jamila: I’m going to run for elections in the next term, who’s with me?

Mahma stops singing and looks at her: I’ll vote for you. Which party are you going to register with?

Jamila: Well, I kind of liked the guy from the “Dove” party but I’ll stick with the “Book”, they’re the ones I am most familiar with. What do you say Fatima?

Fatima: Hmmm I can run on the same ticket as you.

Jamila: Well I’m in District 2 and you’re in District 3, so how about we each run in our districts and rally for the same cause?

Fatima: That’s a good idea, what’s your cause? I want to know before I get into anything.

Mahma: What do you mean?

Jamila: Well, we now work outside of the home, right?

Mahma and Fatima both nod at the same time

Jamila: I say that house work needs to be split as well if outside work is being split. I mean that one day you, Mahma, prepare the Ftour and one day your husband does. One day you clean the house, the next he does and so on.

In the meantime, Khadija has entered the room and has been listening.

Khadija: But our work outside of the house is not the same, we are still sheltered in this cooperative and do not have to be out all the time.

Jamila: What do you mean? Doesn’t your husband have a doughnut shop where he is sheltered all day? Maybe Mahma can say something about this since her husband is a forest guard.

Khdouj comes in and says: Well Driss used to help me in the house until my kids got old enough to start making fun of their father for doing the woman’s job and now he stopped.

Jamila: You’re the one who asked of your daughter to help you with everything around the house and never asked your son to help even if he is the oldest one.

Fatima: Well ladies, it is time for me to head home and start preparing the meal.

The other ladies start packing up as well.

Jamila: Alright, you go run around that kitchen like a crazy person while he takes a nap as he comes back from work just like you did.

Mahma: I don’t know that we have the choice.

Jamila: I know. I have to go help my mother as well. My brothers don’t come home until it is about time to eat. Hopefully, someday the situation will change but remember, we have to be part of that change. 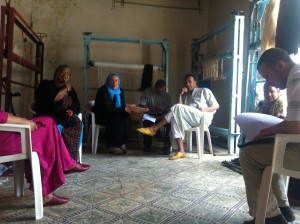 The electoral candidates meet with the women of the cooperative to try and gain their votes.

Rachida: I heard the police came to your alley yesterday. What happened?

Khdouj: Yeah they came here and caught what’s-her-name with a man from the Sahara region. Someone, you know, her neighbor, told on her to the “Ikhwaniyyinn” and they came and locked her door from the outside and then went to the police who came and took them to the town jail.

Rachida: Iwa Allah yester, may God preserves us all.

I have a vague idea of what the women are talking about but choose not to say anything. I am sitting next to Khadija and she looks at me asking if I understood. I motion my hand and say: So-so…

She starts explaining: Well you know how Ain Leuh has been known for centuries for prostitution.

Me: Yes but they are not here anymore.

I had heard about this. I had seen a film called “The Dry Eyes” depicting a women-only village in the Middle-Atlas region where men from other villages would come to spend one night each week with the women. Each day of the week was reserved to the men of a specific village. The women would cook a meal, entertain the whole night and have sex with the men. Whenever one of them gave birth, they would keep the girls and give away the boys as the weekly market of the region. I am not sure to what extent this is true but stories like this are common in Morocco.

As for Ain Leuh, it is a bit different. The village sits on top of hill overlooking plains filled with agricultural land. Some 5,000 people live here of all ages and sexes. The French used to have a small base in the village. I do not want to attribute prostitution to colonization but I am guessing the organized prostitution, where certain streets and districts of the village were reserved solely to prostitutes has something to do with the base being in town. However, these streets and districts seem to have disappeared. The New York Times ran an article in 2012 about the situation http://www.nytimes.com/2012/10/30/world/africa/moroccan-villages-war-on-prostitution-draws-critics.html?_r=0

Khadija: Yeah the “Ikhwaniyyinn” took them out but there are still very few of them.

Me: What do you mean they took them out? How could they do that?

Khadija: Well they went to the judge asking him to “clean” the village. The judge told them that even though prostitution is illegal, he couldn’t do anything since the economy of the town relied on it. He would need a petition signed by the majority of the village to do so. So the “Ikhwaniyyinn” started a campaign against the high prices of water and electricity. Their main argument was that water is abundant in the village and the dwellers shouldn’t have to pay such high prices for water. They told us to come sign a petition in the village’s square. Of course, we went and signed the petition without reading it or knowing what was written on it. It was all done legally but we were duped.

Me: Could you not tell the judge that they took advantage of the people?

Khadija: Well, we weren’t ready to admit that we were tricked, plus do you really think anyone is going to go in front of a judge asking for prostitution to stay in town?

Me: You’re right, not only is it illegal but it is also against the societal norms in a way.

Khadija: Exactly! So they started removing them little by little.

Me: Where did they take them?

Khadija: Most of them were not from here so they only put pressure on them to go back to their towns. Then the Ikhwaniyyinn told those who owned their homes to stop their practice in return for 300 dhs (around USD 30) a month.

Me: How can they live on such amount?

Khadija: That is the biggest problem. No one can live on so little money and they did not give them an opportunity to work in anything else. And they’re not the only ones suffering. The whole town’s economy has gone down since this happened.

Me: What do you mean?

Khadija: You know the street adjacent to the cooperative? That used to be a prostitution street. The men would come out of there in a good mood and buy our products for their wives and mothers. We haven’t been able to sell anything from the cooperative since the Ikhwaniyyinn came into town. We used to make a little bit of money at least. And we’re not the only ones who are having a hard time. The butchers are not working anymore. You know, the women would organize parties for their clients and so the butcher would sell them meat, the grocer vegetables, the musicians would play music, some women would cook in their houses and sell them the food and so on and so forth. They were really supporting the town.

Me: And who are these Ikhwaniyyinn?

Khadija: They are young men from Ain Leuh who were lucky enough to get good education to be able to have jobs as teachers or government employees not to worry about the economy of the town. They turned conservative on their people and think they know religion better than us. 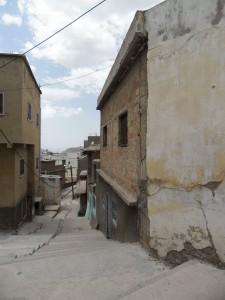 The street adjacent to the atelier of the cooperative used to be a popular prostitution district.