Getting to know Umoja

Although I’ve told the stories of Umoja, I haven’t gone into detail about individual women in the village.  For Rebecca’s trip to the Sante Fe crafts fair, I created two short profiles of Naibala and Nagusi, women who have been at Umoja from the beginning and who represent the strength and resilience of the village’s residents.  I want to share these brief biographies with you here, so you can carry them in your heart as I do now. 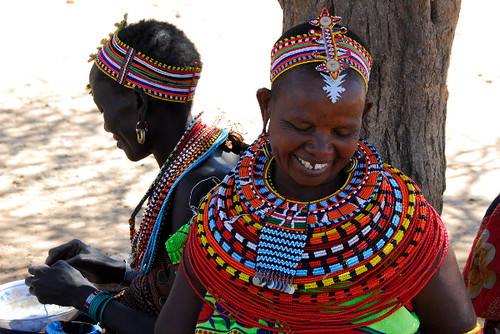 Naibala Lekermui is one of the first to sit down in the shade of the acacia tree each morning and begin her beading.  Others in the village choose a seat nearby so they can hear her jokes, her ready laugh, and her lively stories.  Naibala is a natural leader in these casual settings, and so it is no surprise she was one of the women who founded Umoja Uaso in 1990.

Before beginning this women’s village, Naibala, now 55, was living with her husband and his other wives.  “Every decision was made by him, she says about her husband, “he didn’t give me anything.  He only wanted me to give birth.”  After years of unhappiness, Naibala gathered her five children together and left her husband; after searching for a refuge and finding none, she and a dozen other women in a similar situation decided to create their own.  Now, nearly two decades after the founding of Umoja, Naibala continues to search for ways to improve the community’s well-being.  Vital Voices has played an important role in Umoja’s growth; it is because of their help, Naibala cites, that members of Umoja learned about women’s rights.  “In the Samburu tribe – women, they do not have their rights.  But, in the (Vital Voices) training, we were taught that we can be in politics – we also have the right to be counselors and chiefs.  We have that chance as women.”

Now, mothers in Umoja have aspirations for their daughters to become local community and government leaders.  And these hopes don’t stay within Umoja’s gates; women in the village regularly visit neighboring Samburu communities and share what they have learned from Vital Voices.  For women in nearby villages, Umoja Uaso represents a future that was previously unthinkable.  These regular visits spread the seeds of awareness and empowerment that have blossomed in Umoja’s residents. Naibala sees Vital Voices as instrumental in the continued success of Umoja: “We cannot forget Vital Voices because, even if they are not here, they have taught us and we will also teach our children. We will not forget until the end of our lives.”  What is next for Naibala, for Umoja?  Naibala laughs, the beaded rings around her neck swishing softly. “We want education – more and more.”  There is little that can stop Naibala now when she imagines what is possible. 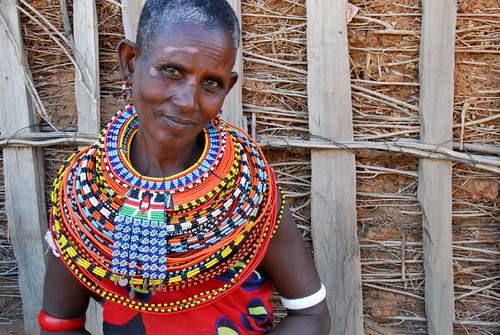 Nagusi Lolemy often works alone or with a handful of women, smiling at passersby as she adds another round of beads to the colorful necklace in her lap.  Her influential role in Umoja is not immediately apparent, but spending some time with Nagusi as she beads reveals her wisdom and resilience.

Nagusi married young, to a man of her family’s choosing.  Nagusi often herded her husband’s cattle in the expansive territory around their village, in areas that were sometimes patrolled by the British Army.  One day a group of soldiers came across Nagusi in the bush, and raped her.  She was left in the desert, unable to move; some women found her and brought her back to the village.  When her husband found out what happened, he refused to allow her back into their home.  Nagusi left her village, uncertain of what would happen next. Traveling from place to place, Nagusi met other women who had faced similar hardships and they, too, sought a refuge and place to call their own.  It was in this way that Nagusi became one of the founding members of Umoja Uaso.

There have been many improvements in life at Umoja since Nagusi and her friends made the decision to form a village independent of their husbands.  Nagusi, 56, takes great pride in supporting herself and her seven children with the jewelry she makes.  Depending only on herself for an income means Nagusi can make important decisions about her household – particularly about her childrens’ education.  Nagusi imagines a different future for her daughters – one where each girl attends school through college, and has the opportunity to hold positions of power in her society.

Nagusi sees the advancement of her craft as the foundation for her children’s brighter future; this is why, Nagusi says, the Vital Voices training has made a difference.  Before the training, women were making all their necklaces with wire; during the training, they learned about using thread to make the pieces more flexible and comfortable.  Vital Voices and Umoja artisans exchanged ideas about modern styles and traditional Samburu fashions, coming up with innovative designs that combine the vibrance of Samburu culture with contemporary tastes.  Nagusi believes it is this kind of support that guides Umoja towards greater economic sustainability.  “Nowadays,” Ngausi says, “we are gaining knowledge and trying to change.”  She bows her head thoughtfully, then lifts it up with a triumphant smile.  “We are now improving.”