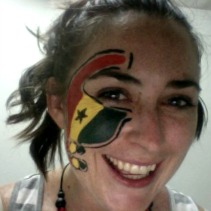 Josanna Lewin (Vital Voices - Business Women’s Network hub, the Eagle Women Empowerment Club (EWEC)). Born and raised in Hawaii, Josanna studied in Costa Rica for 6 months with the American Field Service (AFS) in 1998. She received her BA in Political Science from the University of Colorado at Boulder in 2004. Upon graduation, Josanna spent a year working as an English teacher at the Universidad Central de Ecuador in Quito, Ecuador, and in Italy. Josanna spent three years working in San Francisco in the business development field. She is fluent in Spanish and has worked as a Sexual Health Educator with the Marin Aids Project (MAP) for at risk Latino youth. At the time of her fellowship, Josanna was pursing her Master’s in Public Administration AT the Monterey Institute of International Studies (MIIS). After her fellowship, Josanna wrote: “It has been a summer of learning, sharing and laughing with some incredible women. They are beautiful women and it is these women, these mothers, these sisters, these leaders, who are the future of Africa. This was a truly incredible summer and I’ve had such a positive experience. I’ve fallen in love with Ghana!"

Like Ghanaian clockwork, the meeting started very late. “Ghana Time” is a concept that has taken me some getting used to.  Whether you’re going to a social event, an appointment to get your hair cut, or a very important business meeting, inevitably things will start later than anticipated.  Much, much later.  I’ve had several weeks to consider why exactly this is the case and while some of it can be attributed to a relaxed Ghanaian culture, a large part of it is due to unpredictable weather in a developing city that battles unreliable public transportation, bad roads and heavy traffic.

On Thursday evening of last week, Accra experienced very heavy rains that persisted throughout the night and into the day on Friday.  With a city largely webbed together with dirt roads and a lack of efficient drainage systems, this can mean travel that is slow going and at times impassable. It can also mean long and uncomfortable Tro Tro rides met with muddy walks and more rain.  Particularly in a country where people greatly pride themselves on their crisp attire and spotless appearance, traveling a few miles in the rain might appear daunting.   What is remarkable about days like this, however, is the people who bare the weather, mud, and long journeys to arrive at their appointment, albeit often late, looking sharp and ready to go.

And so on Friday evening of last week, I had the great pleasure of meeting some of Eagle Women Empowerment Club’s most committed members.   Coming from as far as eight hours away and bravely traversing the elements in dresses and heels, approximately 30 proud Eagle Women members gathered together at The Hotel Wangara for one of EWEC’s quarterly meetings.  Set in a small conference room with chairs, a podium and projector, we discussed EWEC’s previous activities, introduced several new programs (me being one of them!) and conducted a brief informational session on taxation and an EWEC Rewards Card.

I was able to introduce to the group the Vital Voice’s Baseline Survey and member profiling that I’ll be starting later this week.   I received a very warm reception from members and am excited to get into the field to better understand their backgrounds, struggles and successes.  There is certainly a diverse mix of Eagle Women, however one thing is very clear.  All of these women are strong, independent women who have conquered a great deal to be where they are today (weather issues aside!).   I look forward to learning from each of them over the next few weeks.