I carried a quilt with me composed from three pieces. Three members of the community of Sacsamarca embroidered each piece. Sacsamarca is known as one of the first community that stood against the Shining Path, a communist party. Now, it was the time to give it to the community. However, I did not know how the people would react when they would see the quilt.

It was 7:00pm when nearly thirty people got together in the hallway of the City Hall of Sacsamarca. When they saw the quilt, one person said that “this is a treasure for us, and we should frame it, and put it here in the City Hall that all people can see the great work.” I liked his idea, and I hope that the quilt will be framed soon. 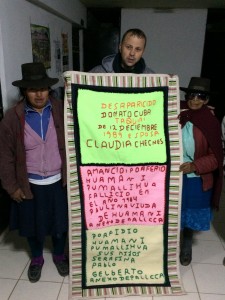 Giving the fact that many people came to the meeting, I thought that they were united and supported each other, especially those people who have lost their family members. But, soon I found out that many of them came with different concerns. Some of them wanted to know about the reparations that the government gave to the victims, and how they can use these benefits.

The reparations were not equally distributed. Some victims collected 900 soles (approximately $268), and others collected a maximum of 10,000 soles (approximately $2,976). The government decided the amount based on the family members. If a family had four, five or six children, the family would receive the maximum amount, but if somebody had one or two children, he or she would receive 900 soles. The reparation was distributed in different forms: in money, healthcare, and education.

Throughout the meeting, which lasted for two and half hours, I could notice that people were not well informed about the reparations, and how they can use them. Throughout the meeting, Gisela Ortiz, who is the director of operation for Equipo Peruano de Antropologia Forense (EPAF), was bombarded with many questions. Some people were complaining that the mayor of Sacsamarca does not inform them about anything that is related with the conflict. In fact, the Mayor did not attend the meeting, and as a head of the city, knowing that many people in Sacsamarca have been killed, he should have been present. It is true that more than thirty years have passed since the conflict, and perhaps some of the people got saturated with this subject, but this is one chapter of the history of Sacsamarca and other communities that has been written with innocent blood.

If the communities and people who have been victims do not stick together and advocate against such horrendous atrocities, other conflicts might take place in the future. In fact, nearly 16,000 people are still missing and nobody knows where they have been buried. It is awful to believe that sixteen years have passed since the conflict ended, and where the missing are buried has still not been identified. It is also true that no matter how much support the victims might receive, nobody can bring back their loved ones. But, people and victims should support each other in order to move forward with their lives. 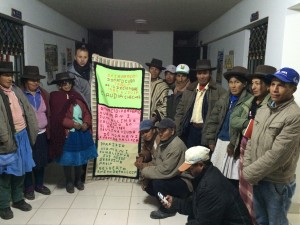 Finally, Gisela told them that a person would be assigned to an office in Sacsamarca who will be exclusively at the disposal of the victims, and any person can come and inquire information regarding the conflict and the reparations. It is hoped that this person will take office soon. We ended the meeting at 9:30pm, and the majority of people were happy that they got answers to their concerns. 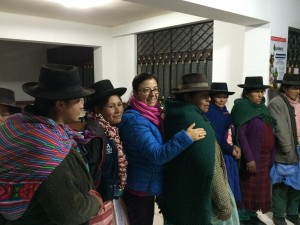