Israeli and U.S. flags wave as Jerusalem’s evening winds rustle through the crowds collecting to watch an enormous screen displaying Glenn Beck’s speech taking place in another part of the city.

Sitting in the back of the crowd with my notebook and pen, I exchange amused looks of disbelief with my colleagues scattered around the fringes of the audience as Mr. Beck launches into emotional speeches about justice, human rights, and responsibility. Over the span of an hour, he cries four times. My fellow journalists are lined up in the back, rolling their eyes and giving exasperated snorts of disbelief as Glenn Beck pats Israel on the back for its courage and faith. He highlights Rami Levy’s shop in the illegal Israeli settlement of Gush Etzion as a “model of coexistence” for allowing Palestinians to shop there and proclaims that “Israel is here because of God’s promise.” 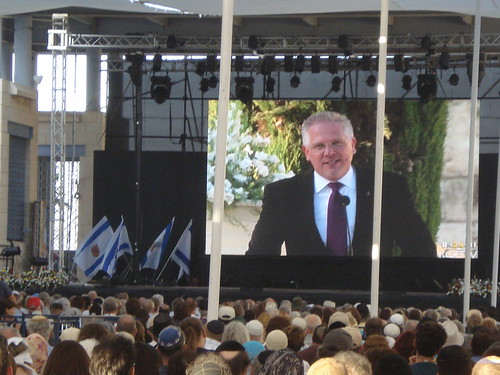 He then attacks the international community for speaking out against Israeli violation of humanitarian law while letting countries like “North Korea, Libya and Syria” get away with oppression and the slaughter of their own people.

Using Mother Teresa and other humanitarian figures as examples, he says “They gave their life for human rights. They fought for justice and freedom.”

“We need people who tell the truth,” he shouts out to the waving flags and clapping hands. My colleagues and I stare at each other pointedly. It’s almost painful to hear. In a country where the truth is held down tightly, pinned to the ground by Israeli soldiers, we couldn’t agree more, though our opinions on where truth is to be found differ widely from Glenn Beck’s. We see the truth written on the walls of the separation barrier and scrawled onto the hearts of innocent civilians quietly passing their years in the confines of Israeli detention centers. We see it flickering in the eyes of the oppressed and in the activists, journalists, and ordinary citizens who transcribe it and are subsequently beleaguered and belittled.

In a country where journalists and activists tread carefully, often giving fake names and using cover stories, Glenn Beck’s words ring true. The context and meaning however do not. In a twist of bemused irony, much of his speech would be somewhat logical in the context of the Palestinian struggle. Flipping it around though and celebrating Israel for its fight to promote justice, freedom, faith, and “human responsibility” is simply laughable. The story Glenn Beck portrays is horrendously one-sided, naive, and in many instances…just plain wrong. 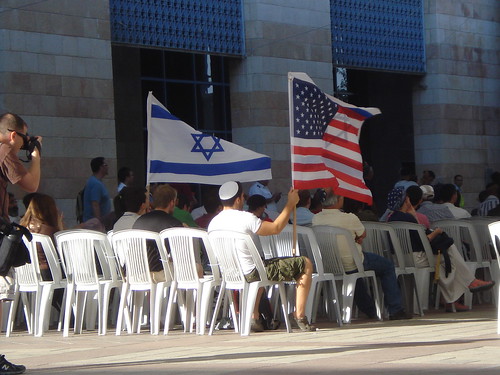 “You were not born so someone could rule over you,” Beck shouts out to the Israelis.

Less than 10 kilometers away Palestinian civilians stand doggedly in a crowded line at one of over 700 checkpoints in the West Bank. Israeli soldiers look over their permits and IDs, scanning their fingerprints, before telling them whether they can go home or not. Beck wipes a tear away, his face contorted with emotion. 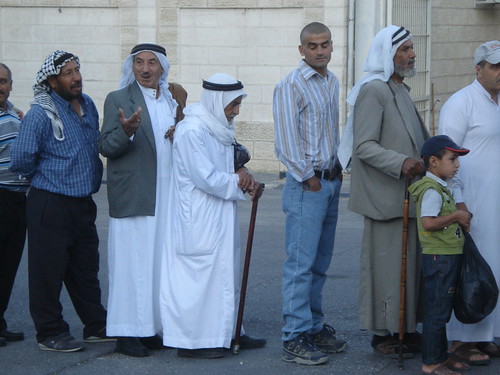 “Every single life is sacred.” The crowd–primarily American*–cheers. Repeated air strikes in Gaza have left thousands dead. Settler violence is increasing against civilians.

“What we value is under siege,” he continues, “Darkness is spreading. Far too many politicians are too willing to look the other way…It’s no wonder the children of the world are setting their streets on fire.” His hypocrisy reverberates against the rubble of demolished Palestinian homes in East Jerusalem.

While Beck applauds and commends Israel for its noble struggle, Palestinians are resolutely piecing their lives together, rebuilding homes demolished dozens of times and replanting olive trees uprooted for “security reasons.” Israel’s so-called “noble struggle” is only serving to fan the smoldering embers of a people burned too many times.

*It should be noted that Glenn Beck is not especially popular in Israel at the moment. Particularly after he lashed out at the Israeli tent protesters. The extreme right-wing appears to be fond of him, but from what I can gather, it seems most people wish that he would just stay home. I know the feeling.