Chelsea Ament (Women’s Reproductive Rights Program – WRRP): Chelsea’s interest in advocacy developed into a passion after entering the McMaster University B.Sc.N. program, where she was able to broaden her view regarding social justice and global health. It was during this time that Chelsea embarked on a ten-week clinical placement at a government hospital in Pokhara, Nepal. Chelsea also obtained a diploma in nursing at Mohawk College. Prior to her fellowship she spent three years working as a surgical nurse at Joseph Brant Memorial Hospital in Burlington, Ontario, Canada. Chelsea’s fellowship was supported by Human Rights Internet in Ottawa. After her fellowship she wrote: “[I learned] to be very flexible, and that just because a plan or project goes nothing like you expected it would does not mean it was a failure.”

Meet Anju Rai, a WRRP campaigner. Campaigners are advocates that go door to door within their community, educating their neighbours regarding uterine prolapse, nutrition, and reproductive health, as well as engaging their peers in dialogue regarding these topics. Training and sending out these individuals is part of WRRP’s preventatives strategies for reducing uterine prolapse.

We went to meet Anju during my previous visit to Lahan. Her village and working area is in Siraha district, which is located along the Nepal-Indian border. Anju was one of the painters in last year’s advocacy quilt project, where a group of women painted panels that displayed different scenes of discrimination and life within their communities.

It was a long two hour commute in the blistering heat to visit Anju in her village. Once we arrived, myself and Shubhakamanaa,  WRRP colleague, were observed with interest by the local villagers. We were soon greeted by Anju’s daughter, who brought us to her home. There, after a brief introduction and pleasantries, we sat under the trees in Anju’s backyard and proceeded with the interview. The woman shown in the photo below was doing laundry at the water pump right beside where we were conducting the interview. It was interesting to be doing an interview about uterine prolapse and discussing early marriage, while a 20 year old five month pregnant woman did her laundry a few meters away. 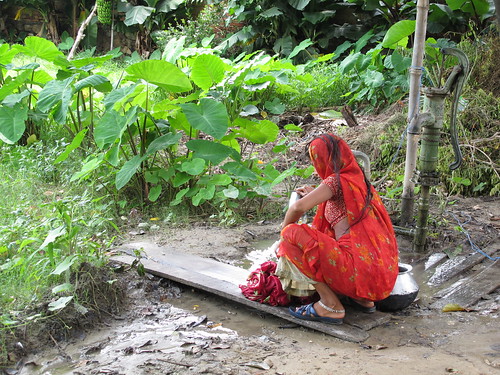 As I cannot speak Nepali, Shubhakamanaa had to act as translator throughout the interaction. One of the many interesting points that arose during the interview was how traditional beliefs can increase a woman’s chances of having uterine prolapse. For example, Anju described how during pregnancy, women avoid eating green vegetables because “people have a concept that if they have green vegetables during their pregnancy and delivery, the umbilical cord won’t come out”, or “they think that if they eat green veggies during pregnancy they may catch pneumonia.” Poor nutrition affects a woman’s ability to heal after the pregnancy, hence increasing the likelihood of uterine prolapse. Anju also noted that “in the houses where the family agrees and accepts the information, we can see a lot of improvement, but those who think this is not a topic of our concern, we don’t like this, we don’t want to know about nutrition and vitamins, there is no improvement at all. But we are trying our best to convince them of these things and inform them”.

In the video below, Anju shares a positive experience she had during her door to door campaigning, as well as discussing early marriage as a cause of uterine prolapse in her community.